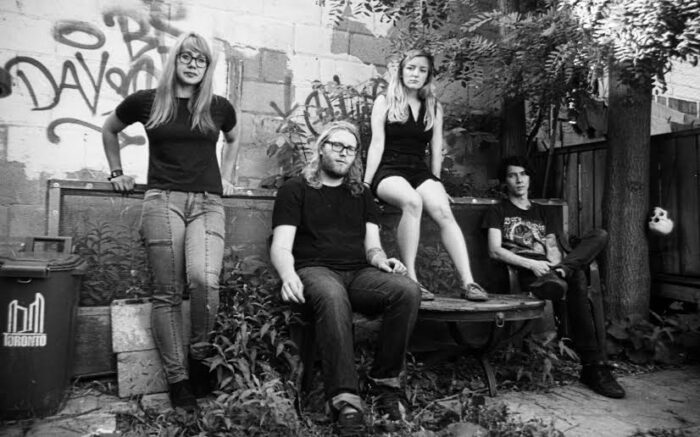 After spending a while submersed in deep, dark alternative reality, HSY’s Jude emerges to talk to Louder Than War about their recently released LP Bask.

In the shade on some church steps and on the eve of their new record’s release we discuss his band’s sinister sound, his disliking of Springsteen, plans to buy a hollow-body guitar and much more.

But first a few words about said album on which the Toronto band create an eerie vortex where things hiss and slither with a sense of forboding and madness. From driving, unconventionally danceable songs like “Sally,” “Cyber Bully” and the creepily jerky “Feeder” to the incantations and rants on tracks like “Borg” and “Interlude”, Bask scrapes and scratches, monstrous and menacing.

The band touch on a mishmash of loud ‘genres’, experimenting with aspects of industrial, metal, noise and post-punk to create their own sound. The atmosphere echoes heavy, musty and static. Press play on the soundcloud embed below to check the album out in full, then dive straight into the interview.

Lisa Sookraj: HSY offer up industrial sludgey post-punk noise. It’s fearless and kinda ugly and messy, but there is method amidst the madness because there are definitely addictive properties too. Like many of your fellow Buzz bands, there’s a strong sense of innovation, experimentation and articulacy – it feels like you know where you’re coming from and more importantly have a clear idea of the vision you have for your sound. You’ve got this nightmarish, dingy and dirty atmosphere. What’s behind your aesthetic and how would you sum up your artistic vision?

Jude: A lot of it is music. I grew up in the country and had a lot of time to listen to Lynyrd Skynyrd and classic rock. I loved that for first part of life, grew into loving Nirvana and grunge stuff, Skinny Puppy, Swans and more industrial shit. But what’s really behind HSY is discontent. I’m agitated with the current state of things. When the band first started there was a lot of mainstream things like Grimes. Super kinda poppy electronic stuff, not that it’s a bad thing. But when we started to do songs I knew we didn’t want to do that. We wanted to be aggressive. I don’t want tons of people to like us. It’s basically, take it if you want. If not, I don’t really give a fuck. I’ve come to realize in my life I don’t need to impress anyone.

You once told a tale about the craziest thing that happened to you on tour – which was staying in a tow truck driver’s un-finished garage where you feared for your lives. This feels pretty akin to a lot of the feel of your songs, you capture and convey this mood intimately. You present a dark sense of reality to listeners like some unconventional gift. Things that come to mind are sketchy alleys, warehouses, bad drug trips, getting yourself into dangerous situations with a sense of psychosis.

But you’ve also said that the rough part of Velcro is what ‘creeps you out most’. This sense that horror is found in the every day suggests that you guys know how to tap into the mundane and channel it into something more imaginatively dark.

Is it safe to say your music addresses or explores the idea of these dark recesses of daily reality and if so, what are some of those dark common, unpleasant experiences that you pull inspiration from?

The mundane bullshit. Kinda like the Virgin Suicides – that idea that the routine of mundane life is going to keep going day after day terrifies the shit out of me. It’s also really frustrating, because a lot of the people I know at a variety of ages complain about things they don’t want to do. I think, why don’t you quit that job or not see that person? But I feel for them too. We all have these obligations to people relying on us.

Can you tell us about some of your favourite pieces of your gear that help you achieve the sound or feel you’re going for?

The thing that I feel defines my sound the most is my Electro Harmonix Holy Stain pedal. It’s a multi-effects reverb pedal. It was the first pedal I ever got playing with this band. I’m pretty rough on everything, but it’s outlasted all these pedals, guitars and amps. It still sounds as good as the day I got it and was given to me by a friend who didn’t want it. My actual distortion pedal was the 2nd pedal I got and I already had to replace it after it got destroyed when we played the UK last year. Brandon our bassist has more pedals than Anna and I combined. The drum pad we use is specific to our sound too.

You once referred to HSY as somewhat satirical. Can you elaborate on this idea?

The last half of Bask is more crushing and meaningful and pretty much the first half is satirical. “Scratch” was something I had in my back pocketI wrote when I was 15 or 16. It was about being that age and thinking you could pick up girls or do something, but you’re really just a little scum bag with this inflated ego about. “Sally” is about this girl I knew in high school that was kind of a mess. I feel bad sometimes that I wrote this song about her, as she’s my friend. It still kind of defines my generation at that point – when you’re a teenager in a small town, catholic high school. You have to push out of that and that’s what she did.

I was thinking that it’s hard to find stuff to go on a cool, non-cheesy Halloween playlist. What do HSY do for Halloween?

The last three Halloweens we’ve been on tour or been away, but we always want to play that Death to TO cover show. Last year when we were in Chicago they had a similar thing, bunch of bands dressing up like the bands and covering them. One of them did Springsteen. I can’t stand him. Everyone else was like loving it except for me, my skin was like peeling off.

Often on Bask you sound like this vicious thing, barking and growling. Can you explain how you feel your sound morphed into a meaner beast on Bask? And do you see yourself continuing along this path, or do you ever think about trying something else?

Like actually singing? *Laughs.* When we started I didn’t know how to do any of that vocal stuff. I wasn’t familiar with black metal but once I got into that, I found myself picking it up and able to do it.

I don’t listen to metal, but I find it’s the integration with other ideas you’re putting together that makes those vocals work. HSY doesn’t sound like any one thing. It’s similar to how Odonis Odonis put industrial, shoegaze and post punk together to make something interesting.

I feel like I can’t just do one thing or I get so bored of it. And I think Dean from Odonis and I have a similar mindset. He is a huge musical influence. Hearing their band thinking the drums sounded sick and cool made me to want to do something.

What’s your favourite song on your new album?

“Valour.” Anna and I put the most work into doing the vocals and Dean did a good job mixing it.

Would you rather be possessed by a demon or turned into a zombie?

Possessed by a demon. At least I’d have some control and be more powerful.

Instead of just wanting to eat brains you’d be like “How can I destroy some people’s lives?” On that note… who is the scariest public figure, politician or celebrity in your opinion?

Probably Stephen Harper. I’m terrified of Donald Trump getting into office as well. It feels like as soon as someone well off like that becomes president it’s the first step towards some new world order. I also don’t really like cops. They have guns and batons and I just have my hands, that’s a scary thought to me. But basically the entire Canadian government at this point.

Do you ever think of doing something drastically different from HSY?

I started listening to Townes Van Zandt recently, which opened me up and made me realize I don’t have to stick to just writing heavy music. I’m in the process of getting rid of one of my guitars so I can get this hollow-bodied guitar which is basically a country guitar to learn how to finger pick and properly play. I started HSY I started with some guitar skill, but I was finding it limiting. But since I started listening to Van Zandt and a wider range of music in general, it’s helped with writing.

What would you call your country-esque project?

Buck Righteous. I’d want it to be a mystery thing. No one would know it was that dude from HSY.