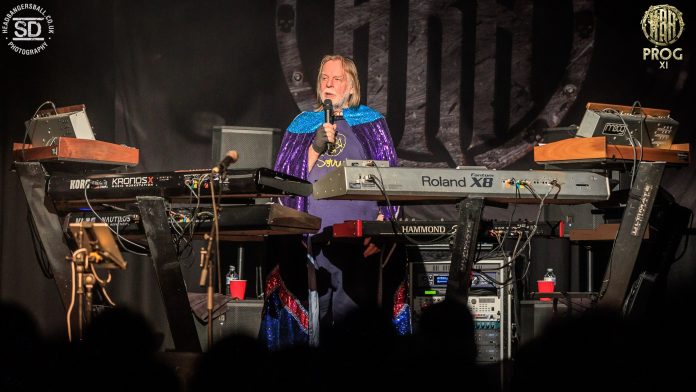 Progressive rock is a key part of our musical landscape, influencing and being influenced by a range of music genres from electronic music, through folk and jazz, to metal. So, it feels apt to have a two-day festival dedicated to this great music, in the form of HRH Prog XI.

The festival had to be postponed twice because of the pandemic. Finally, though, it has made it to the O2 Academy Sheffield, with an expectant and enthusiastic capacity audience, not at all perturbed by the spell of very cold weather that has arrived for the weekend. Here are our highlights from a great weekend of music, with a truly special line up.

Monkey Trial, a two-piece band based around keyboards and guitar, open the proceedings on the first day of the festival. They create an elegiac room filling sound. Most of the set, the band announce, is from their most recent album Viking, and on this performance this is an album well worth investigating.

Guitarist, Shaun Bailey, has a tone very resonant of the legendary Fleetwood Mac guitarist Peter Green. Their music live is an intriguing mix of ambient swirling keyboards, electronic rhythms, taped spoken voices, courtesy of Clive Mollart, and ringing guitar melodies. The band, from the stage, describe their music as soundscapes, reflecting the idea of place.

Their final number Proteus produces rolling waves of sound, with a great electronic pulse rhythm, and the guitar and keyboards wrapping around some intricate echoing phrases. A fantastic opening set to the festival.

Moon Goose, who are based in Hay-on-Wye in the Welsh Borders, can slide from heavy deep reverberating space rock riffs, driven by some great rolling drumming, to gentler progressive influenced moments. In the quieter passages, the instruments flow in and out of the mix, giving an other-worldly feel to the music.

The Mysterious Coffins Of Arthur’s Seat, from their first EP, provides a funk driven rhythm, with ascending guitar and keyboards flying out into the audience, sounding in many respects like the fabled progressive rock band Gong in full flight. Some of the instrumental passages also add in some interesting cross rhythms. This is a band that can create enveloping layers of music in a live setting.

The Spacelords are an instrumental trio from Germany who play a heady mixture of doom and psychedelic rock. Their live performance is very hypnotic, and with a groove that encourages dancing in the audience. Shimmering guitar sounds fly across deep rumbling bass and some fantastically inventive drumming. Their tracks build to a strong musical climax, receiving a very appreciative audience reception.

There is also a 1960s US West Coast essence to some of the numbers, with the lyrical bass lines and echoing melodic guitar, reminiscent of the legendary Quicksilver Messenger Service.

Hawklords, with their origins in the iconic space rock band Hawkwind, hit the stage with a frenetic live version of Speed of Sound from the 2021 album Time. Devil In Your Head, the second track in their set, combines a juggernaut booming bass, crashing drums and a heavy rolling riff. Add to that a rushing wind sound permeating the sound mix via the oscillators and audio generators played by Chris Purdon, and you have an incredibly epic sound. In a gripping conclusion to the song, all the electronics are left magically hanging in the air.

The band’s cover of Hawkwind’s Robot is fabulous, with the trademark space boogie Hawkwind sound, ordained with crashing cymbals and a spoken word section, which evokes the spirit of the late Robert Calvert of Hawkwind.

The Joker is evidence of a very well mixed live sound, as Jerry Richards’ sweeping guitar solo, floats effortlessly through the massive sound of the band. Unsurprisingly there is a lot of dancing at the front of the stage during a quite excellent set.

Carl Palmer’s ELP Legacy are a complete revelation. Starting with Emerson, Lake and Palmer’s (ELP) Karn Evil 9: 1st Impression, Part 2, and its classic introduction of Welcome Back My Friends…, the absolute power and precision of Carl Palmer’s drumming is immediately apparent. His drum kit with a double bass drum and two massive gongs, is set up centre stage, flanked by Paul Bielatowicz on guitar and vocals and Simon Fitzpatrick on bass and Chapman Stick.

An early highlight of the set is Knife-Edge from the first self-titled ELP album. Carl Palmer provides a palette of incredibly inventive percussion, which is a joy to witness, and Paul Bielatowicz a compelling keyboard like guitar solo. There is little doubt that this three-piece line up adds a fresh musical perspective to these great ELP songs. In particular, Paul’s guitar work provides an admirable interpretation of what on record and live often had Keith Emerson’s highly skilled keyboard work in the lead.

The band really charge at Hoedown from the Trilogy album, underpinned by some impressive bass work from Simon Fitzpatrick. Lucky Man, again from the first ELP album, is another standout in the set, with the synthesizer solo from the original album track, played by Simon on the Chapman Stick, with a lovely deep, melodic timbre. Carl Palmer provides some really engaging explanatory introductions to each song, and says before they play Lucky Man, that the band were always surprised when people called them Prog, as they played folk and jazz and other types of music.

On Fanfare For The Common Man, from the Works, Vol.1 album, Carl Palmer plays the fantastic drum roll, leading up to the very angular bass riff, that launches this great piece. Live, it has an incredible jazz swing, which illustrates Carl’s earlier point about the nature of ELP’s music. He then delivers a drum solo, full of crossing rhythms, using the full extent of the creative possibilities offered by his impressive drum kit set up, moving from the powerful to nuanced and playful, with at one point a flurry of bass drum and gongs. The audience is absolutely transfixed.

The band are allowed to go over time to finish with Nutrocker, and a well-deserved standing ovation, with Carl and the band coming to the front of the stage to acknowledge the reaction from the audience.

Rick Wakeman, Saturday’s headliner, walks onto the stage resplendent in his traditional sparkling cape, before walking onto the stage riser surrounded by banks of keyboards. He is joined by his musically excellent band, The English Rock Ensemble.

The first part of the set is a monumental take on the music from Journey to the Centre of the Earth, with the Moog synthesizer throwing out shards of sound into the audience as the introductory anthemic sound unfolds. There are some wonderfully melodic solos during the piece, particularly Lee Pomeroy’s funk driven bass solo, all unified together by Hayley Sanderson’s expressive vocals. The piece lasts around 20 minutes and is a stunning introduction to the set, in true progressive rock tradition.

Julia and Robot Man, written with Tim Rice, and from the 1984 album, provide contrasting musical settings, particularly Julia, with Hayley Sanderson’s heartfelt singing accompanied initially just by piano. Robot Man in another contrast has a soul orientation, with some very funky bass and clavinet.

Catherine Parr, from The Six Wives Of Henry VIII, has a quite wonderful alternating organ and synthesizer interplay, with Hayley’s wordless vocal soaring over the band. Rick comments to the audience that he has not been on so late in ages (the set began at 22.40) and is normally in bed, to considerable mirth amongst the audience.

The band then launch into extracts from The Myths And Legends Of King Arthur and the Knights Of The Round Table. It is a musically excellent rendition, of one of Rick Wakeman’s most loved musical works. With highlights including Rick’s jazzy piano solo, an operatic section led by Hayley, which really brings the accompanying lyrics alive, and a full on, quite awesome, progressive rock synthesizer solo.

The Yes classic Starship Trooper is a perfect and well received encore, with the musicians stretching out the song, with sympathetic solos that are fully in tune with the mood of this great piece of music. A great set to end the first day of the festival with.

Photography by Si Dunkerley, SD Photography/HRH, with thanks.

With thanks to Anne Robertson for her musical commentary and insight