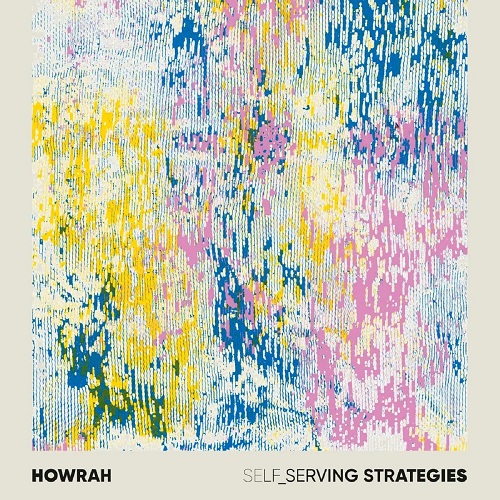 I should get this out of the way now. For me, Space Siren were one of the truly great Dutch rock bands of the last decade. They were a tough but inspirational band, a whispered secret that nevertheless enjoyed huge reach and respect outside of their “underground” image. A band, moreover, who could summon up an elemental fire on stage. I don’t think it would be going too far to state that the late Corno Zwetsloot – for long an outspoken ally, friend or mentor of nearly everyone in this scene right up until his death – was one of the driving forces behind the recent renaissance in alternative Dutch guitar music. Now a phoenix of sorts has risen from Space Siren’s ashes; HOWRAH. The ‘Siren’s rhythm section – Ineke and Aico are back in harness with Corno’s old partner in crime, Zoppo’s Kees Apeldoorn. Guitarist Gijs Loots (of a thousand feisty Amsterdam punk acts) completes what, on paper, looks a pretty formidable quartet.

This record funnily enough, (or maybe appropriately enough, outside of the first few seconds of its running time), sounds nothing like Space Siren. The colourful slabs of noise and dramatic lyricism have been mostly retired in favour of a more streamlined, wiry sound, that nevertheless has enough fibre in it to keep the listener involved. Rather, those who liked the Dutch scene of the nineties and very early noughties (and here I’m thinking of the music brought out on Transformed Dreams label, Zoppo, Seesaw, etc) are in for a treat. Self-Serving Strategies sounds very much like an echo of the old “can-do” Dutch underground spirit that at one time looked to the likes of Mudhoney, Pavement and Sonic Youth for its inspiration. Yet there are no monstrously obvious nods to the past or any perfunctory noodlings from these scene vets. Like Hallo Venray’s recent releases, Self-Serving Strategies is a record that is inquisitive, honest and charming, and served up with a certain fizz. Guitar lines are trim and to the point, and the major-minor chord changes have a snap that stops anything getting bogged down. For its part the rhythm section gallops through the set with a verve and grace. In short it’s an intelligent record, extremely well-played and never self-regarding.

Coming out of Voorhout’s Next to Jaap’s studios (Corno’s old lair), Self-Serving Strategies would, in any case, not be a record for show offs, or any peacockery. Those looking for the bright-eyed, bushy tailed pop fizz of the current crop of young Dutch bands should look elsewhere. And those encountering the record after seeing the band live over the last year or so should settle back and let this more considered, less noisy, more reflective version of the band to manifest itself fully. For one, we are served up something rarer than a plate of hen’s teeth these days, namely, an opening track (‘This Chemistry’) that holds the vocals back for a good two minutes which, after a brief spurt of activity, slowly splutters in the wick, like an ending on Daydream Nation. Then there are the vocals. With his voice low in the mix, seemingly moping behind a batch of minor chords, Kees Appeldoorn’s quiet, often dogged worldview takes some time to latch onto. But when the connections are made and the vocals get a chance to stake their claim, the overall effect can be very moving, as heard on last track, ‘Lost Like You’, which has the same melancholy and low key grandeur as that served up on side one of New Order’s Brotherhood. We can also point to the patient story served up on ‘More Than Meets the Eye’, which sounds like a polished, “rock” take on one of Josef K’s spikier numbers (yes, it’s probably just me).

If one was to proffer up a criticism of the record it’s that it now and again the set feels like a set of busy digressions in the same key and as such the listener loses some focus amidships. And I’m not sure what the purpose of the short maudlin instrumental ‘Biased Ears’ – a mini-me of the following track, ‘Step Up Your Game’ – is. Luckily, some of the best tracks are saved for the end of the record. ‘Step Up Your Game’ eventually executes a brilliant reprieve round a major chord riff that gives Apeldoorn’s romantic side some space to breathe. The aforementioned closer ‘Lost Like You’ is a belter too, possibly the best track on the record. And Dots and ‘Our Cool’ blossom out into great mid-paced, clanging, chiming guitar anthems.

So there you go. A great first release and hopefully just a pointer for greater things to come.