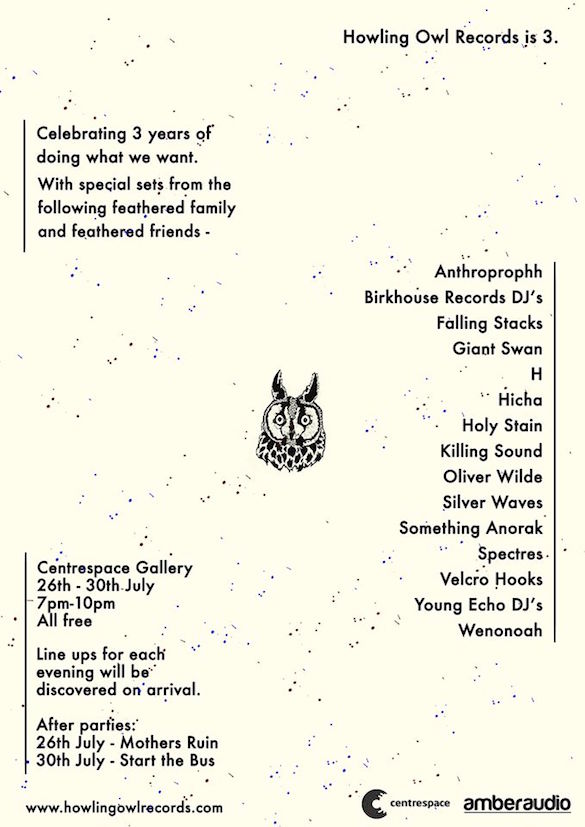 It feels like Bristol’s Howling Owl record label has been around forever, but it turns out this isn’t the case. In fact, they’ve only been around three years, and upon realising this fact they decided to have a party to which they’d invite many of their favourite bands and artists. They’ve also invited us, fans of the label, to come join them, gratis. Said party is this weekend and frankly you’d be a fool to miss it. Full details after the break.

It’s hard to believe that a label who’ve put out quite so much music, and good music at that, have only been around for three years. But such, it seems, is the case. Their first few releases were all by Bristol based guitar noiseniks, bands like Spectres, Naturals, Towns, Falling Stacks and Lets Kill Janice. Since those early days the releases have kept coming at quite a pace with virtually not a duff one amongst them. The label itself has, in turn, grown from being a niche label to being a buzzword for some of the most reliable new British guitar music on the early 2010s.

The label’s first long player was by the artist who has probably been their biggest success so far, one Oliver Wilde. Now two albums in Oliver Wilde’s rich and kaleidoscopic sounds have earned him no end of praise and it doesn’t surprise in the least that he’s becoming a darling of 6 music having recently earned the dubious honour of being playlisted by them.

Anyway – the label are putting on a bunch of free shows to celebrate their third birthday, all at Centrespace Gallery in their home town, Bristol. In their own words:

“A few weeks ago it came to our attention that we had somehow been pursuing this weird little hobby for almost three years. We aren’t exactly the most sentimental of beings (we mostly hate everyone and everything) but we did think that this may be a good opportunity for us to do something fun and nice.”

“Centrespace Gallery have kindly allowed us to hire their fantastic town centre gallery space for a week, within which we will be hosting four gigs, featuring the scarily great line up you can see up there on that there poster. We will be trying to keep the line up for each night a secret, so in theory each show shall be half a surprise. In theory.”

The shows will be taking place this weekend, July 26 – July 30, and feature the following list of artists:

The Facebook event page is here. Apart from the fact that Spectres themselves (founder members of Howling Owl) are playing Saturday they’re keeping who’s playing when on the down low. So basically you’re encouraged to go along to every show.

In other “Howling Owl is 3” news they’ve also put together a fantastic collectors item of a newspaper / download package. It’s billed as a “full colour celebration of noise, art, sweat and feathers” and it includes…

“…a full colour newsprint retrospective of the last 3 years, featuring photos / stuff from the bands / art / things that have happened / complaints and more! It will also come accompanied by our ENTIRE back catalogue on download. So you can grab anything you missed, or haven’t got yet. Or maybe you’re new to the label, in which case this will fill your boots.”

And all for a mere £6. Pick it up from their Big Cartel.

~
All words by Guy Manchester. More writing by Guy on Louder Than War can be found at his author’s archive. He can also be found on twitter as @guid0man.