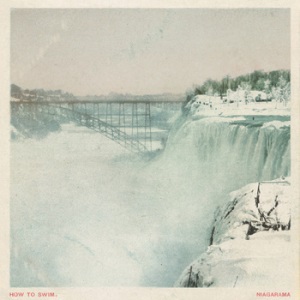 The best thing often seem to come along when you least expect them. The cover art to How To Swim’s new album, Niagarama isn’t particularly eye-catching, but it somehow drags you into the crashing waves of Niagara, the opener to a quite exciting album. Harry Houdini may well be proud as our hosts tumble down the Falls in a barrel lamenting the sale of their business and wondering if they are really doing the right thing by rolling themselves downwards. That’s only the start of a marvellous collection of eleven entertaining tracks.

Gregor Barclay heads the group. A Scottish BAFTA winning writer and composer known mainly for his orchestral work, he has a keen ear for what works well and the songs here are incredibly well arranged and performed.

After the slow start we’re into rockers Small Parts Moving and Bacterium with the later introducing us to a lively horn section which features intermittently through the album. Huge choruses and dramatic performances rouse the ears and keep them attentive.

Too Old For A Crush (To Be Endearing) is a semi-militarian sounding song which seems to be marching along quite undisturbed until an enormous cacophony of instrumentation interrupts and then subsides. Gregor’s voice contains a modicum of grit and gravel, executing notes and enunciating superbly. There are feels of several musical genres – (Northern) Soul, blues, pop and rock – which when expertly intertwined, work when maybe they shouldn’t. Tracks like It Doesn’t Have To Be You are wonderful to say the least and could well be one of the songs of the season.

I Need A War and Long Division give us a pop funk feel again with delightful instrumental breaks and elevating brass interludes. Closer All That We Wait For is pure pop genius, anthemic and compelling, a perfect cigarette-lighter-waving end to a very accomplished album.

Niagarama could well be one of the highlights of the year.