Home Blogs How to survive an apocalypse in….Bradford 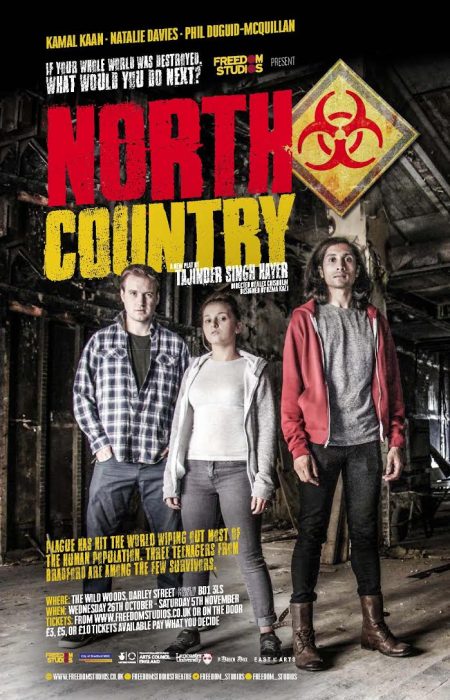 Freedom Studios are famous for creating site specific works in offbeat places like a derelict cotton mill or a major bus terminus so it’s not such a shock that their latest post-apocalyptic play is being staged in a disused Marks and Spencer building deep in the heart of Bradford.

Tajinder Singh-Hayer created his new play North Country using his hometown as a platform to explore how a new society might develop after a calamity wipes out most of humankind.

“North Country is a bit of post-apocalyptic theatre following three characters from different backgrounds – Nusrat, Harvinder and Alleyne – over the course of nearly 40 years in the wake of a devastating plague outbreak that has killed off 99% of the world’s population,” says Tajinder.

“It’s about the three of them surviving in the aftermath of that in Bradford, but also building a community, and deciding what type of society they want to build.”

North Country has had a long gestation period and as the world has changed so did Singh-Hayer’s words.

“I began writing the play in 2012 so when I started it was a recession play as we were dealing with the aftermath of 2008 and that whole sense of the political atmosphere having shifted in a huge amount, and the worry of living in a time of scarcity, which is what often happens in the post-apocalyptic genre.

“I grew up Bradford so we had struggled to recover from the last big depressions of the 1970s and 1980s. Walking round Bradford you’d see closed factories with trees growing out of them that looked post-apocalyptic.

“What has happened in the last year is Brexit has ramped things up to the next level of post everything, and the post-apocalyptic genre can lend itself to interesting explorations of personal, local, regional, national and cultural identity because you have a point where you have an old country, then something apocalyptic happens, and you a have new country.”

That post-Brexit world seemed to have inadvertently sparked off a damaging collective national crisis as we try to work out what it actually means to be British and how will we shape our future relationships with our European neighbours.

“When you are in a new country phase you have you have to ask yourself what is that we now, what are we going to carry on from the past, what are we going to revive from the past and what are gone. For me coming from a British Asian background this notion of old country, new country is absolutely relevant there is a point where language shifts, people move away and that initial migrant identity shifts into something else.

“With Britain Asians the side that is interrogated more often than not is the Asian side, but post-Brexit there is this is thing now we have exited Europe – what are we? What is Britain? That’s a tricky question to answer.”

When this play started out four years ago the world seemed a less scary place but the antics of various demagogues round the globe has created a febrile political climate where an apocalypse is not such a far-fetched idea.

“It’s a bit worrying that with a play I started in 2012 where some of the terrain I was exploring then in terms of in times of scarcity where it is easy to find scapegoats, and some of the things I was writing seemed a bit implausible and it’s not going to happen,” notes Singh-Hayer. “But now we’re post-Brexit where race hate attacks have soared and across the Atlantic we have a presidential candidate openly spewing horrible stuff so it is worrying the play is becoming more topical.”

A recent production at one of the regional powerhouses was undermined by poor science but there shouldn’t be any problems with North Country as Singh-Hayer tried it out on one of the toughest audiences around.

“There is harder SF where the science and plausible thinking is really important, and then science which is going towards magic which is things like Star Wars. You have decide where to place your work, but this is sort of rooted in a world I grew up in and with this genre there is always an element of walking round and thinking what if? I hope this is a plausible explanation of what might happen, but Bradford is a city of half a million people so you could have half a million different stories.”

Singh-Hayer was partly inspired by seeing the massive muddy hole that blighted the centre of Bradford for years as local shoppers waited for a new shopping centre to be built, but ironically now the hole has been filled it has had an impact on the town’s traditional shopping streets.

“It’s taking place in the old Marks and Spencer building on Darley Street and it’s a bit odd as I remember going there to buy my school socks there when I was a kid.

“One of the reasons I wrote this play about trying to survive in time in a time of scarcity is that it is important that the audience have a space to come together to meet their fellow citizens in a non-traditional theatre space.”

North Country is at the Wild Woods pop up theatre on Darley Street from Wednesday 26 October to Saturday 5 November. To book tickets go to www.freedomstudios.co.uk