Home Blogs How To (Still) Survive As A Small Venue – Joint Review Of... 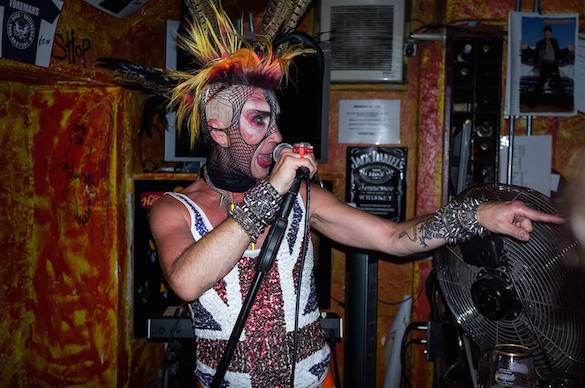 Its been over a year now since I wrote an article called “How to Survive as A Small Venue,” detailing the pleasant surprise of how the tiny punk rock bar Foremans in Nottingham had transformed from a watering-hole into a live venue with hugely successful results. Now, 15 months on from that article, within the space of a week I could not have been proved more right, as two consecutive Sundays have seen two very, very different gig showing the broadening scope of the venue.

On Sunday, former Adverts frontman TV Smith returned to Foremans after a triumphant set last May. When I first interviewed him last year, he was enthusiastic about the DIY nature of this intimate venue and nothing has changed. Smith lends himself to the intimacy of the venue; conversational and warm, but above all impressive of voice. Acoustic sets can be unforgiving on vocal and musical flaws and Smith is note-perfect. Last years set was heavy with Adverts songs – this set contains more new material (alongside Adverts classics), and he has lost none of the sharp social comment which has always made him a memorable figure, reflecting on national poverty, the politics of misery (reminding us in between-song conversation that going out and enjoying ourselves with people we like is a kind of revolution in itself) and the temptation to vote for the first political party to promise something slightly different – a stark warning, perhaps, to the unsettling rise of UKIP. At the end of the set, Smith says how much he would love to return for a third time next year. And, with acoustic punk being the perfect fit for Foremans, we would be very happy to have him. 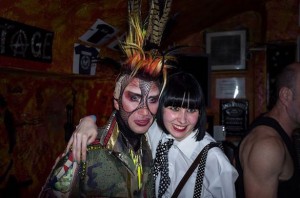 However, just a week before, Foremans had done something completely different, showing there’s more to them than acoustic punk rock, by embracing a live electronic set from Sigue Sigue Sputnik’s Martin Degville. Electro works better in Nottingham’s smallest venue than anyone could have dreamt, the sound travelling around the room as if its what it was designed for. This stripped down version of SSS comprising Degville and his partner Johann Weidemann doesn’t even sound stripped down; it comes across fully formed from the minute they open with an attention grabbing “Rockit Miss USA.”  Degville himself is an utter showman, his glammed-up, high camp theatre unlike anything ever seen in Foremans before. Things hit a special kind of surrealism with the sparkliest version of “I Fought  The Law” imaginable, at which point a (male) friend taps me on the shoulder and says “Amy, when you write your piece, point out how many burly bearded men were swooning over him!” Potential sexual conversions aside, it’s a valid point – Degville has won over the crowd, and its great to hear a slab of glamorous synth-pop in the venue. I can now really stand by my original statement that what I appreciate about Foremans is that its not so much a “punk rock pub,” as a music lovers pub.

In the space of a fortnight, then , that small venue I first wrote about over a year ago has fully fulfilled that original article, reaffirming in the space of a week not only what it we already knew it does very well, but also that when it does something different, it really pulls it off.

With thanks to Jason Whittle, Martin Degville and TV Smith.

~
TV Smith can be found online at his website: tvsmith.com, on Facebookand he tweets as @tvsmithmy.

All words by Amy Briton. More from Amy can be found at her Louder Than War author archive.