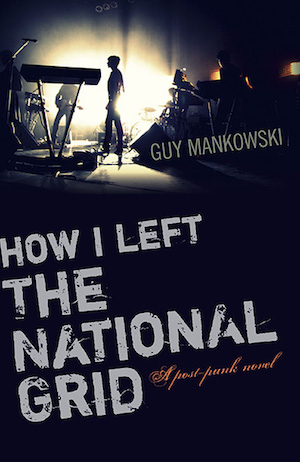 How I Left The National Grid (Roundfire Books)

‘How I Left The National Grid’ tells how a journalist goes in search of an enigmatic band frontman of a Manchester band from the eighties. For Louder Than War, Damon Fairclough reviews the book.

Pop music was made to be forgotten. That, at least, was the jibe from mums and dads and magistrates of the 1950s; they may have tapped their feet to Pat Boone but they shook their heads at Rock Around the Clock riots and assured themselves that the fad would quickly fade. With the help of National Service and a dose of short back and sides, the throwaway cultural form would be swept aside along with chip papers and dog ends. Those who had been seduced by its wanton beat would soon revert to wholesome activities like pipe smoking and pilfering birds’ eggs.

But it turned out that people didn’t want to forget. Even as the nascent pop industry searched relentlessly for the Next Big Thing, and yesterday’s music vanished from view – no back catalogues, no reissue labels – the memory of sweet bygone days refused to die. And because those days were soundtracked by the sound of Now! – which rapidly became the sound of Then! – pop music’s journey from progressive modernity to endless sonic recycling was set in motion. Pop would soon no longer be throwaway; it would be part of our cultural canon. And rather than being forgotten, its artefacts would be destined to keep BBC Four in Friday-night filler for years to come.

And though music journalists of the inky era found that the digital world had it in for them, many discovered that there was a future in the past. After all, as the music section at Waterstones attests, fans don’t just want to remember; they want to learn more than they ever knew, and thus there’s always room for one more tome on the topic of The Doors, or Dylan, or Dumpy’s Rusty Nuts…

This brings us to Sam Forbes, the fictional journalist at the heart of Guy Mankowski’s novel How I Left The National Grid. The plot throws Forbes into a mission to track down one of the most enigmatic frontmen of the eighties – the tormented Robert Wardner of Manchester band The National Grid, who apparently led his group from Top of the Pops to global success before vanishing from the face of the earth. Forbes’s intention? To write a book about the search, naturally.

How I Left The National Grid spins two intertwined yarns: we follow Sam Forbes’s fortunes as he picks up his publishing deal and sets out on his adventure, all while attempting to manage a relationship that seems vulnerable to his wanderings through the past. We also experience The National Grid’s rise via Robert Wardner’s own inner narrative, beginning with their champing-at-the-bit Top of the Pops appearance in 1981 (which includes some hilarious Iglesias baiting) through to disaffection and disappearance… and beyond. If there’s a third key character, it’s the band as a collective entity; Mankowski’s descriptions of gigs and recording sessions hint at the way a group becomes an organism with its own needs and desires – urges that spring from, but exist independently of, the individual musicians. The band is the means of expression of a sound, and once that sound takes on a life of its own, the band members must run with it or fall by the wayside. 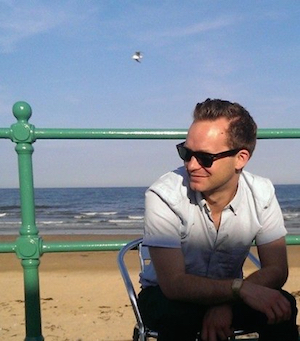 Ah yes, the sound. The deployment of fictional music within the pages of a novel always prompts a tantalising question: if we could hear this band, what would they sound like? We might well hear them in our heads, but in the absence of any real-world soundtrack to accompany the book’s publication, we have to assume that our own interpretation remains personal and not necessarily what Mankowski had in mind.

To my mind’s ear, The National Grid sound something like Bauhaus with drones, and as I really did see that group at the Sheffield Lyceum in 1982 – fitting the novel’s timeline and The National Grid’s fictional trajectory – I found I was reading the novel through a phantom cloud of Insette hair spray, hearing the music through remembered arcs of darkly gothic feedback. Via these means, I was able to bring the magic of memory to bear on The National Grid’s journey through the eighties, creating some vivid mental gig-scapes of my own.

A little disappointingly, however, the band’s Manchester years as documented here are light on the atmospheres of the city, with generic nods to Thatcher and recession in place of more authentic renderings of its Arndales and precincts, its damp and its prematurely ageing 1960s’ dream. More convincing is Wardner’s flight to London: having found that the band’s recipe for success comes with a side order of relentless torment and pain, he ditches his career and heads to the capital, all the better to vanish into the crowd. As he steps off the train and pauses for kiosk coffee while perched on a bollard, the shock of the city – which did and does seem a universe apart when you visit from the north – rings true. It’s thrilling: hectic and surging, it’s full of money and potential, free from the spectres of his past. And as well as money, there’s a new kind of Thatcherite cast-off: “Outside the sombre café a bearded bloke in a hunting cap lingered by a bin.” That’s such a mid-80s London observation; up north, the homeless didn’t yet exist quite so brazenly, so prophetically.

Thus begins Robert Wardner’s quest to be forgotten… though as we have established, pop music doesn’t work like that. Disappearance creates ever greater mystery, and though Sam Forbes battles with his own internal sense that pasts may be better staying buried – not least for the sake of his own physical safety, which appears threatened as a result of his investigations – he retains the mind of a journalist, the scribe who gave The National Grid their early exposure in Melody Maker. It was long believed that Wardner was dead; there are even rumours that he may be a murderer. But although Forbes has doubts about the way ahead, he remains compelled to action: it’s about excavating the truth, delivering a book, and maybe reliving past glories on the way – not least when young publishing assistants who love The National Grid’s now-retro sound start giving him more than the time of day…

Revealing whether or not Forbes finds Wardner would taint the tale somewhat, but in any case, that isn’t really the point. It seems to me that this intriguing novel is more about the pop fan’s urge to remember, to hold on to the magic of lost soundtracks and the moments to which they’re attached. From middle-aged Take That lovers queuing up for Robbie’s return, to the Fall fans who snapped up bass player Steve Hanley’s autobiography a full 16 years after he left the band, Guy Mankowski reminds us that for a music that was supposed to exist just one radio play away from the dustbin, pop doesn’t half have a habit of hanging round.

How I Left The National Grid is published on 28 February 2015. It is available to preview and pre-order on Amazon.

How I Left The National Grid will be launched at The Cluny, Newcastle on 28 February 2015, at a night of post-punk literature, music and comedy featuring Kingsley Hall And The Murder, Retriever and Hausfrau. More info can be found at The Cluny’s website.

All words by Damon Fairclough. This is Damon’s first article for Louder Than War but you can find more of his writing on his website, noiseheatpower.com, and can follow him on Twitter at @noiseheatpower.