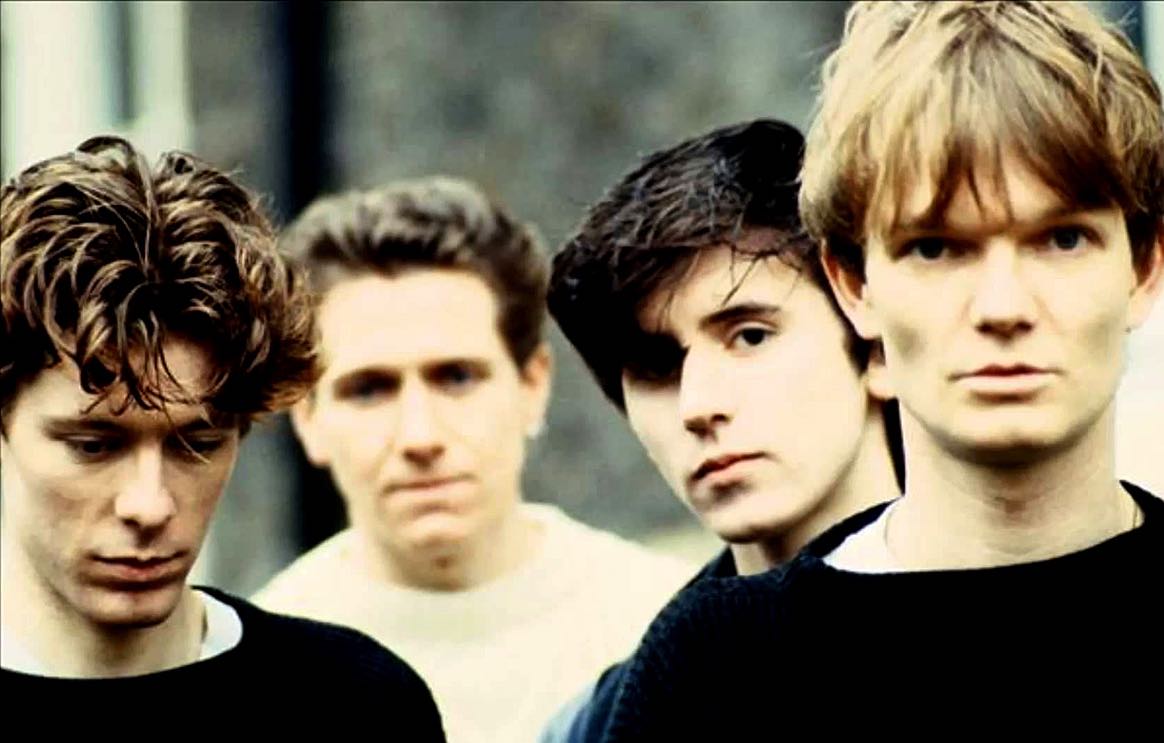 One of Alan McGee’s earliest signings to the seismic Creation Records was The House of Love – during those heady days of acid house when music experienced a major shift and surge in sonic sea change.  They are the band, formed by Guy Chadwick and Terry Bickers, who brought a delicate ferocious intimacy to guitar music although they closed shop in 1993.  It is no wonder then that Manchester’s Albert Hall is packed full tonight by anyone who knows anything about real music and what better venue for a band that treat sound as high art.

It’s also the band that woke a 19 year old introvert and pushed her out of herself into a sensual awakening and my first review with ‘The Girl With the Loneliest Eyes’ and ‘Someone’s Got To Love You.’ A student pal had recommended the band to me saying I would really get them. I had missed the rhapsodies over their debut ‘Christine’, the early John Peel sessions but bands do save lives. Just that one song was enough to divert me from a suicidal mission in a grey northern town and prompted me to write a letter of thanks to the band. Impossibly, I got one back (albeit typed!) from ‘the band’ thanking me for my encouragement and wishing me a speedy recovery.  Back then, that was rare (well, it was to me) and only cemented my love for this weird band that could carve surreal worlds and passions into music that calmed you.

The band barely survived the LSD-drenched recording sessions of their second eponymous album though and were too ‘out there’ for 1990’s populace so they disappeared into radio silence for a decade or so.  I wasn’t the only one thrilled to hear about their regrouping and new work a few years back.

But Guy (older than Terry by ten years) must now be over 60 so this live performance is precious.  Supported by a DJ set by Alan McGee, Creation’s founder, and the resurrected ‘Thousand Yard Stare’, a guitar band that started in 1989 before disappearing into orchards and farming (was this a circulated memo for all Britpop bands?) this night is very much an ode to an era we cannot replace.  Lead singer Stephen Barnes tells the audience: ‘We did make two studio albums – the last one sold 137 copies. Did anyone buy one?’ There are lots of cheers . ‘You’re all fucking liars!’ he declares before, ‘Maybe not. Maybe all our fans were in Manchester.’ Their set is full of lush guitars appreciated more now than they were in the 1990’s when they supported James and Carter.  At the end of the set, they announce the House of Love’s imminent arrival: ‘Get ready for the House of Love – one of our national treasures!’ And indeed they are.

Terry Bickers comes on stage to check his pedal board and tune his guitar precisely although there are technicians fiddling about with the set up too.  It is telling about how important the exact sound is for these guys. Finally, the backbone of the original band, Guy and Terry, arrive: Guy, now silver-haired and in his early sixties but still wearing the same expression of wonder and Terry, lean of limb, still with the obligatory 90’s bob, although less black, more charcoal. Both look as if time has not halted the charge of creativity that ripped through them. The crashing chords of ‘Christine’ roar in, as it did three decades ago, a full frontal psychedelic tsunami of sound and harmonies followed by an ecstatic cheer of recognition. Because they are indeed ‘still talking to me, still walking with me’ and the whole world cannot drag us down tonight. These guys are masters in creating sonics from strings and sound systems that just roll over you.

Songs from their earliest years (now re-released in physical format through Cherry Red Records on an immense 5 disc compilation) pull soul out of discord, a melody out of dissonant chords and a gut-fuelled ‘Yeaaaahhh!’ repeatedly from behind me. The toms butt in and lead-guitarist Terry races across the stage like an animated jack-knife bewitching sounds and screams from his guitar while Guy’s melancholic tones ravish them.  ‘House of Love’ go beyond the reverb of ‘My Bloody Valentine’ and actually craft structures out of sound, pictures and dreamscapes from universal emotions. The packed crowd of 30-70 year olds are roaring with wonder as the acoustics in this musical cathedral enthrall them. The spectacle is indeed the sound here for the band that understand it as both an art and science. Throbbing lead guitars, numerous chord sequences that bleed and merge with harmonies create an ambience of the colourful moviescape that is ‘House of Love’.

The start of the set features songs from the Fontana and Creation years with little from ‘Babe Rainbow’ or the second album. I thought I knew all their songs; I have every album yet these are ones I am unfamiliar with yet enjoy. Howls and eery sounds from guitars sound simultaneously familiar and foreign as alien mouthorgans, pulling angels, demons, ghosts and everything in between out of strings.

‘Killed by your innocence’ – a song that sends through a wall of sound that bursts through the soles of my feet, up my thighs, up my backbone. And from the gasps, I wasn’t the only one. That was amazing.  ‘Se Dest’ follows and ‘Deep Blue Eyes’ – circular pools of harmony and riffs that whirl rather than repeat, easing us into deeper waters: the ecstacies of guitars talking, bringing an intimate sensuality of sound rock doesn’t usually achieve.  ‘Feel me’, ‘Touch me’ (the song) and they do. The laconic Guy admits: ‘Thank you, Manchester. Thank you very much.  Ok…’ and Terry gets his slide on but this is a slide guitar with a difference. It actually talks. ‘Love just falls down my house’.  When Guy announces: ‘We’re going to play some songs we don’t play very often for various reasons,’ I finally get it.  I stop feeling frustrated about not knowing the song titles and start enjoying this cosmic experience.

‘I think you should know you started a riot’.  I think they should – and so do the rioters with their wolf-whistles. Those slow chords, that echo, the shimmer, the half-promise of something yet unformed but of immense potential: ‘Hannah’.  The crashing tremors and rhythms cascade over each other, rolling over the deep drums throughout.  This can only be followed by ‘The Beatles and the Stones’. But for me, it was the House of Love, not those previous bands, that ‘made it good to be alone’ and ‘sucked the marrow out of bone.’

The intimacy continues with Guy announcing: ‘This is a weird song’ like we would expect anything else.  But then we return to more familiar territory after that.  ‘We made two versions of this one. This is the first one.’ It’s ‘I’m The One’ – a harder, thumping wild howl version with the iconic lines: ‘I came a cropper when I trusted in you.’ Terry’s guitar images scream over Guy’s gravelly low tones. This is followed by a darker track with the line ‘something good in everyone’ and then the poetic sad ‘Blind’. Terry finally speaks:  ‘The next song was inspired by Tina Turner’.  With a stripped down, bare intro verse before it commits to the full one force and rage of the volcanic ‘I Don’t Know Why I Love You’.  Everything about its execution is perfect from the harmonies, the guitar bridge and Guy’s random ‘Wah wah wah!’ introducing it. Terry continues flicking like a frenetic blade across the stage, doubling up and springing back and forth like a 17 year old and the chemistry they create fills this dome.  The mood is swiftly shifted to the slower ‘Safe’.

Guy declares: ‘Hi. You’ve been fantastic. We’ve had an absolute gas and thanks so much for coming.’  The huge ‘Destroy The Heart’ closes the set although they have to return for a demanded encore.  The encore feels like The Shadows on acid : ‘looking for affection, trying to find God’.  Guy’s self-consciousness peers in again:  ‘A bit pathetic this song and needs total silence.’ It’s given and it’s not pathetic.   But Albert Hall does beg for not only the rapture of ‘Shine On’ which concludes the show but the skeletal melodies of ‘Someone’s Got To Love You’ and ‘Loneliness is a Gun’, the dark and beautiful honesty of ‘Audience with the Mind’. These guys wrote and created soundscapes about paranoia, loneliness, lust, longing and love like surgeons – long, long before they were buzzwords and obligatory ‘content’.

For me, they are my first musical awakening and I don’t think I’m alone in that.  The real surprise was that they can still bring out  wonder as if they’re still discovering it.

You can find The House of Love on Facebook.

This is Nina’s first review for Louder Than War.