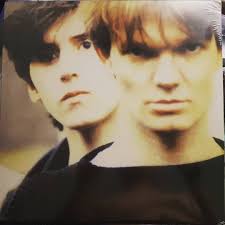 Deluxe reissue of the House Of Love’s classic debut album, set in a hardback case with five discs presenting the original album, singles, demos, BBC session and live recordings. Ian Canty listens in and reflects on the stormy relationships behind the music.

After the Jesus And Mary Chain flew the coop to WEA after just the one single, Creation’s great hopes for the late Eighties were the House Of Love. Being a more orthodox structure than the chaotic smash and grab of the Reid brothers (though a JAMC gig at the Electric Ballroom played a pivotal role in band leader Guy Chadwick working out what he wanted to do in music), they made big waves with their first single Shine On and this debut album. Looking back now you could say the LP was the last stand of old-style Indie, as Acid House was around the corner which would change things immensely. For the time being though, everything looked very bright for the House Of Love, despite the internal band dynamics that were already causing ructions.

The band were split down age lines, with the older singer and guitarist Guy Chadwick and drummer Pete Evans joined by the almost ten years younger Terry Bickers on lead guitar. Andrea Heukamp on rhythm and vocals plus bass player Chris Groothuizen completed the initial line up. Later on, Chadwick and Bickers, the leading creative members, would clash and this would ultimately lead to a split, but for now all looked good and they made their debut with a classy calling card in the Shine On single. Press was highly favourable to this record and with it the band shot up the Indie charts.

More in the classic post-punk mode of say Echo And The Bunnymen than most of their contemporaries, the single was a big success and the hint of intrigue that swirled around the band captivated many. Another single followed in Real Animal and if things were not quite at fever pitch awaiting their first album, a lot of folk were pretty darn excited. In the interim Heukamp had left, which was a shame, but she would return to contribute to the band in future recordings.

The frosty pop jewel Christine, the first song Chadwick wrote for the band and released as a single at the same time as the LP, kicked things off in some style. The high standard set by this effort was maintained throughout, a lot of good tunes allied to committed playing keeping things going nicely, with Chadwick’s lyrical obsessions to the fore (religion seems to rear its head quite a bit). Psychodramas like Road and Happy (lovely Sixties psych brio to this) lie alongside more introspective pieces like Sulphur and Fisherman’s Blues, but everything has a lightness of touch, fresh as a bright winter morning and replete with great guitar work. It feels like a whole piece of work that hangs together very well even today. That it was the imminent split with Bickers that would kill their momentum doesn’t matter – The House Of Love shines on.

I can’t imagine that many of the potential purchasers of this box will do so purely because of the debut album itself, but safe to say it still remains pretty blooming good and their best statement. In addition to the LP itself, on this disc we get the two demos of Christine and Shine On that originally came as a 7- inch single with the LP as extras, all of which adds up to a concise summary of the band’s strengths.

Moving on and ratcheting things up from the 3CD edition of a few years back, we have four extra discs to explore. Disc two highlights singles and rarities and disc three demos. Compared to the 3CD release, some songs have changed places on the singles and demos discs and there are a few different tracks added. In addition we have two extra platters which mop up the band’s BBC Sessions and various live recordings across their early years (also the live tracks that were on the 3CD find their home logically on the live disc). Obviously, given the timescale that this box set zeroes in on, the songs repeat a fair bit so you need to be a fan to get the best out of this collection.

Disc two starts out with the single version of Shine On, the romance and mystery of the song a key element in establishing the House Of Love as a force to be reckoned with. The disc also ends with a really good acoustic version of the same tune, one that was originally issued on a flexi. But in between we get plenty more to enjoy including the great Destroy The Heart single, which followed hard on the heels of the LP before the Fontana deal was inked. Early on we get glimpses of what a different band the House Of Love could have been had Andrea remained. The Hill and Welt are great examples of what might have been. Bickers supplied some fire on B-side Flow and Blind has a nice feel with some good percussion. Of the alternative takes, the echo-laden jangle of the demo of Real Animal pleases, with Happy being a mite tougher than the album version for my money.

We are in demos and rehearsals country on disc 3 here. The audio clarity is pretty good though: the House Of Love almost always sounded pristine. I liked the R&B clatter of the early mix of Happy and the chiming Hold On Me. We get to hear lots of Andrea’s voice on Shine On (band demo) which really enhances it. The Modern World, actually a demo version of Welt, is in a nice “busking” style guise and Little Girl (aka Mr Jo) builds into a speedy stunner after a meandering intro. To close, we get three rehearsal recordings where the sound quality drops a little; not much really though. There’s less vocals to Shine On which makes it feel a bit half-done, but Destroy The Heart sans guitar actually flows pretty well. This disc is an interesting delve into a band working towards the LP proper.

The BBC Sessions disc is one of the key hooks here for fans. There are three separate sessions of tracks recorded for the John Peel show at around the time of the album (88/89) and some feature material previewing a few tracks that eventually came out on their first LP for Fontana as well as some different takes of songs on the album and singles. Four songs taped in June 1988 as the debut album was being released start this section of the boxset. Here the House Of Love elect not to rehash anything on that record, instead a zippy version of upcoming single Destroy The Heart and the glistening guitars and Smiths-style melancholy of Blind steal the show.

Three months later and they were back on the Peel Show, the slow build-up on the new version of album track Love In A Car and rarer item in the languid Don’t Turn Blue (aka Soft As Fire) being highlights. The final “acoustic” session finds the band looking ahead, with the first two tracks In A Room and The Beatles And The Stones destined for their first Fontana opus. The sparse setting for Christine works well and the solo Chadwick rendering of Loneliness Is A Gun brings the curtain down on this disc.

The final set of contemporary live recordings also has plenty of interest. Starting with a four-song blast from Utrecht, the sound is pretty good and the band builds up quite a head of steam, culminating in a speedy take of Shine On. The crowd noise is a little more reserved on the five songs from Groningen, we get a rare song in I Don’t Know Why I Love You But I Do, quite different than the future Fontana hit single of a very similar name. For the following selection we are back in the UK at Brighton, a very slight drop-off sonically, but more than good enough for release. An early go at Never which was on the next LP starts things off with pounding drums and the slow burning but eventually explosive Se Dest is for me the pick of this lot.

We’re back over the Channel for the final set of five songs from Paris which closes off this disc, which seems to be taken from a French radio recording. Lots of crowd noise and en francais stage announcements from Chadwick. A storming version of Destroy The Heart and the Stooges’ I Wanna Be Your Dog ends things on a messy but fun note.

The House Of Love certainly stood at the apex of UK Independent music with the advent of this album. It is a shame that they never really capitalised on this success, though they did score some hits with Fontana, the fact that Shine On was their biggest underlines how they never really escaped from the shadow of their early glory. With this new edition I would have thought there is everything here a HOL fan could wish for, with the demos, rarities and BBC stuff giving an alternative view of the band and exploring avenues not really pursued by the band on their official recordings. This collection includes a very thorough history of the band in an extensive and illuminating sleeve note by Neil Taylor, with contributions from band members. All things considered, a handsome presentation – and a damn good listen too.