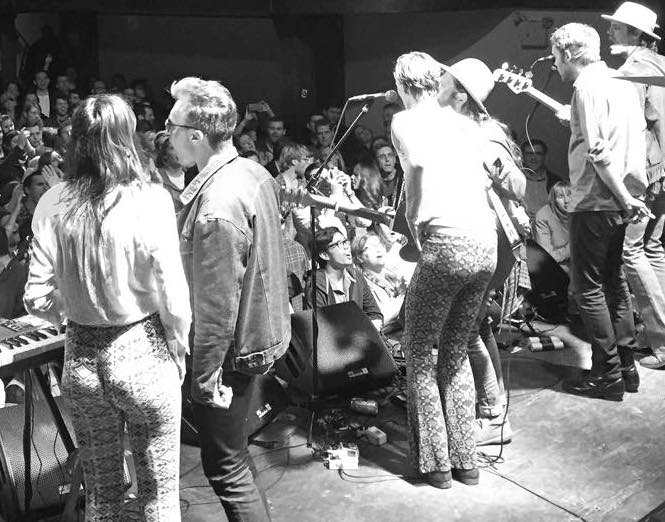 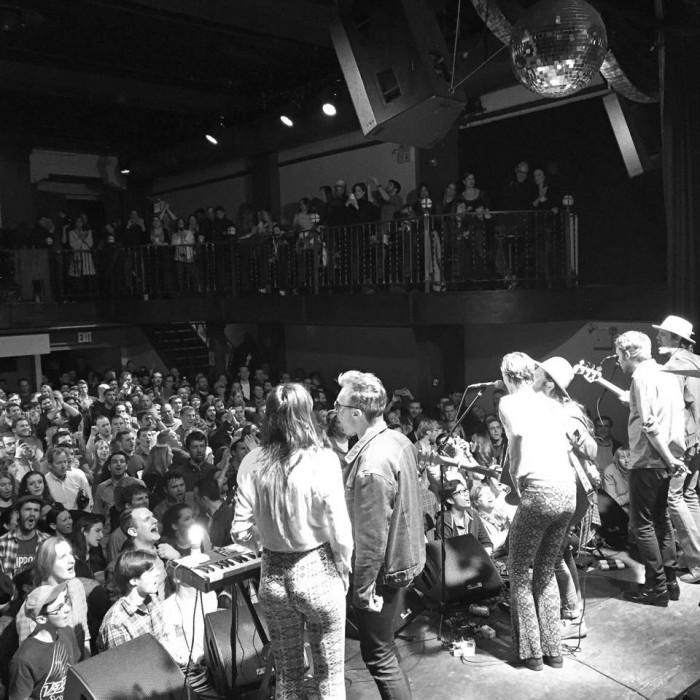 You’re going to hear a lot more about Rough Trade signed folk rock four-piece Houndmouth before the year’s out, starting with this review of last week’s packed Bowery Ballroom show.

Straight outta Letterman and a sold out gig at Rough Trade and into a sold out New York show for rising stars of the Americana scene meant good vibes, sing-a-longs and lasting memories.

Thanks to some great press with some commentators saying Houndmouth are on the cusp of great things, the crowd is a very healthy one; and a very good looking one – a good mix of men and women who could be off the pages of a festival chic catalogue. This combines with the brilliant music to whisk you off away from an intimate New York venue and to some faraway festival (not to team End of the Road, if you’re reading this though, you need to book these guys.)

The Indiana troupe has an undeniable energy and they make good use of male lead vocals and female harmonies and punchy, catchy guitar hooks to bring their lyrics to life. “Got me a postcard and a 20 dollar bill,” they muse during ‘Houston Train’, “Told you I’d meet you in Memphis if you bring me those pills. And I got high and I got dry for far too long. And the gypsy train to Houston is gonna take me along.”

Their stories conjure up images of life on the road. Romantic Beatnik vibes. The way they turn a gig into a party is inspired – the music has soul and this soul is hinged in great tales. Like Edward Sharpe and the Magnetic Zeros they take you on this journey with them, making you feel part of the show, rather than mere bystanders – a rare skill.

Like their peers Grouplove, the solidarity in this group shines through with accidentally in sync moves and lots of smiles and hugs. The storytelling element of their songs is up there with the likes of The Felice Brothers and they employ a lot of similar terminology – especially during songs such as ‘Penitentiary’ and ‘Gasoline’.

This tour is promoting the new album, ‘Little Neon Limelight’, and the material from that slots perfectly into the set. ‘Sedona’ is a highlight, a more traditional sounding song akin to the US folk stars of years gone by, of The Band – which they dub as one of their key influences. It’s evident this influence base is wide and rich and this really helps shape their music.

They end on a cover, a Dion cover – Runaround Sue – to rapturous applause and they leave one very happy crowd.

All words by Laura Williams. You can read more of Laura’s writing on Louder Than War at her author’s archive.