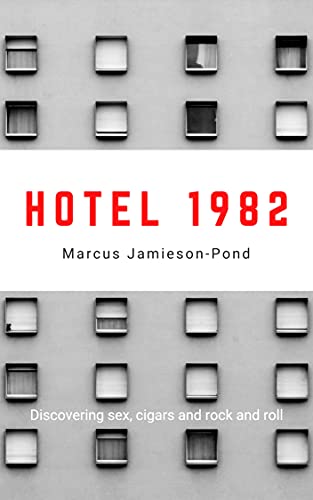 Hotel 1982 is the memoir of Marcus Jamieson Pond, stretching over a formative couple of years of his life, from the fag end of his school days, where, by the mystical power of underage drinking, he becomes a big, party organising, fish in a tiny corner of South West England, to a blinking, tottering Bambi in the glare of London’s bright lights working in the unlikely trade of mini-bar operative in The Jupiter, a mid-range hotel, utterly out of his depth alongside an endearing cast of eccentric and enterprising chancers.

The first part of the book is the tale of how Marcus came together with his partner in crime Richard, and how they managed to make themselves popular with the classic school firmament of tough boys, geeks and crushes by ineptly organising boozy parties, the drink sometimes procured by blackmailing parents who would also smooth over the resulting carnage, floor damage and bad faith.

This affectionate look back at the last days of secondary school reminded me of Jonathan Coe’s classic “The Rotters Club”, especially the affectionate portrayal of the slightly awkward, no-quite-fully-formed interactions of the adolescent pair with the world around them. However, their chaotic approach to becoming proto-rave entrepreneurs (to a soundtrack of Santana and Fleetwood Mac) does bring them into the “cool kids” of the school, and with that a false sense of their own ability to take on the great wide world, and it is this that sends them headlong into the indifferent arms of the capital for the second part of the story.

Marcus’s oppo in the “Dos Amigos”, Richard had planned to take a year out before university and has made it to the capital where he sends Marcus, in the doldrums having failed his A levels due to not doing any work, a postcard inviting him for what appears to be a weekend in the Big Smoke, that turns into a year.

After growing up in an unnamed corner of the South West of England, neither of the two protagonists are really prepared for the intricacies of multi-cultural, ambisextrous London, and definitely not prepared for the murky life in the margins offered by Richard’s seemingly arbitrary career choice of hotel work.

Marcus finds himself a job as mini-bar stocker, a role that brings him into contact with a diverse cast including two French men (one called Mick, after Irish ancestry), the Maltese manager Ahmet and Andrew, whose classic 1980’s gay clone look Marcus mistakes for extreme Queen fandom. He’s also introduced to the mysterious intricacies of the hotel hierarchy and the simmering resentment between receptionists, bar staff, waiters, housekeepers, and the surprisingly prestigious mini bar operatives. Their elevated coming from the kind of occasionally valuable detritus left by guests and there are scrapes involving misplaced cigars booze and sexual propositions.

On top of the story of the hotel itself, it’s a story of a young man living independently for the first time, from struggling to find affordable digs to eking out his meagre wages across inflated London prices, cooking sausages in front of an electric fire and shopping for clothes whose budget prices reflect the fact that they don’t fit properly (and never get properly washed, he never manages to get to grips with laundry in the year he spends in London), and quite a heartwarming subplot about a landlady of mysterious provenance who is quite clearly looking out for the naïve young lodger and his friends.

In the meantime, he becomes more sophisticated, shedding his shoulder-length hair and Kickers and gradually migrating his musical taste from the dad-rock of his hometown to the likes of Echo and the Bunnymen, Tears For Fears and New Order blasted through an early Walkman, a story arc that ends with him in a far better position to eventually start university in 1983 than he would have done had he passed his exams the first time around.

It’s a charming and well-written book that would make a fine film adaptation, the author has a wonderful way of sitting inside his 18-year-old self throughout the narrative. Being a memoir rather than fiction it misses out on being the salacious expose of the “Un-PC” early 80’s that it promises on the cover, although some parts, such as the terrifying reception in the Irish pub in Willesden Green straight out of Withnail and I, and the visit to his first potential lodgings are tremendously evocative of the era. The huge gulf in attitudes between the early ’80s and the present day is something that could have been expanded on to hilarious effect, and I think the book missed a bit of an open goal in not extrapolating that a bit further.

That’s not to detract from what is an exceptionally good-natured and amusing caper, definitely worth a few hours of your time and will make you think about how those tiny, overpriced bottles in your hotel room got there, who left them there, and the possibly perilous state of their laundry and more importantly, about taking the greatest of care regarding the things you choose to leave behind…

More information and links for buying the book in various formats over at https://www.hotel1982.com/