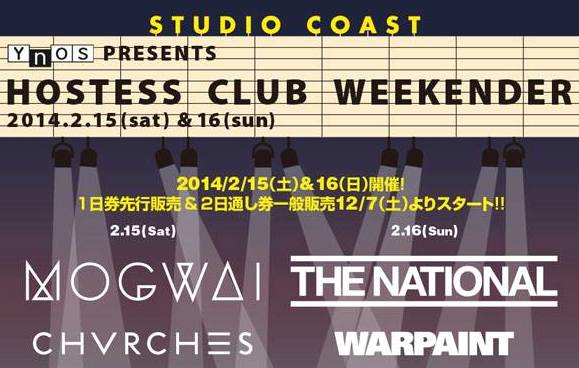 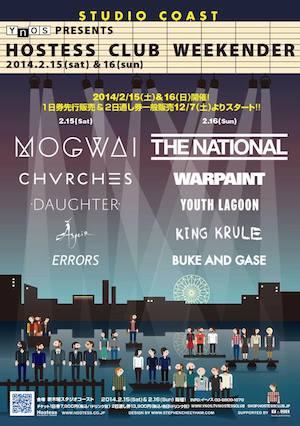 Louder Than War’s Tokyo correspondent fills us in on said city’s Hostess Club Weekender, due to happen in February and headlined by Mogwai and The National.

New Year has arrived in Japan mild, blue skied and with surprisingly more than usual musical delights for the winter’s first months – and at the top of the ‘cannot miss it for the world’ list is the Hostess Club Weekender’s seventh two day urban festival – their first of 2014 – which again boasts a line up rich in both variety and impressiveness of artists.

Hostess Club Weekender starts off strong with the Glaswegian three piece Errors. The band’s amalgamation of synth rock joyousness has run off into tangibly differing veins throughout their four albums. For example, see Stephen Livingstone’s unique yet perfectly fitting vocals on Have Some Faith In Magic, or with New Relics, where, with a quiet shrugging off of the past 30 years, they intertwine bass heavy melodies and purring ambiance to drag you off to 1980s pastel hued dawns; of open top cars and roads with infinity horizons.

The melancholy torch songs of Ásgeir carry an icy desolation with them that fits not just the season, but his home country of Iceland. At 21 Ásgeir has already released Iceland’s biggest ever selling debut album by a domestic artist, has won four Icelandic Music Awards and has been nominated for the esteemed Nordic Music Prize. The simplicity of his harmonies, along with vocals that ebb and flow from sensuous intensity to a broken lament, should make for an interesting and rewarding appearance that may include tracks from his debut English language album In The Silence, which is released on 27 January 2014. 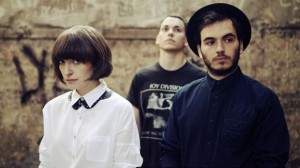 British trio Daughter (see pic right) have delivered a beguiling output of moodily sleek electro melted with a darkly splintered indie folk sound that, like magnolia walls, are often the bare host to the lyrical mural that fills, colours and adorns the space.

Lyrically, the band’s debut album, If You Leave, gave us quite a spitefully venal and fiercely agonising wash of one’s emotional dirty laundry – if now purged – it’s going to be interesting to see where Elena Tonra will take Daughter next.

Scotland’s Chvrches have quickly filled a gap for an energetic synth heavy alternative pop outfit with a vocal sound set to ‘broad appeal’ and they’ve made an album that both critics and public enjoyed. There’s a catchy cohesiveness to the trio and Lauren Mayberry’s voice promises something of a victorious energy that should mean a dynamic live set. 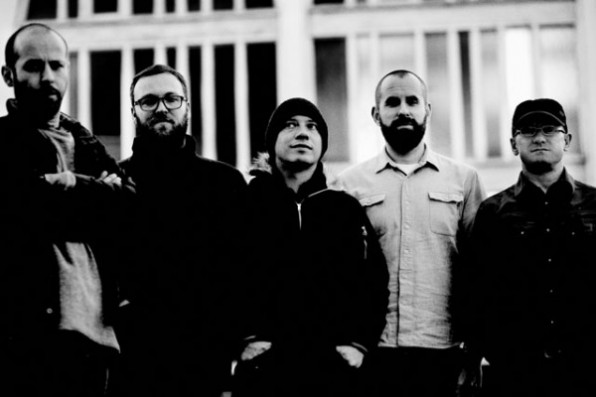 The ever incredible Mogwai (above) headline the first day and it is with tangible excitement we think about what their set might include; with a back catalogue of seven albums and their eighth, Rave Tapes (released 20th January), it’s looking promising that new tracks will pepper a set list of perennial favourites and hopefully personal favourites. The crescendoing richness of Mogwai’s post-rock sound has smoothed in recent releases to a more easily flowing texture of melodic ambiance and if early reviews are to be believed Rave Tapes continues this trend. Regardless of what exactly the band plays, it’s going to be one heck of a performance.

Brooklyn based experimental punk indie duo Buke and Gase’s approach to acquiring their band’s instruments is in a Tom and Barbara a la The Good Life approach: self-sufficient, home-made and a bit quirky; their first two instruments even lead to the band’s name. There are elements of a dozen genres bouncing around their often quite boisterous music, which is less rough and more approachable than anticipated. Where there is lyrical content it swings from confrontational to self-motivational and round to conversational. Buke and Gase’s interesting and difficult to define collaborations of creativity should start Sunday off with a sufficient slap to the chops.

6 Feet Beneath The Moon, last year’s much lauded debut album from King Krule, was full of twisting tales of cynicism and precocious punk soaked angst explored through dominant seventh chords dusted with jazzy undercurrents and hip hop trimming’s. Finding out how this 19 year old Londoner’s urbanite youthfulness and live performance marries up with his nonchalance and gritty, bitter, heavy toned vocals will be intriguing.

The end of January will see the release of Warpaint’s sophomore album (eponymous titled) which has been four years in the making and the indie dream rock L.A. four piece look set to build strongly on their first album, The Fool’s, solid foundations. The band are known for offering a well-crafted show with mesmeric soundscapes, so this’ll be a set not to be missed. 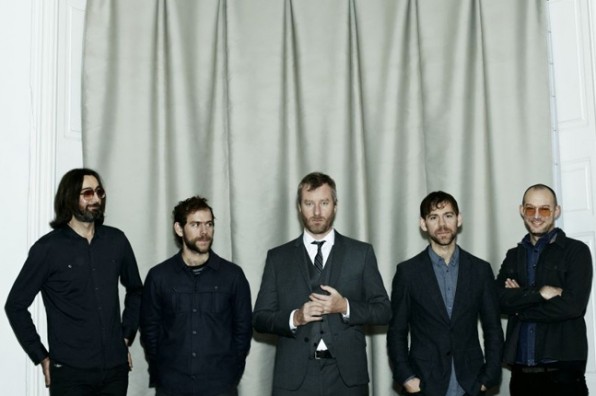 It is a little churlish to say, considering the host of talent to have gone before; however the crème de la crème closes the weekend as The National (above) return to Tokyo. Since the announcement, daydreaming set list scenarios has been the order of stolen free moments, after all the last time the band played here in 2011 it was a triumphant 22 song, electrically intense night and it is a dizzying feeling as we anticipate more of the same. Since their last visit the band have released their sixth studio album Trouble Will Find Me, which offered a soundtrack more self-assured, confident yet still as delicately despondent and potently emotive as those previous albums. The National’s exquisitely layered guitars, alongside the strident yet conscientious drums, tease with soaring melodies that together with Matt Berninger’s fascinating and enigmatic baritone are going to make for a performance that we’ll not want to see end.

Hostess Club Weekender runs on Saturday February 15th and Sunday February 16th 2014 and is held at Studio Coast, Shinkiba Tokyo. Tickets are available now as either a two-day pass or single day tickets.

Hostess Club Weekender has an English friendly webpage where you can get tickets from in English using the service Boardwalk, a mobile phone ticketing service with which you can register and download an e-ticket. You can also use the service without a mobile phone, by registering with your email address to which is sent a QR code which you print out and bring as proof of payment to the entrance on the day. If you need to you can contact Boardwalk for general assistance via email contact@boardwalk-inc.jp

Prices are as follows:

Each day you attend you are required to buy one drink token. One drink token is 500yen and can be exchanged for either alcoholic or soft drinks.