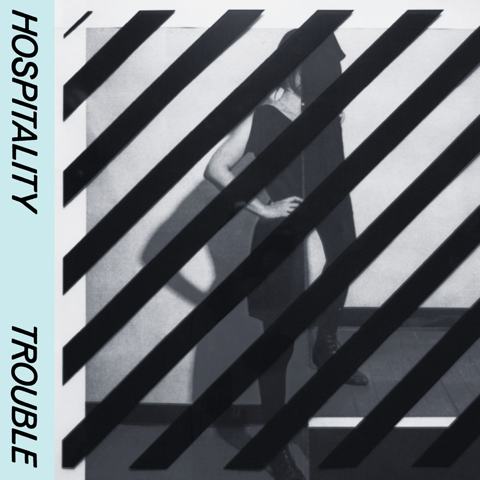 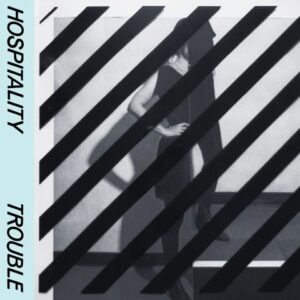 I’ve been waking up with a phrase cutting through my sleep-fuzzed mind: ‘Valentino, I don’t need you. Leave a message. Leave it out to dry.’ It goes round and round as I move through the motions of my morning routine.

This line, like the rest of Trouble, has worked it’s way into my mind and is soothingly mischievous as the synapses snap. But it’s a line from later in the album. It isn’t how this long player begins.

It’s starts with the snarl and punch of Nightingale before the song settles into the warmly mellifluous rock guitar. Between the dulcet guitar, rolling rhythm and airy piano the opener spins out into a spaced-out garage pop beast. It sets the capicious, summery tone for the rest of Trouble.

Going Out is an undulating, laid-back funk party track. Amber Papini’s crystalline vocal curls around the lyrics, they seem delivered with a half-smile; cool but not self-concious. They make a great foil to the bass and bubble of the melody.

And then, here we are, with the track that crept stealthily into my subconscious and bred a thousand wake-up earworms. Inauguration is a minimalist fuzz of static and grumbling beats. A ghostly howl of vocal and synth, the sharp teeth of guitar just starting to cut in as it fades.

Rockets and Jets brings the album’s trio of tricks together; the open post-punk, the synth pop sweet vocal and the expansive prog rock. A spot-hitting trinity of sound that manages to be as catchy as it is mellow.

To have this pop track followed by the almost melancholy Sullivan, stripped back to the bare bones then building to a gentle piano-ballad with a bass line that billows reliably in the background.

There’s a certain pattern emerging across the album as It’s Not Serious again expands outward into psych territory. But the pattern isn’t structured enough to become repetitive, it’s just enough to make you take note that this is a definite collection of songs; laid-back maybe but cast with shade, a seductively dark glint in the eye.

Last Words stretches away from it’s album-mates with a shoulder-popping electro beat and buzz. The energy level doesn’t rise beyond mellow but it’s insistent and by the four-minute mark is breaking out in a guitar solo the likes of which are usually accompanied by open-shirted poodle-permed rockers crotch-thrusting and slashing away at their instrument on a mountain top, unconcerned with their lack of power supply. That’s not to say it’s cheesy; most definitely it is not. No, this is just a BIG sound delivered in a very understated and urbane way.

We’re on the way out now and from that mountain top solo we’re tugged onto a discordant fairground ride with Sunship; the world slipping in and out of focus as the song spins us round. A dazzling array of lights conjured up by the simplicity of the track as once again we  slide along a bridge of gentle prog and the hypnotic vocal melody.

The album closes with Call Me After, one of the shorter tracks on the album and one of the more sparse. The vocal takes a lower register, undulating across the verse, flurrying toward the chorus.

As a sophomore album Trouble is a richer collection of songs, from a band still evolving their sound. It’s a great mix of post-punk space and expansive prog rock with a garage pop edge.

There’s certainly something special here, catchy but gentle. An need embedded in your brain, returning to you in dreams, that mean you waking self will crave the sounds; an album that keeps you coming back for more.

Hospitality have some UK and Irelanddates on the forthcoming European tour. Catch them at:

All words by Sarah Lay. You can read more articles and reviews by Sarah on her Louder Than War author profile. You can also find her on Twitter.