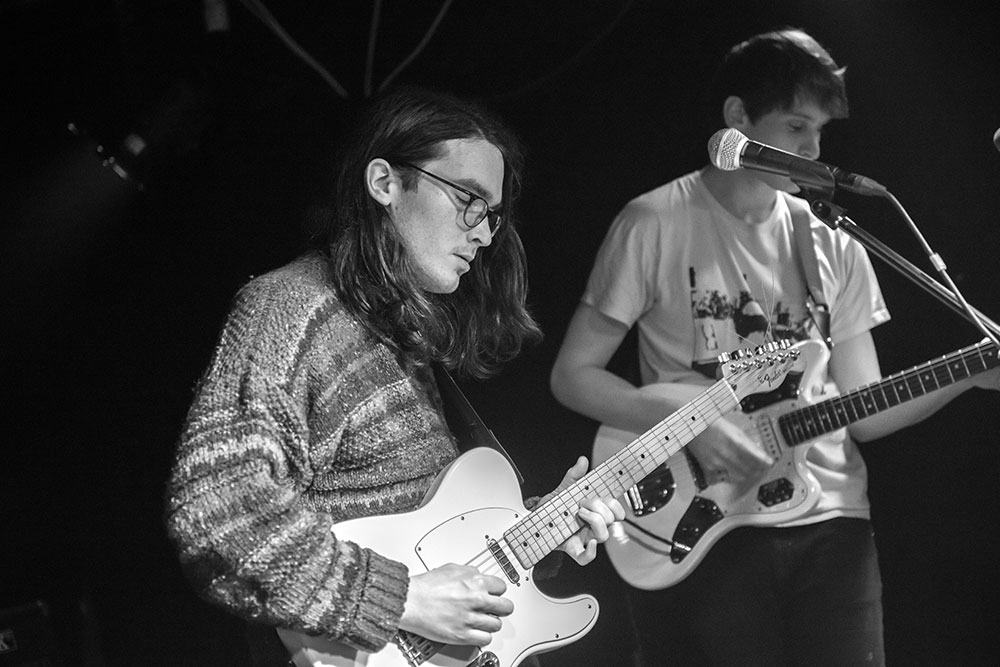 Horsebeach lead by Ryan Kennedy played The Night and Day Café in Manchester on Wednesday January 27th – Nigel Carr reports back on the set for Louder Than War below.

The Night and Day sits in the heart of the city’s Northern Quarter, by day a sleepy café bar with flyer strewn tables, by night one of the coolest little gig venues in town. I step out of the wet and gloomy Manchester weather into the warmth of its welcoming arms. It’s busy tonight with a small crowd in front of the stage and Lancaster’s Night Palms are on so I grab a glass of vino and take a closer look.

They are playing their début single Bird Above The Bath – it’s sweet and melodic and singer Fin sings earnestly in to the microphone hugging a large white Telecaster which he’s borrowed from the headliners. If you haven’t heard them then take a listen, I was surprised just how good they were. 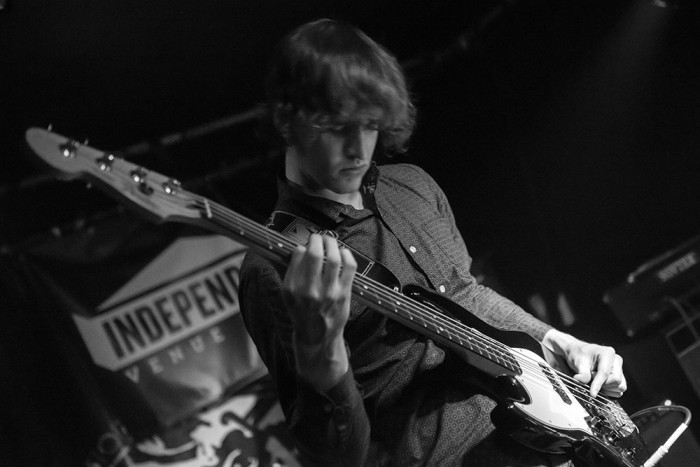 Manchester’s Horsebeach released their eponymous second album ‘II’ in September 2015. Fronted by singer/songwriter Ryan Kennedy who takes time out from his job at Piccadilly Records to write and record in his home studio. The band plays a mix of dreamy Brooklyn breeze with a Manc twist. Think Shins meets Smiths with Sumner style deep, wavy intonations over the top.

After the short Instrumental – Intro, off the second album lulls us in to what to expect for the evening they open proper with A Place Like This. It’s smooth and easy, hopeful pop – light and bright with a summer haze feeling, in complete contrast to the city’s rain soaked streets outside. I can imagine hearing this at a festival with the sun beating down and the smell of trampled grass in my nostrils. Kennedy has a deep, rich voice with a slight vulnerability, taking some time to warm in to this set, but when he’s on form it just sound beautiful over the melodic backings. He stands centre stage looking humble, hunched over his guitar in trademark heavy set specs, woolly jumper and long hair swept behind his ears.

Despite listening to the second album a number of times it’s not until you get in a room with this band that you realise just how local they actually sound. Shades of Manc. pepper this lush mix of sounds especially on songs like Andy and Broken Light. It’s the occasional melancholy Moz style phrase, the jangly Marr like lick, or determined beat that reminds me of songs like Heaven Knows I’m Miserable Now. There are more effects pedals on stage that you can shake a stick at and Kennedy and the band use them to full effect creating wave upon wave of squelchy wash, phase and echo.

There’s contrast within the set too with Kennedy sharing keyboard duties on Midnight Part 2 and Dana with rhythm guitarist Tom Featherstone. It’s early 80’s dreamy synth pop, bright and melodic, soft and dreamy with a touch of phase and the repeated line ‘She wears an oversized sweater to hide her oversized heart’. In many ways this sounds the freshest of the tracks I’ve heard tonight.

Horsebeach are defined by their airy subtlety, warmth and lo-fi detail. There are no deafening riffs or pyrotechnics, no kids slamming in front of the stage. It’s good honest ‘movement’ pop, light, breezy and current and despite the occasional mournful passage it makes you feel good. There are a lot of smiling faces in the crowd tonight and it’s great to see such huge appreciation for this talented young band.