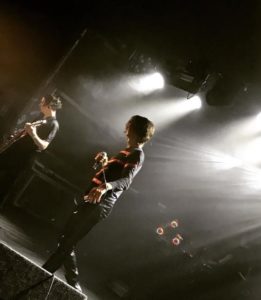 There aren’t many better ways to spend the bank holiday weekend than the excellent value Dot 2 Dot festival, incorporating every almost venue in the city centre over the course of the day. Having provided takeovers of Manchester and Bristol respectively on Friday and Saturday, Sunday brings Nottingham’s turn.

The mixture of local acts playing smaller venues (highlights – Baby Tap at the Angel Microbrewery and You Want Fox at JamCafe) and established acts for wristbanded attendees (Desperate Journalist and Marika Hackman on fine form) brings the day a diverse but cohesive, well-organized feel. By the time I make it to Rock City for headliners The Horrors to “join the final dots”, there is a buzzing vibrancy hanging in the balmy air around the venue.

And why wouldn’t there be? From their emergence in the mid-Noughties through their exploratory journey of shifting sounds resulting in the triumph of last years comeback album V, few other bands in Britain today have had such an exciting evolution. It quickly becomes apparent that the anticipation is justified as they walk out and rip straight into a full-bodied Hologram, the layers of cypberpunk-infused sound setting the scene for a complete sonic odyssey as natural born front man Faris Badwan prowls about the stage projecting star quality.

It quickly becomes apparent that The Horrors live is an experience as much as a gig, as the multi-textured sound seems that makes them so exciting on record is naturally even more visceral live, as the sound seems to expand from beyond the stage and wrap itself around the audience. Coupled with an intense light show, its not that the barrier is broken down as such between band and audience, but as if the listener has been fully pulled into their world.

The set list makes it a world which shifts in almost theatrical fashion between darkness and light, the heady, open-armed optimism of the likes of “Still Life” (from 2011’s Skying) sitting comfortably alongside the oft-brutal futurescapes of V’s material (Machine, in particular, is searingly intense live) pulled together by the evidently huge individual talents of the five of them. Sat in the middle of the set is Sea Within A Sea (from 2009’s Primary Colours) and those of you who read the article I wrote on music and mental health last year will know just how important that song is to me personally, and it certainly feels really special tonight, a cacophony of immersive swirls, emotive lyricism and that hypnotic synth line of Tom Furse’s. It’s okay, guys, I’ve just got something in my eye!

The mixed-aged crowd all seem absorbed throughout the whole set -I overhear some express surprise when it ends, seemingly quickly, but no they really have played for the full advertised hour which has simply flown by. So all that’s left for me now is to say thank you to DHP and everybody behind Dot 2 Dot for putting together such a well constructed event (both musically and with factors such as welfare and safety for the audience, which includes a lot of young students), and, as is evident, thank you to The Horrors for being such utterly sublime headliners.

All words by Amy Britton. Find more on www.louderthanwar.com/author/amy-britton or via twitter through @amyjaybritton