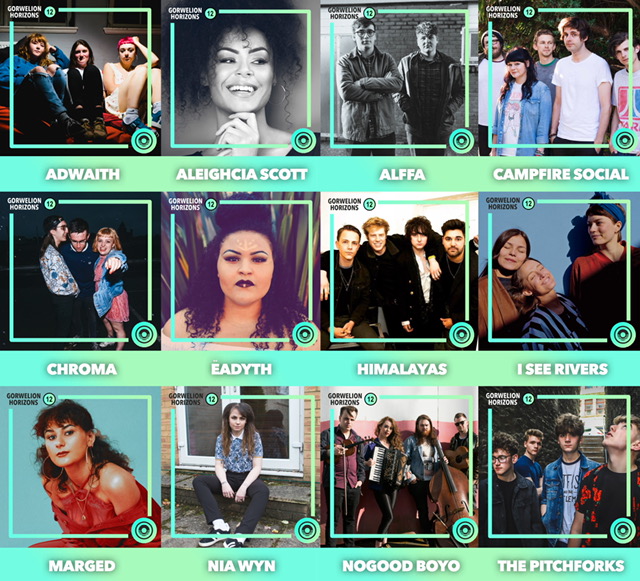 Now in its fourth year the Welsh arts funding project, Horizons has just announced the twelve acts to receive this years backing.

Horizons is a unique showcase of new, independent contemporary music in Wales, supporting and promoting emerging Welsh music talent to wider audiences. Nearly 300 artists applied for a place on the project, which is now in its fourth year.

A diverse list of a dozen of the finest emerging acts from across Wales, this year’s Horizons intake is notable for featuring strong, unique female musicians with 10 of the 12 made up of female solo artists and acts featuring female members. All 12 artists have a unique contemporary sound covering musical genres from indie, reggae, rock, folk and blues.

The Horizons project will be bringing music to many festivals over summer 2018 starting with a launch show at this year’s  BBC Music’s Biggest Weekend Fringe Festival in Swansea, where Huw Stephens will showcase some of the acts live on BBC Radio Cymru. Tickets for the showcase are available from the Horizons website (link below).

The twelve selected Horizons artists are:

Adwaith: Carmarthen trio craft brilliant bilingual songwriting; their recent single ‘Fel i Fod’ has been streamed over 100,000 times on Spotify.

Aleighcia Scott: Cardiff based reggae singer with a unique style and vocals whose wowed crowds in Wales, UK and Jamaica.

Alffa:  An exciting teenage two piece rock n roll band from Llanrug who are inspired by the blues.

Campfire Social: A Llangollen collective whose exquisite knack for vocal harmonies and catchy instrumental textures earned them a slot at a Korean festival with Focus Wales last year.

CHROMA:  Fearsome Pontypridd rock trio led by Katie Hall, one of the most charismatic frontwomen Wales has produced in quite some time and a band BBC Introducing booked for Reading and Leeds last summer.

Eadyth: A unique young Welsh language electronic producer from Merthyr,  whose futuristic and empowering sound is influenced by urban, soul and electro.

Himalayas: An incendiary rock four-piece from Cardiff, they have been delighting crowds at This Feeling gigs across the UK, and showcased at SXSW for BBC Introducing this March.

I See Rivers:  A Tenby adopted female trio hailing originally from Norway crafting their own brand of awe-inspiring float folk. Through a studio in West Wales they found themselves drawn to and embraced by Wales.

Nia Wyn:  An incredible voice and songwriting talent from Conwy whose work encompasses folk, country and pop she recently worked with Paul Weller on new songs.

No Good Boyo: Cwmbran four-piece whose rousing celtic folk-inspired sound has delighted crowds at the National Eisteddfod of Wales and Lorient Festival, France.

The Pitchforks: A young Tonypandy band whose floor-filling indie rock sound made them one of Radio One’s Huw Stephens’s ‘Ones to watch for 2018.’

The 12 artists will be offered a platform at events across Wales and on BBC Wales’ national radio services – BBC Radio Cymru and BBC Radio Wales.

“We’re proud to support Horizons for a further year and see another 12 artists have a creative and potentially career changing year. There have been some incredible opportunities created so far and we’re looking forward with excitement more incredible music experiences.”

“The Welsh music scene has probably never seen such a time as this – a real explosion of creativity in so many towns and cities, and so we’ve been absolutely spoilt this year with the selection of talent.  We’ve got an incredibly diverse shortlist of artists, and we can’t wait to follow their journey for the next year. A few of the acts will be familiar names but there’s also bound to be one or two musical surprises for people to discover.”

Joseph Williams from the band Himalayas, one of the twelve bands selected said:

“It’s a real pleasure to be a part of BBC Horizons along with other great Welsh artists. We’re looking forward to working closely with the Horizons team to help progress and develop as a band.”

Horizons is a unique showcase of new, independent contemporary music in Wales.  Now in its fourth year, Horizons is a collaboration between BBC Wales and Arts Council of Wales.The Horizons project aims to be a comprehensive showcase of promising talent in Wales.  From providing promotional and performance opportunities.