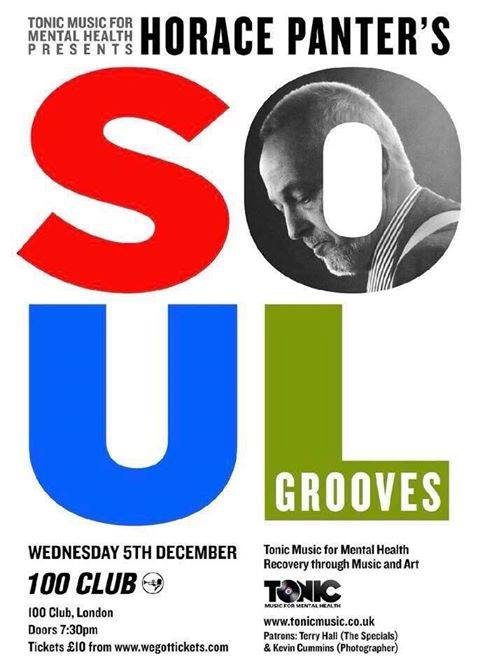 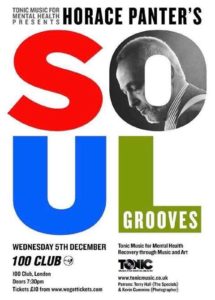 Fancy a nice night in London at the beginning of December?  Quality Music from a Legend?  Help raise funds for a good cause into the bargain…. well get along to this!

Horace Panter, a.k.a. Sir Horace Gentleman, needs no introduction as founder member and bassist of The Specials.

Soul Grooves will allow us to see and hear Horace in a different light, playing tunes by the likes of The Meters, George Benson and Booker T., alongside a band of highly talented jazz and soul musicians.

My music-biz mate Micko Westmoreland plays with Horace in another band who contribute to the Specialized charity: The Spammed -with Rat Scabies and Kevin Eldon. I asked Micko about Horace.

An extraordinary chap. He has none of the airs and graces that a man of his legendary status could have. He’s nicknamed ‘The Gentleman’ for good reason. A generous musician to play with, always supportive and encouraging and dynamite on four strings. His timing is amazing and his ability to make complex things seem simple is his ace in the pack.

Even with the Specials recording and gearing up for a world tour he still finds time to support small charities like Tonic.  It’s no surprise that he was a ‘a special needs teacher in the fallow years’ before the band reformed.

The ‘Soul Grooves’ band all have impressive CV’s:

Nikolaj Torp Larsen – Hammond organ.
Nikolaj plays keyboard with The Specials, and is co-writer & co-producer of The Specials new album ‘Encore’. A highly successful jazz musician and film score composer, who has toured and recorded with many well known artists including on Adele’s ‘Skyfall’.

Kenrick Rowe – Drums.
Kenrick is drummer on The Specials new album ‘Encore’ and will be joining them on their 40th anniversary tour next year. As a studio session drummer with over 30 years experience, Kenrick has worked with many established artists in the British and Jamaican Reggae industry including Aswad, Janet Kay, Carol Thompson, Dennis Brown, The Mighty Diamonds, Alton Ellis, Sugar Minott and Jackie Mittoo, as well as leading jazz artists such as Courtney Pine and Jazz Jamaica All-stars.

Dave Keech – Trombone.
Dave’s band, Close To The Bone, draws on influences ranging from Ellington and Mingus to soul, funk and hip-hop. He spent several years as a mainstay of the Ray Gelato’s Giants, touring extensively throughout Europe, as well as appearances at Montreal Jazz Festival and Carnegie Hall, New York. Dave is founder and MD of JazzUp; the legendary jazz night at Hitchin’s Club 85.

Jim Hunt – Tenor & Baritone sax.
Jim has worked with an extraordinary breadth of artists. As arranger, saxophonist and horn section leader he has toured and recorded with Primal Scream, Richard Ashcroft, Paloma Faith, Amy Winehouse and Noel Gallagher to name a few.

Chris Cobbson – Guitar.
Chris was principle guitarist for Herbie Flowers Rock School. He has toured with Osibisa, Courtney Pine, Maceo Parker, Fred Wesley and many more, and adds his unique brand of funk and jazz guitar to Soul Grooves.

Eddie Piller (MD of Acid Jazz Records, Soul DJ, Host of The Modcast, Broadcaster & Writer) will be DJ’ing on the night.

This event is a fundraiser for Tonic Music for Mental Health, a non-profit organisation that supports people recovering from mental health difficulties by providing free music and art groups, and funding artists to produce their own music.

And the all-important  Ticket link

Preview put together by Ged Babey for LTW