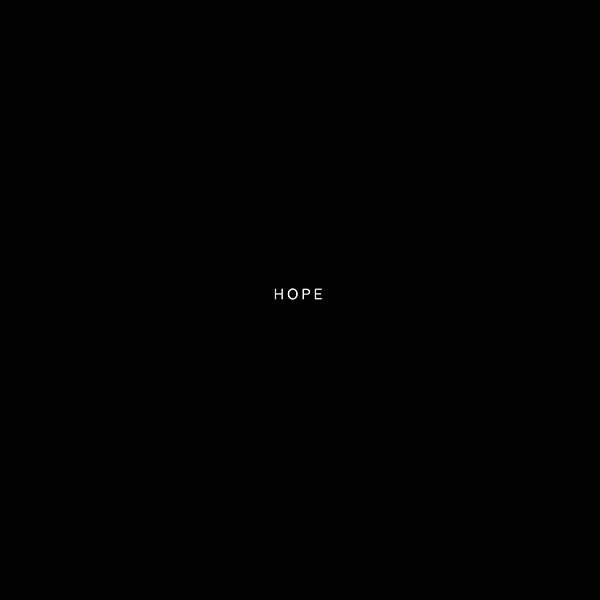 Hope are a band from Berlin who could be classified as Gothic, if you feel those things are worth noting.  According to reports from my German contacts, they also represent a new, more sober, angrier zeitgeist at large in the city’s music scene. Their arty, black and white videos and artwork and the PR froth referencing to Algiers (who are fans) and Savages, would seem to point towards something we’ve all seen before. Their debut record, however, reveals something much more beguiling.

It’s a record that slowly reveals these surprises. The clattering, tense album opener, the single ‘Kingdom’ seems to beat out an invitation for 40 or so minutes of sturm und drang, but it’s somewhat misleading; as the expected battering surprisingly gives way to a set of deep, brooding soliloquies with vocal intonations to the fore. Initially underwhelming (especially given the personal nature of their music) this sonic reserve really starts to make an impression by dint of the hidden melodies that steadily, if unobtrusively steer the music and set the pace. The stately ‘Cell’ is a classic example; the guitars build particularly effective in both creating a backdrop and patiently pinning out a melody that then effortlessly segues into the following, counterpoint track, ‘Raw’. Now and again a more cavernous sound bellows forth, but instrumentation is kept busy with painting brooding washes of sound, akin to a theatre backdrop. It’s very very dreamy at times. By the end of side one, caressed by the guitar washes of ‘Skin’, you wonder what all the fuss was about at the beginning.

One thing that strikes home forcibly after a couple of listens is the pronounced theatricality of this record. It’s an album full of gestures; gestural music you might say. And there is a marked sense of physicality – underpinned by the lyrics and their delivery – which I associate with the stage. For one thing, the lines are declaimed, or repeated rather than sung; the sort of delivery you’d expect at a musical or in the theatre. Singer Christine Börsch-Supan’s delivery is mannered and vowels are overly pronounced and prolonged (there are lots of “ooohs” and “aaahs” and “eeehs” throughout). Not only that. Scanning through the lyrics for these 8 tracks we see continuous reference to the body. To wit: “heart”, “fingernails”, “arms”, “fingertips”, “skin”, “mouth”, “feet”, “scars”, “stitches”, “knees”, “thighs”, “teeth”, “shoulder”, “fist” and “eyes”. We also get actions related to the body. Here: “touch”, “bruise”, “feel”/ “felt”, “grasp”, “kneel”, “spit”, “bite”, “drop”, “bleeds”, “lay”, “breathing”, “stick” (to skin) “hold” (a body) and a space (beside a body). A remarkable word haul for one subject.

For all the situations suggested in the lyrics it’s not a particularly tense record, rather it’s very romantic music. As Uncle Monty once said of the humble carrot, it has mystery. I can imagine these tracks could be repackaged as winsome, folksy pop tracks or gothique lullabies. The languorous ‘Moths and Birds’ starts off like a Lee and Nancy track, or even the standard ‘Summertime’. Shades of the Gothique but not Goth, if you will. At times the unerring, eery quiet is even reminiscent of Joy Division’s more reflective moments. ‘Skin’, for example, sounds very much like a cleaner, C21st, predominantly feminine take on ‘In A Lonely Place’… Goodness. We do get more concessions to noize on side two with the rumbling opener ‘Glass’, the Suicidey bassline setting a brisk, seedy tempo. On ‘Drop Your Knives’ – another elegant soliloquy – the guitars yet again steer the melody line and create space for a very attractive low key rumble. But, yet again we are drawn towards the omphalos, and find ourselves horizontal after the slow bliss-out of closer, ‘Here Lies Love’.

What to think? Well, an intriguing listen in retrospect. A record that – due to its personal nature – puts me in mind of Blue Nile’s ‘Hats’. As such, Hope’s debut could remain a secret listen, a small-town bedroom classic. And the more you listen you can’t help but wonder if, despite the stark image and very clear they haven’t really pinned down what makes them tick, musically, let alone explored it in full. But for now, this record will do very nicely.