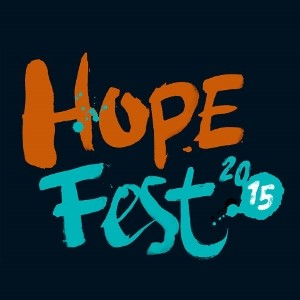 Louder Than War’s Roxy Gillespie reports on Liverpool’s Hope Fest where a good cause was helped by good music.

Having banged on about what a good cause this is, how we should help those less fortunate than ourselves, Blah, Blah, Blah, for quite some time now, the time had come to get out and actually see the bands Anna Grace Henney had arranged to perform at Hope Fest 2015.

Friday saw me at Maguire’s Pizza bar, the hidden gem of Liverpool venues. Standing in the suitably seedy back room in my Docs (the floor is in no way even), I was treated to a set by Unconquered Sons, a new rock/ metal band from Liverpool who had the unenviable task of opening the proceedings. The band brought a good slice of their chunky, deep and dirty sound to the Maguire’s stage. Containing more metal than your average Sherman tank, the set, including ‘Across Coals’, ‘No Man’s Land’ and ‘Addiction’ , provided a suitably harsh and grindingly heavy beginning to the night. 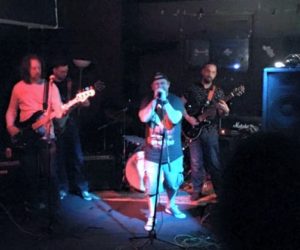 The second act, Los Gatos, added a touch of dishevelled punk/ garage to the night. The vocals from Chris Lee brought this act a sheen of originality, the slightly shambolic music set of perfectly by the tremulous and original intonation. The set finished on the excellent ‘Deadline’, more rock than punk, but none the worse for that.

Villy Raze, already known to me from the band Sheepy, took the stage next with a set featuring some outstanding reggae and punk based anti-pop. Tracks like ‘Making Moolah’ and  the superb ‘Bedroom Walls’ had the room buzzing, with a cheeky extra track thrown in at the end of the set, ‘Uncle Betty’ clinching the deal. The prospect of Villy’s soon-to-be-released album, Secret Six Feet Under’, is an exciting one. 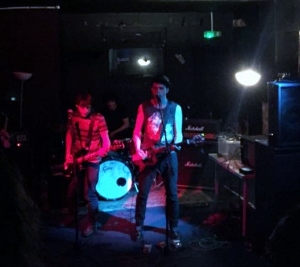 Saints of Arcadia travelled a long way from Newcastle to play Maguire’s. The classic rock-based set was played to perfection with verve and true professionalism. Even if this isn’t your sort of thing, the sheer quality of the music deserves applause. Rock fans must fall over themselves to see these guys play. The cover of the Led Zeppelin track Immigrant Song was tremendous and the band’s own output was exceptional. I heard funk elements in some of the tracks, such as ‘State of Grace’, and the last track ‘Beautiful Deceit’ showed some serious vocal perfection. Thus ended a memorable first Hope Fest night.

Day two started a little earlier. It had always been a priority to see The Choir With No Name and the Crisis Band. The festival as a whole has the theme of empowering, as well as helping, homeless people, so seeing them as performers was always high on my agenda.

Brink was full for the afternoon performance. With songs like the ABBA track ‘Money’ the performance was upbeat and joyful, with the crowd cheering them on throughout. It was great to see the performers so obviously enjoying themselves and giving the audience such a quality set. The Crisis band also gave us three original songs, which finished the performance on a high note. I’d like to say I was too much of a hardened hack to feel moved to tears by the performance, but it wouldn’t be true.

I made my way to Sound Food and Drink to catch a set by Chris Chandler. This guy obviously enjoys playing, and music was upbeat and joyful. The guitar playing excellent, with hints of Flamenco at times. I’m not a fan of acoustic acts, but I enjoyed the set, and tracks like ‘Baby Blue’ went down a storm. His cover of ‘Across the Borderline’ brought tears to my eyes for a second time.

Breaking for food, I didn’t make The Arts Club until part way through Steve Thompson’s set. Already known in the area as a top quality act, the polished rock of Steve Thompson and the Incidents play never disappoints. The band played a set that thrilled the steadily increasing audience.

Black Seasons are another local favourite who never fail to bring in a crowd. Their heavy, yet contemporary style topped with distinctive vocals re-affirmed their place at the upper echelons of the local scene. Tracks like ‘Maverick’ show just how good the band are.

The headline act, Alias Kid, have been making waves across the country, with music luminaries such as Alan McGee tipping the band for the big time. The crowd were obviously anxious to see what all the fuss was about, except for those who obviously already knew and sang along to tracks like ‘Revolution Sometime’. The rough-edged indie the boys produce has enough of the mainstream to excite listeners on the radio. Although not a band I would normally listen to, I was in the minority and the set went down a storm. So, Day two done I went to ready myself for some more fine music on the last day of the festival.

I was pretty tired by the time I reached The Magnet on Day three, but the quality of music on offer here made the trip into town worthwhile. Wild Rossa and the ’88 were bringing some beautiful guitars and vocals to the stage. Originally part of the cancelled Circo line-up, the duo had decided to take the offer of a slot at The Magnet and were wowing the crowd with the sophisticated interplay between acoustic and soft, silky electric guitars topped by lashings of vocals, sometimes a little wistful, sometimes smooth and rich like melted chocolate. A great act and a fitting start to what turned out to be an impressive night.

The striking twin vocals provided by the Kettle sisters, Joanna and Davina, drive the fine rock that Shakedown Stockholm produce. Sporting not one, but two sets of twins, the Winsford band have already been tipped for great things by both Jonny Marr and Alan McGee. The set began with ‘If I Were the Devil’ and carried the full-on rock and delectable harmonies throughout. Highlights included ‘Reverie’, ‘Forgive; Forget’ and the finishing track ‘Who Says I? 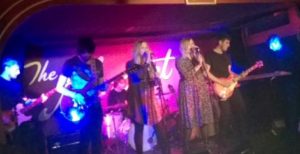 Shamanarchy, another band featuring strong female vocals, were next. They were full of rock and roll attitude and the music reminded me of punk and psychobilly in the vein of one of my all-time favourite bands, The Cramps. Unfortunately, the set was brought to a temporary halt by a broken guitar string. Whilst the problem was being fixed, the drummer and bass player played on, a bit of cool improvisation to fill the musical void. Even with the problems, this was probably my favourite set of the evening, quite an accolade considering the talent on offer.

The Sundowners have a solid reputation on the psychedelic circuit, and the acoustic set they brought to The Magnet was superb. The dual female vocals that really couldn’t be faulted showed why The Sundowners are such hot property at the moment. The 60’s vibe carried through the set, with the addition of tambourine and maracas adding to the retro feel. Tracks like ‘Medicine’ provided a mouth-watering end to Hope Fest at The Magnet, and, for me, the festival as a whole.

As usual compromises had to be made, due to listing clashes, everyday life inconveniently butting in and getting from one venue to another in time. There were bands I would have loved to have seen, but I think I got a great taste of the myriad different bands on offer. I hope the donations kept rolling in throughout the weekend and that the main aim of helping those who struggle to keep any sort of roof over their head was achieved. That, after all, was what this weekend was about. The vision and hard work put in by Anna Grace Henney produced a wonderful festival featuring top class music from right across the spectrum. Thanks to all the acts that brought such quality music to the event, I couldn’t have been more impressed. Let’s keep our fingers crossed that Hope Fest continues to go from strength to strength.

Photos of Villy Raze and Unconquered Sons courtesy of Los Gatos. More Info on the festival can be found at its official website : www.hopefest.org.uk.