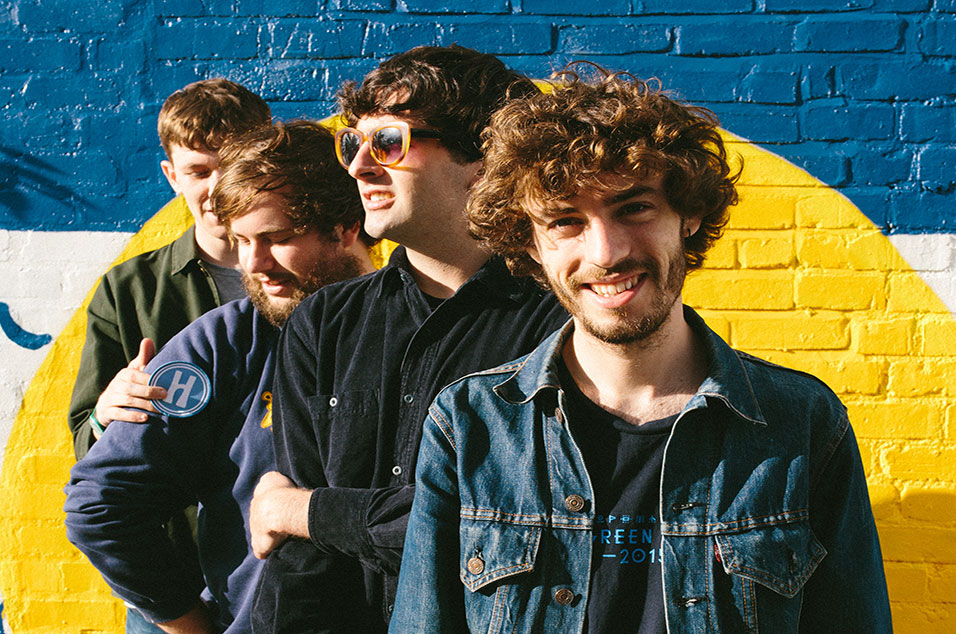 Hooton Tennis Club are one of the best young bands on the music scene at present. With two albums already released, the second Big Box Of Chocolates just released, and their live TV debut recently secured they are moving onto pastures new and gaining raves reviews across the board. Matt Mead caught up with the band and find out if they really do like their chocolate.

LTW: So, where did you all grow up?

Ryan and Harry grew up in Chester, James, and Callum grew up in Ellesmere Port. Near the Rossmore; The Rossy.

What are your first experiences of music?

James: I had a toy radio transistor type thing as a small kid, probably a Fisher Price one, a lovely hue of red it was. I remember my Mum getting me some tapes to record songs from it. The first song I taped from a radio station was Outkasts ‘Ms. Jackson’. I listened over and over and and couldn’t believe I had the liberty to replay the sweet groove and melodies of a song that was explicit and far from a little boy buying from Woolworths. Then Britney Spears released Hit Me Baby One More Time.

Ryan: My Mum tells me I used to wander round the house with my little blue cassette player listening Crocodile Shoes by Jimmy Nail on repeat.

Callum: I remember being about three or four and listening to Buffalo Soldier by Bob Marley on repeat with my Dad one hazy, sunny weekend in our very first house. That’s my earliest memory of music. My brother and me also used to stomp around the living room to Underground by Tom Waits on Swordfishtrombones, with it endlessly on repeat until Gladiators came on.

Harry: In infant school we made a big mural in our classroom based on Lucy In The Sky With Diamonds. We were each given an image from the song and we had to make it using coloured paper, felt, glitter, etc. Lots of PVA glue was involved. I made cellophane flowers of yellow, not green.

Not “serious” as such, and not the first music we heard, but the four of us collectively used to listen to Supergrass religiously. We used to get together and watch the Supergrass Is 10 documentary, which greatly inspired us all. We thought: “They’re just dicking about, making silly songs and videos, that’s what we do!”, So in a weird way Supergrass made us committed; seriously committed to larking about.

What made you start to play the instrument you currently play?

Harry: My brother and I each received guitars for Christmas when I was about 11. George learnt the Blink 182 back catalogue and I spent the year trying to play Wild Thing by The Troggs. For the next Christmas we decided we needed to up the rock in the Chalmers house, so Father Christmas very kindly got his elves to make us a drum kit.

James: My dad took me to buy a second hand guitar one from the ‘infamous’ Brook Lane in Chester one slow Sunday. I was 16 and obsessed with long haired rockers. Then Harry taught me Wild Thing and they’re the only chords I know to date.

Ryan’s Mum and Dad bought him a guitar for Christmas one year, and Cal realised guitar was hard so bought a bass instead.

Who are some of your musical influences?

Ryan: I really like Animal Collective. I love the way they work, and the way they change their style from album to album, but I also like what I consider to be their relaxed approach to making music. A bit like Pavement, Richard Buckner, or even Scott Walker: artists which have said in interviews: ‘If the song is not there don’t force it’ They stay very true to themselves; have patience, don’t force it.

Harry: I recently bought my very first pair of good headphones, oh my god, what a great decision! I’m hearing bits in songs that I’ve never heard before. I’m currently listening to the second half of The Beatles’ back catalogue over and over again and marvelling at the production. George Martin and Geoff Emerick are unbelievable. Sgt. Pepper on a four-track?! Jesus Christ. So at the moment it is production and studio work that is influencing me. I want to sit around with lots of equipment and try and make something interesting and fun. We’ve got an eight-track, so it’s got to be twice as good as Sgt. Pepper.

James: I recently went shopping to a large supermarket near my flat one slow Sunday. I had Scott 3 in my third pair of good headphones and the whole experience was magical. I traipsed through the abandoned terraced Welsh streets and past ‘The Empress’ pub (Ringo’s solo debut cover) immersed in a visually bleak, dsytopian setting, yet to a beautiful, sweeping orchestral sound track. I like my slow Sunday adventures with Scott Walker a lot.

Cal: I’m really listening to Teenage Fanclub and Scott Walker at the minute. Also Public Enemy and A Tribe Called Quest. I’ve also been reading a lot of stuff about Neutral Milk Hotel and the way they work. They were part of a collective group of musicians called The Elephant 6, which all worked together on a sort of scene. I’m not necessarily too enthralled by the music but this way of working interests me. You should read the interview from 1997 with Jeff Magnum on the Pitchfork website. It’s great. About how he worked and how In the Airplane Over the Sea formed in his head over time. You really get a sense of his frustration with the interviewer. I’ve also been reading the Paul McCartney biography, which has been really inspirational.

How did you get to know each other before the band took shape? 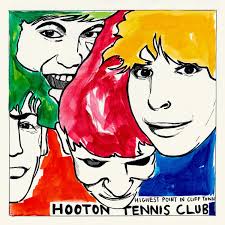 Who wrote the first songs as a band?

The very first song we can remember “writing” (loosely) was a stupid little ditty between Ryan and Cal called Cannabis Chocolate when we were about 14. But, as Hooton Tennis Club, the first batch of songs came in the form of an EP called Long-Barrelled Saturday, which was shortly followed by another EP called I Was A Punk In Europe (But My Mum Didn’t Mind). That one featured four songs, all of which made it onto our debut album Highest Point In Cliff Town.

Has there always been one main song writer or do you jam out the songs and then form the songs?

James and Ryan are the main songwriters; they tend to write the lyrics and come up with some chords, and then the structure and style of the song is glitzed up in the practice room with the four of us. That’s when the jamming begins.

You have quite a unique but brilliant looking stage set up with the bass player in the middle of the both guitarist. What is the reasoning behind this?

Because Cal’s dance moves are uniquely brilliant! Also, we don’t the like the idea of a “front-man”, We are all about the collective, and having two lead singers comes across better if you spread them out, rather than having James and Ryan fight for the centre.

You have just released your second album Big Box Of Chocolates. How did this come together?

We had a bunch of songs ready to go and Jeff Barrett of the sublime Heavenly Recordings suggested we work with the equally sublime Edwyn Collins, in his new studio up in ‘serious’ Scotland. We’re always writing, we have an eye on the prize so to speak, and we did a first album, so the next step was a second album. Also, we want to do a third album, and you can’t do that without a second album.

Where did you record the album? Did the songs come together quite quickly for the album to take shape?

We recorded the album up in Helmsdale, at Edwyn Collins’ Clasnarrow Studio. The majority of the songs had been finished at a little writing retreat in North Wales, but quite a lot were unfinished or not quite right when we went up to Scotland. Quite a bit of ad-lib stuff happened in that studio, which was lovely to do. Can you give us some lowdown on some of the songs and what they are about?

Sure! A lot of the songs are about actual people and events – some more fictionalised than others. The track Bootcut Jimmy The G, for example: the lyrics for that one come from a party James and Ryan went to. It was this guy Jimmy’s thirtieth birthday party, but James and Ryan didn’t know what Jimmy looked like. When they arrived at the party (invitied by a friend of Jimmy’s) they saw this guy dancing on his own in the middle of the room underneath a giant discoball. He was wearing bootcut jeans and an oversized blanched white shirt from Next. He was loving it! Assuming this was Jimmy – later discovering otherwise – James and Ryan knew a song needed to be written… Then, on the other hand, Katy-Anne Bellis is an actual person. She lived with Ryan in a big shared house in Liverpool. After a year and three months she left that house. Those lyrics describe actual events; it’s all 100% true.

You recently appeared on Soccer AM. Do you have any other TV appearances lined up?

Soccer AM was our TV debut. We were talking about TV appearances afterwards. What is there available for bands? We’d love to be on Jools Holland (dreaming…), but other than that show we couldn’t really think of any other TV shows featuring a live band… It’s sad, there mustn’t be a market for it like there used to be..?

You’re on the road later in the year to play some dates. Any plans for a full UK tour?

Not as of yet, we’re keen to do a support tour, or a tour of our own later in the year, but we’ll just have to wait and see. We are more focused on writing new stuff at the minute and we’re planning on another ‘writing retreat’, perhaps to a lovely European city. So, we’ll see how that goes.

Writing album three, and playing some shows/festivals in summer.

It’s not a chocolate bar, but we all got quite addicted to Chocomel when we were touring in Europe. There’s some secret shit in that stuff! If they could make a Chocomel bar, then we’d all go for that one

All words by Matt Mead. More writing by Matt can be found at his Louder Than War’s author archive.