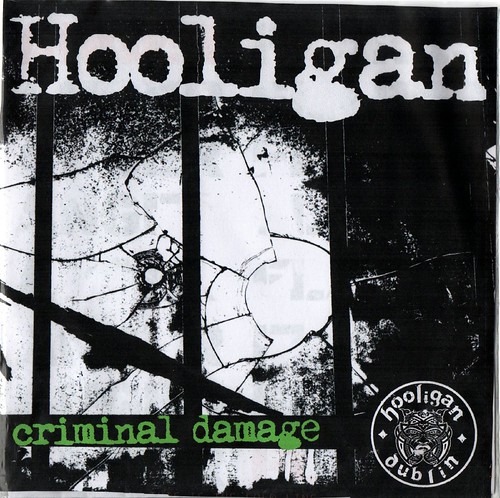 The fourth EP from Ireland’s punk-rockers Hooligan is the most accomplished in the band’s catalogue to date. Criminal Damage features a whole range of talent including Cockney Rejects’ Van Frater on guitar and bass; Decca Wade and Nicky Buck (original and latter Angelic Upstarts) on drums; while Wade and Mond Cowie (another Upstart) share the production duties.

A sense of real togetherness on this EP stems from the band members’ chemistry and their love for making punk-edged old-school rock music. Dave Linehan confidently leads Hooligan from the front on four brand-new tracks, which benefit most notably from some impressive guitar work and backing vocals from the musicians accompanying him.

The heavy, sing-a-long punk-rock jams that Hooligan excels in making are at their most defining here. The irony-ridden title track screams “Criminal damage/ It’s against the law!” to rousing effect; while ‘Street Punk Hero’ is a true punk anthem for those modern-day everymen living and keeping the culture alive.

By the time the EP reaches track three, ‘Bastards’, it becomes most obvious that the Hooligan guys are having a lot of fun on Criminal Damage. Linehan and Frater’s guitars face-off frantically and sound more and more impressive as the track plays on; while ‘Keep The Faith’ has plenty of accessible “woahhh ohhhhhs” to maintain the feel-good nature of the record.

There are two, separate releases of Criminal Damage this month: A stand-alone 7″ on Oi The Boat Records in beer-coloured/black; and a rare edition for record store day (April 19th) titled Under One Flag. To those looking for music reminiscent of punk’s golden era, that still sounds fresh and innovative: Give thanks by buying the vinyl and supporting the scene.

Hooligan’s music can be found here HERE. The group is also on Facebook HERE.