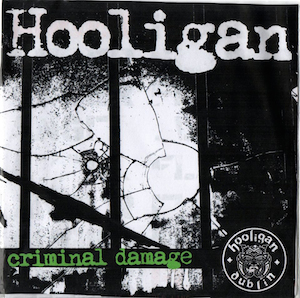 The fourth EP from Irish punk rockers Hooligan Dublin is the most accomplished in the band’s catalogue to date. Andy Carrington listens in.

Criminal Damage features a whole range of talent including Cockney Rejects‘ Van Frater on guitar and bass; Decca Wade and Nicky Buck (original and latter Angelic Upstarts) on drums; while Wade and Mond Cowie (another Upstart) share the production duties.

A sense of real togetherness on this EP stems from the band members’ chemistry and their love for making punk edged old school rock music. Dave Linehan confidently leads Hooligan from the front on four brand new tracks, which benefit most notably from some impressive guitar work and backing vocals from the musicians accompanying him.

The heavy, singalong punk rock jams that Hooligan excels in making are at their most defining here. The irony filled title track screams

“Criminal damage
It’s against the law!”

to rousing effect; while Street Punk Hero is a true punk anthem for those modern day everymen living and keeping the culture alive.

By the time the EP reaches track three, Bastards, it becomes most obvious that the Hooligan guys are having a lot of fun on Criminal Damage. Linehan and Frater’s guitars face off frantically and sound more and more thrilling as the track plays on; while Keep The Faith has plenty of accessible “woahhh ohhhhhs” to maintain the feel good nature of the record.

There are two, separate releases of Criminal Damage this month: A stand alone 7″ on Oi The Boat Records in beer-coloured/black; and a rare edition for record store day (April 19th) titled Under One Flag. To those looking for music reminiscent of punk’s golden era, which still sounds fresh and innovative: Give thanks by buying the vinyl and supporting the scene.

Hooligan’s music can be found here. The band is also on Facebook here.