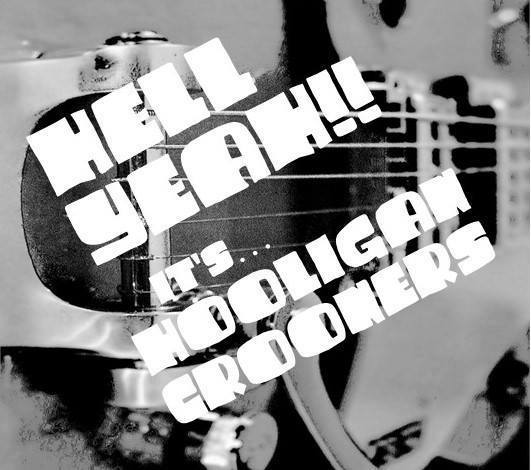 Back to the old school?  Some kids got put back a year and somehow just never left…and they’re still there forty years on.

This is proper 1976/77 punk in the same vein as the Boys, the Vibrators, Generation X and a host of others who had nothing to  do with notions of Anarchy, Hate and War and the politics of punk.

This is rock’n’roll influenced by pub rock and glam with a smidgen of punk attitude.  Like Baby Baby, Ready Steady Go and the First Time.  There’s nothing new about it. Its what I call Only In It For The Birds After The Show Punk.  And I’m not dissing it, just stating facts.  (Hooligan Crooners might disagree and be actively political blokes but there’s no indication of it in the 4 songs here …. )

They do it well though. If they didn’t I wouldn’t waste my time telling you about them.

What is interesting is the four songs are re-mixed by four diverse music veterans.

Matt Dangerfied from the Boys ‘Alternative Chartbusters mix’ just makes the song sound even more like the glorious pop-punk of his erstwhile band. James Atkin (ex-EMF) drags the sound into the late 80’s/early 90’s. The other couple mixes are…. ‘interesting I’m sure you’ll agree’, as Peel used to say, have a listen on soundcloud-bandcamp thingy-ma-bob.

The original mixes are the ones that you’ll come back to time and time again if this is your kind of leopard-skin an’ leather jacket rock’n’roll.

Frankly and Kings of Summer have that Billy Idol sneer and great-big Bollocks guitar sound but are basically soppy love songs.

Hell Yeah has a fabulous chugging pace and that classic Motown/Shangri-La’s/ Mary Chain intro and could be a lost Dangerfield/Plain number.   The lyrics have some great mixed metaphors and strange similes;

She said she loved him, she did.

the way the junk loves the junkie, the organ grinder loves his monkey…

the arsonists, the flames first kiss before the sirens break the night.

Hell Yeah!  It’s corny and cliched but it rocks and it rolls and the Hooligan Crooners are absolutely appropriately named, because they look like thugs but sing like Crosby in a leather bike jacket.

More Info on Hooligan Crooners can be found on Facebook and Bandcamp.

All words by Ged Babey Baby Baby.  Won’t you be my girl….  (Thanks to Gary Sarum for bringing the band to my attention).