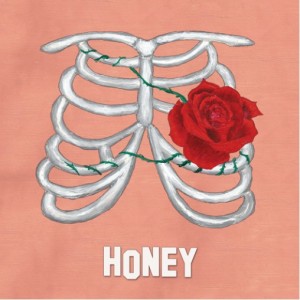 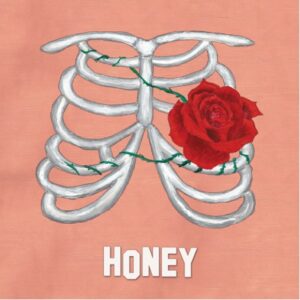 I first heard Honey on the Jeffrey Lee Pierce Sessions album Axels  and Sockets on which they did a great version of Thunderhead. Listening to their debut album it makes sense they were asked to do it. The ferocity, urgency, honesty and downright dirty rock of The Gun Club can be found in bucket loads with Honey. There’s a DNA thread going down the years that some bands are lucky enough to have by pure symbiosis. The liner notes of the JLP sessions says Honey had never heard of the Gun Club. They didn’t have to. The same blood that runs through Jim Morrison, Patti Smith and Jeffrey Lee runs through Honey.

Honey are Sarah Marie Tyrell on guitar and vocals, Sammy Downing on drums and Ele Lucas on bass. They hail from St Austell. Their logo is designed like the Hollywood sign and photographs of them look like they’re stepping out of the Whiskey A Go Go on the LA strip or lurking around disused train lines in California, waiting for a train to take them somewhere, anywhere. But in the background the car isn’t a Cadillac or Mustang, it’s a little foreign number. Honey take Americana and the grunge of Nirvana and mould it with their own sensibilities. Rock has always been the universal language of the young and it doesn’t matter where you were born, every town has the wrong side of the tracks.

The album was recorded and mixed in less than five days by John Cornfield (Muse, Oasis, New Model Army) and it shows. It blisters with energy and urgency. The opening track, Weekend Millionaire, bursts through the speakers at full throttle, barely letting up. If singles still mattered then this should be one. 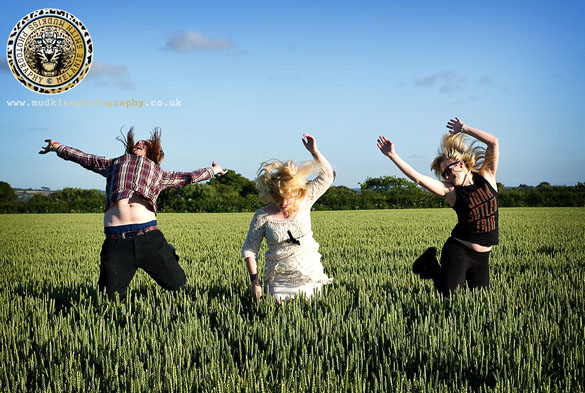 The second track, Celestial Burial, is like Mazzy Star on (more) acid if they had gone heavy. It’s psychedelia, conjuring up bleak landscapes and desert blues. Honey went out into the desert and came back with this song, given them by the spirits of dead rock gods. It’s a song of American landscapes, infused with Cornish sensibilities.

The third track is Deviant. Tyrell screams like a banshee, channelling Lydia Lunch and Kurt Cobain. This is tribal rock, reminiscent of Death Cult before The Cult.

Things slow a little with Coffin Womb, allowing the band to show that slowing things up doesn’t mean a slackening of energy and letting Tyrell show that she has a good vocal range as well as being a clever lyricist.

So the tracks tumble into each other. Gibson Girl with its punk anthem of I’m So Bored! Rapunzel, with a staccato rhythm that the vocals rise above. Am F and Ele’s Song are great little numbers that add a pop slant to the rock, reminiscent of The Stranglers, Siouxsie and Wire. Then, just as we think the pace may have slackened a little, we get Feral.

Feral is a wild, head banging number. There’s no restraint here and like a wild horse running free it’s blistering rock ‘n’ roll as it should be.

Black Teeth follows, almost an epic at 4:40 minutes with an ominous bass scorched over with razor guitar chords and a backbeat that rattles your eyes and jangles your spine.

And then, after 30 minutes, it’s all over. You remember to breathe and then hit play again.

I’ve heard a lot of great music over the last few years but I haven’t felt so excited about a new band for a long time. Honey are the real deal. Tyrrell’s vocals are mature with a gravelly innocence, her voice screams and urges on like a voice in the wilderness, arching across the rumbling bass, insistent guitar and driving multilayered drum beat. Her guitar work veers between manic strumming and textured solos while Lucas’s bass is growling and dirty like all good basses should be and tight in the rhythm. Downing’s drums are the icing on the cake. A lot of rock drummers just bash as loud as they can but he can hit the skins as hard as anyone but he adds finesse to his patterns that delight on repeated listening, and adds interest to the rhythms.

This should be blasting out of bedrooms up and down the country. As Honey would have it: sit on the sound and wriggle around!

All words by Mark Ray. More writing by Mark on Louder Than War can be found at his author archive. And he can be found on Twitter.