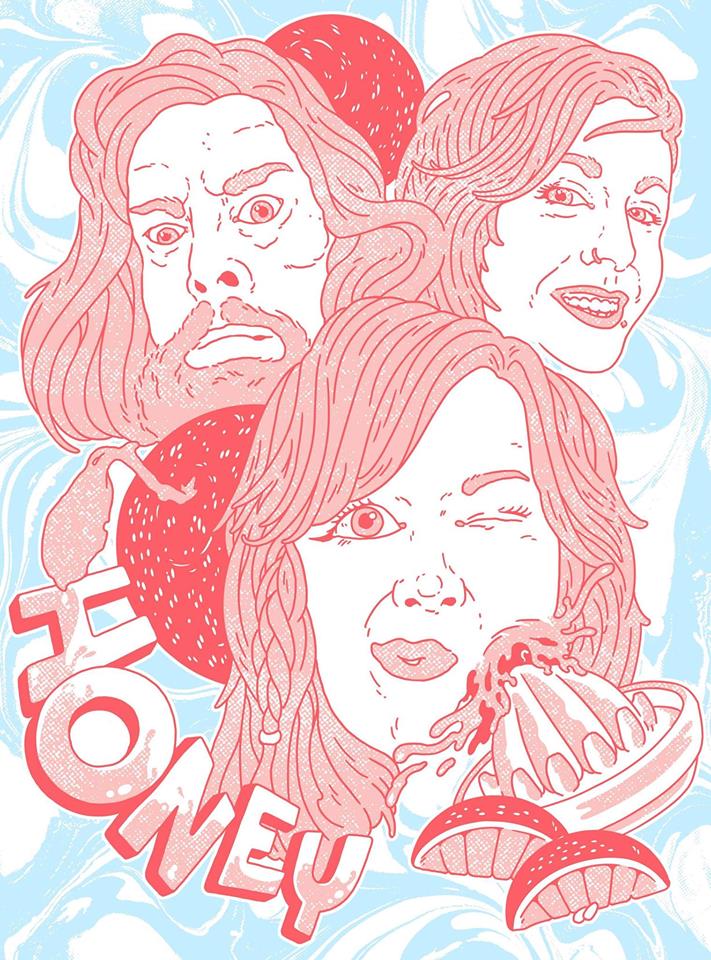 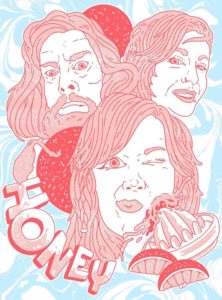 Lead singer Sarah Marie Tyrrell has announced that Honey, those grunge hard rocking alternative noisemakers from Cornwall, will be splitting up at the end of the year. The trio released their debut album, Weekend Millionaire, in 2015 to much critical acclaim, including a rave review from ourselves. There was much anticipation for their expected sophomore album but, sadly, this is now not to be; though it has been announced that there will be a final EP to look forward to and a final gig on December 1st at St Austell Brewery, which should be a joyous invocation of all that is great about Honey as well as, no doubt, a few tears mixed in the salty sea air.

Enjoy a taster of the EP to come, which we will review in due course on Louder Than War:

Here at Louder Than War we thank Honey for some great tunes and wish them all the best in whatever musical endeavours they pursue now.

After nearly 8 years of playing in Honey, it’s now time for me close this huge chapter of my life.

We still have a few dates left, some new music to put out and a final farewell show to announce! So keep your eyes peeled.

It’s quite an emotional time but I have tried to condense almost 8 amazing, whirlwind years into a few paragraphs below…

I started the band in 2011. Wild horses were charging out of me and I was compelled to write, perform and record these songs. I thank the members who gave me their time at the start. Dave Jones (I’m so sorry I was a dick to a sweet person). Key, and Craig Morris. Total. Legends.

We finally hit a solid line up when Ele and Sammy joined in about 2012. Ele absolutely elevated the band and made it what it is. It is as much her baby as it is mine. Her strong, pure voice and harmonies are an intrinsic part of the band’s sound. She is a world class performer and one of my best friends. Her gravity-defying stage moves have made her a standout feature of all live performances. She could pretty much walk into any band right now (and make it better). It is the thought of not playing with you every weekend anymore that makes me saddest.

Ele, Sammy and I had such beautiful, exhilarating, and hilarious times together! I cannot count the miles and I could not add up the hours we gave this group. I have such fond memories that I’ll cherish always… Being so deliriously tired that we’re hysterically screaming with laughter at Cribbs Causeway after sleeping in the car. Travelling to France and meeting the most beautiful, rad and hospitable dudes ever. Philosophical and completely dumb conversations for hours. Singing and rapping in the car. So many silly anecdotes. Hundreds of gigs meeting countless kind, talented and interesting people, many of whom we now call close friends. A 10 track album recorded in 5 days with the legendary John Cornfield.

After a few magic years Sammy needed something that fit him better as a player and person, as well as having personal stuff to work through. We will always be so thankful for the innumerable hours and amazing effort you gave us. Catching a bus followed by a train every week to practice whilst carrying all of your drum shit… Unbelievable commitment. You’re an amazing musician and a sweet guy. Reconnecting with you this year has been so wonderful!

Following Sammy’s departure we were blessed by Matt Davy who played the gigs we had while we were in drummer limbo. I don’t even recall practicing with him. He didn’t need to. Nailed it. Matt is another person who has given us so much time. Whether it’s drumming for us, doing amazing live sound or getting us shamefully drunk and partying with us.

Finally (2016) we connected with Tyler and our band totally levelled up! Tyler brought in a completely new energy. He is pure, unabashed rock’n’roll to the core and such a sweet person! He has given the band exactly what it needed in its final three years… Animalistic drumming (and ridiculous humour). In this line up we have achieved so much and have created memories that will make me feel warm and fuzzy whenever I visit them. We toured with possibly the two coolest people on planet earth; Marc & Gina of Long Holiday. That tour was one of the best times of my life. We recorded our forthcoming EP of which I am proud. I will miss terribly all the fun. All the car journeys. All the gigs. All the catch phrases. All the service station meals. All the anecdotes. All the 3am stops at Taunton Deane services for a certain Mc treat. I could write a book.

I have been so happy during these years. What a journey. Anyone reading this who is in a band will know the pure joy of that tight camaraderie which comes with it. Then why finish it? While I’m so happy on that level, I have become creatively restless and unhappy. I’m now ready to do something different. I also just cannot commit to a full time band at the moment. Life is too short and time is too precious to persevere with anything that you’re not 100% passionate about. I think it’s a good skill to end something at the right moment… My gut tells me this is it.

We couldn’t be more grateful to the literally hundreds of you who have helped us. I was going to name all the legends but there are so many and I would hate to forget anyone, I hope to someday let you all know what you have done for me and for us. We’re so thankful to the venues, the promoters, the radio presenters, the photographers, the writers, reviewers, the people who gave us space to practice, the bands we played with, the videographers, the pub/ venue landlords, the people who put us up for the night, anyone who made us a cup of tea at any point, the people who watched us, cheered for us, wished us well, people who bought merch, our beloved dear friends, the stage managers, the sound men and women, 90 % of the people I know I have met through music….! Many of you will have no idea how much I bloody love you.

Before doing anything new it’s time for me to have a break, during which I’ll be writing and relaxing. I’ll also be trying to have some sort of social life (including coming to YOUR gigs!) and above all else spending much more time with my daughter and my sweetheart Sam.

Sam who has been my biggest supporter. He’s always there for advice. He praises my songwriting which makes me dizzyingly happy. He has recorded us. He has helped me make demos. He drove Honey and Long Holiday all the way to Germany! He has played on our forthcoming recordings. He has shared a stage with us. My inspiration and love. (My King of California). He has been there all along, cheering me on.

I look forward to Ele and Tyler’s musical futures; I’m sure they’ll both have awesome things to show us all!! It’s going to be very strange not being on stage with them every weekend. I love you both. Let’s smash these last gigs!

Thank you for reading! Continue to push yourself. Follow your heart and flourish by pursuing what you love. Music is life. Life is love.