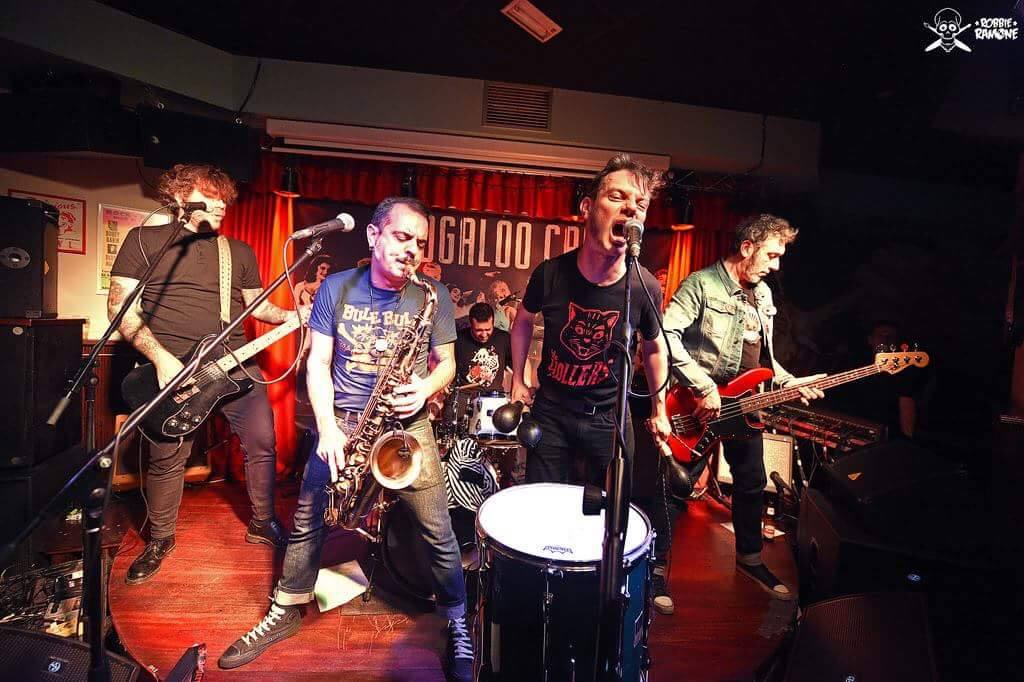 From the Cantabrian mountains to the Costa del Sol, there’s a beating pulse of underground rock ‘n’ roll surging through Spain and spitting out some of Europe’s most exciting garage and punk bands. Louder Than War dives into the secret jewel in Europe’s rock ‘n’ roll crown to check out some of the best bands it has to offer, find out why it has become one of the most sought-after destinations for rock ‘n’ roll bands around the world, and if the Spanish underground is still rising. 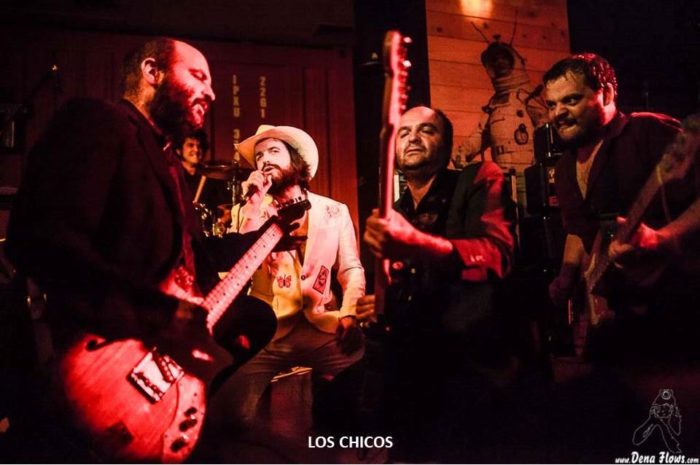 At the end of the 70s there was an explosion of punk rock across Spain. Bands like Eskorbuto, Siniestro Total, and La Polla Records shot out of alienated communities and brought and a rock ‘n’ roll attitude and nihilism that were once violently clamped down on to the streets. Their influence spread wide across the country. As freedom spread, the scene grew and through the 80s, bands like The Pleasure Fuckers and Sex Museum (the latter of which still play regularly today) took up the mantle and ran, passing it on in the 90s to the likes of Señor No and Nuevo Catecismo Católico. The once confrontational and anarchic themes had given way to pure rock ‘n’ roll abandon, opportunities for people to come together in sweat-filled celebrations.

Today, across the country there is a network of bands, labels, promoters, and festivals that showcase the pulsating energy of the underground. Most of the bands are not in it to make it, but rather to continue injecting high-energy doses of adrenalin into a scene that rarely raises its head above the parapet into the mainstream. This attitude has made Spain a go-to destination for rock ‘n’ roll bands from around the globe. It’s a country they know will embrace them, drag them into the pit, and be there for them the next time they come around. Even the rock ‘n’ roll glitterati know, as Bruce Springteen recently told Arcade Fire: “Just make sure that you can always play shows in Spain. Because there will come a time when people hate you for like a decade and you can just disappear and go play shows in Spain where people love you. And you’ll be in Spain, and you can eat delicious food.” 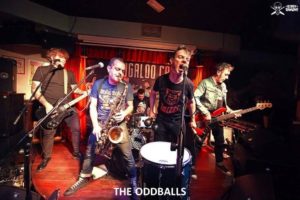 Every scene needs a beating heart, one that spreads its veins out to all corners of the country. Right now, one such heart is FOLC Records. Set up by Gerardo Urchaga of Los Chicos (the label name an acronym for Friends Of Los Chicos), the label has no agenda other than to help promote some of the best bands currently whipping up a stir in the venues and festivals across the country. Their roster and grip stretches from corner to corner of the country; from Galician gonzo-punk partiers Terbutalina to Valencia’s trash rockers Aullido Atómico, from Donostia’s good-time rollers Lie Detectors to Malaga’s spikey groove punks The Oddballs.

Spreading further, FOLC have also put out records by Javier Escobedo (The Zeros), the Tripwires (featuring member of Mudhoney) and a smattering of bands from the UK scene like King Salami & The Cumberland 3, MFC Chicken, and The Fuzillis, bands that share the passion not just for playing concerts, but for making every gig a party. That’s what Spain is all about.

“The level of the groups is really high” says Gerardo. “Amazing groups in almost all styles. I get a lot of emails from groups sending me their recordings and there’s a lot out there to get to know. It gives me quite a bit of hope for the future. It’s not to set off fireworks, but five years ago the scene was worse. Today I see a tendency towards the renovation of the scene with more young people at the concerts and music bars. They’re a great school.” It’s true that much of the rock ‘n’ roll scene is dominated more by the old guard, bands that have been playing now for fifteen, twenty years, but there are lots of new bands breaking through thanks to the organic support structure that has grown over the last thirty years, in many ways thanks to the bands themselves. 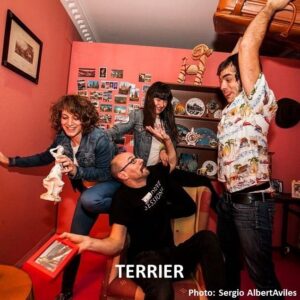 Of course, as the capital city, Madrid is a hub of activity and home to lo-fi garage band Terrier, soul-blues outfit The Government, new noiseniks Favx, and Hollywood Sinners from nearby Toledo, who returned at the start of the year after a seven-year hiatus. Tony DevilDog, head honcho at Madrid-based Family Spree Recordings (home to King Cayman, Las Señoritas Estrechas, and The Loud Residents) continues. “I’m constantly at a crossroads of choosing between so many different options and always with the feeling that I’m missing out on many interesting things. There’s a massive amount on offer, an enthusiastic public and everything else that surrounds it, the weather, the food, the party, adds more appeal.”

American powerpop singer Kurt Baker, who after touring Spain every summer for seven years with his band The Leftovers finally upped sticks and moved to Madrid, talks of its allure. “(In 2013) I was looking to take my career in a different direction and had gotten jaded on the horrible grind that it can be in the States. From the very get go it was clear that Spain was a country where people enjoyed a good time and loved great music. All the while, great food and usually wonderful weather.” And in terms of the quantity and quality of local, national and international bands that are constantly passing through, he simple states that “Being here in Spain is sometimes like a rock ‘n’ roll paradise.” An oasis in the desert it certainly is.

Madrid may be the go-to city for the big international names that come through, that and Barcelona, home to DIY punk label BCore Disc, whose roster includes Futuro Terror and the wonderfully monikered Tokyo Sex Destruction, but they are far from the be all and end all for those coming up. From the mountainous region of Cantabria in the north of the country come bands like Los Tupper with their psych-inflected rolling rock and powerpop garageheads The Pulsebeats, amongst such an amount of bands coming from the small region that you’d get dizzy trying to keep track. And from the other end, off the mainland from the Canary Islands, Texxcoco, who lit up the infamous Fuzzville festival two years ago with their stripped back riotous garage rock. 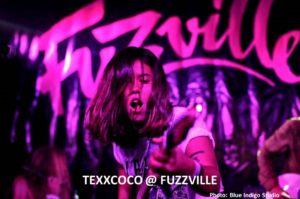 Fuzzville festival, Funtastic Dracula Carnival and Purple Weekend are the major festivals of the season. Previous editions have played host to the likes of the The Buzzcocks, The Undertones, New Bomb Turks, Redd Kross, Detroit Cobras, King Khan, and this year Funtastic will see Radio Birdman headline. This year’s Motorbeach festival in the northern community of Asturias saw Slade and Wilco Johnson headline, as well as sets from The Rezillos and a whole host of European garage-rock. This draw of international bands and the sheer quantity and quality of lesser-known national and international acts means that the festivals almost always sell out, bringing people from all over the world to soak up the atmosphere. And it’s not just these bigger festivals that unite the scene. Throughout the year smaller festivals all over the country continue to bring the bands together and forge unities that they take with them. From Santander’s Action Weekend to Tarragona’s Bule Bule Toga Fest (where bands and punters alike go dressed in Roman togas), Bilbao’s Fuzz In The City to Seville’s Monkey Week and many more in between, the artists and organisers support each other to create a diverse and continuously blossoming scene.

However, it’s not just from within the Spanish underground scene where support comes from. One of the country’s best national public radio stations, Radio 3, plays host to various shows including Capitan Demo (which showcases many unsigned bands) and El Sotano, the most prestigious and well-known rock ‘n’ roll show in Spain. Radio 3 also host concerts on national TV where signed and unsigned bands, household names and up-and-coming acts are able to perform full concerts before a studio audience and then have them broadcast in full. It’s a medium that has helped break bands like Muse in the country, as well as supporting a plethora of much lesser-known names. This year alone has seen concerts by Aullido Atómico, Valencian post-hardcore rockers Cuello, and Basque/Cantabrian cowboy punks Dead Bronco amongst many others.

Although some may see clouds on the horizon, there are still cracks of glorious sunshine breaking through them for the bands coming up. Over the last 40 years Spain has silently become one of the most rock ‘n’ roll destinations in Europe. The bands may struggle to break out onto the international stage in the way that their Scandinavian counterparts more often do, but it seems that there’s little stopping the country from cementing its rock ‘n’ roll pedigree. ¡Que viva España!

Check out a selection of Spanish underground rock ‘n’ roll in the playlist below.