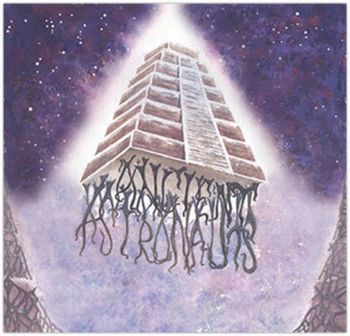 The long awaited follow-up to 2012’s mini-album ‘Earth Measures’ from this Glasgow 3-piece.

Unfortunately I reviewed this release from the CD version, it’s not unfortunate in respect of the sound quality, it’s just that this is a sonically vast album, a kaleidoscope of dark titanic riffs, and powerhouse drumming that would have been better suited to a double vinyl gatefold sleeve edition such are the feelings of expanse and panoramas Holy Mountain evoke…the artwork itself hints at this; a pyramid bathed in celestial light traversing space and no doubt time – this fascination with all things cosmic and metaphysical reinforces the assertion that this album is a much more grandiose beast than I expected from a perceived ‘stoner’ band.

Opener ‘LV-42666’ sets the tone and shatters the stoner rock illusion beneath titanic beats and cavernous bass, couple this with distorted vocals not dissimilar to those employed by Iceland’s Dead Skeletons and its clear Holy Mountain are venturing into dark twisted psychedelia…’Luftwizard’ is reaching back in time, complete with weirdly engaging tempo-shifts that will appeal to acid casualties as well as modern consumers of noise…’Ancient Astronauts’ opens up and allows the instrumentation to develop before enveloping you in shattering bass – I immediately thought of both Sabbath and Evil Blizzard such is the power and relevance of this track; just allow yourself to absorb the ‘Star Kings’ riff, the dual vocal chant which then gives way to further time changes…

A blisteringly inventive release, equally savage and laconic though with enough reference points to draw the casual listener into Holy Mountain’ cosmic world.