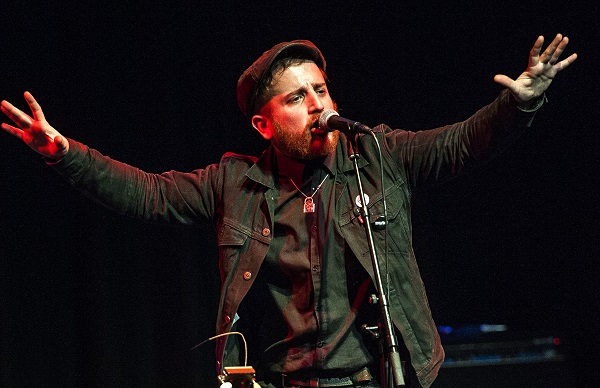 Buoyed by the release of a classy new album in the form of Take A Bite, we headed down to Manchester’s Northern Quarter to hook up with the jamboree that is Holy Moly & The Crackers at a sold-out Band On The Wall.

The six piece find themselves returning to the area for the third time in the space of eight months, having whetted the appetite of the uninitiated with a scene-stealing performance at the Head For The Hills Festival before headlining the Deaf Institute later in 2018. However, the  Band On The Wall is a much more suitable venue for them (as Conrad Bird explains in a pre-gig chat – see below) with its up close and personal vibe.

A band that often get tagged with the ‘folk’ label, it may be more a case of folk at the front (there’s a fiddle and Squeezebox Rosie throwing all sort of shapes with her accordion) and rock (guitar, bass and drums) at the back. However they line up, and it’s with Ruth Patterson currently taking front and centre, there’s a party going on down at Holy Moly central. Bathed in deep red light, like a plush vaudeville party, the folk tag gets liberally sprayed with and twisted into, a jamboree of soul, funk, swing and punk and maybe more.

Of course, they delight in showing off their new music – All I Got Is You and Upside Down book the main set – and Take A Bite is an impressive new record that, like all of the HM catalogue, comes to vibrant life onstage. With both on and offstage tightly packed, the six-piece swing through Sister and a sleazy Sugar before a  mid-set trio of new songs came balanced by a titanic party time trio. Set up by the wild Eastern Euro-gypsy stomp of River Neva and A Punk Called Peter comese their ‘hit’ – the funky Cold Comfort Lane, the song that shot the band briefly into the mainstream. A breathless sequence that even has Ruth sweating.  A mighty triumph, the Band On The Wall is taken and Holy Moly & The Crackers may have found their new home from home in Manchester.

Chatting pre-gig with Conrad Bird over a fag and a drink, what’s really obvious is the fact that he seems to know everyone coming to the gig as the fans pour in. It’s a sign of a band that is totally at home on the road and performing onstage. Ticking off a number of subjects here are the thoughts of Chairman Bird on:

Meeting the fans: For me, I never planned to be in a band or ever have and visions of being where we are now. I’m just a music lover so when people come to the shows the best thing is getting to meet new people, and I always feel a bit pleased but surprised that they get what we’re doing – so we’ve got something in common so why shouldn’t you get to know each other.

The university touring circuit: The music scene seemed so big but now maybe students aren’t a live music market – they just go to the clubs – so that live music hotspot isn’t as strong any more, even though we met and started the band at university!

Playing Lost Evenings with Frank Turner: We played one of the smaller stages but he’d been to see our show a few months earlier as one of his friends does design for us so brought a mate along – and it was Frank Turner. We put on such a chaotic show but as he’s so big we could see him right at the back. He’s such an advocator of young bands. There’s so many of his stature that don’t give a fuck as they’re so busy. Even at our level, all my time is taken up with the band.

The mystique of being a musician: Frank’s one of those guys who makes himself so available to audiences; people just aren’t interested in mysterious rock stars any more. They want to know the person – it’s maybe a symptom of the ‘everyone wants to be their own celebrity’ way of the media – it’s more about real people. The two videos we made for the album, the one for All I Want Is You was just us pissing about being us and we got the edit back and thought we looked daft but people loved it. The next one we did was us in a warehouse pretending to be cool. The edit of that I thought was great but people didn’t like it as much as it wasn’t as ‘real’. Back in the day, it was more about the mysterious but now it’s now a bad thing….

Touring with Skinny Lister: The thing that really got me was getting to hang out with them as we’ve known each other a long time but never really been in the same place long enough. It was also weird as I was a fan of theirs before we did this band so I had to keep things in check rather than being a crazy fan. Getting to a point where we could work with them was a milestone for me but also we pride ourselves on our live show and doing quite a good one. Watching Skinny, it was like we had a lot to learn. We did this tour, got back on the ferry from Amsterdam on Monday and the next day we were in the rehearsal room consolidating what we’d learned. Working with people that inspire you to get better is so important.

Venue accessibility for artists: Last time in Manchester at the Deaf Institute was sold out and the show was amazing but the problem there is it’s so inaccessible and that’s a problem you can have at a lot of venues and we’re just starting to face it head-on. Ruth is in her wheelchair but we were hauling her up and down stairs so working around the logistics meant that although we had a great show it was quite sad that it might not be one we’d do again. For years we’ve sucked it up and made everything work, but at the point we’re at now we’ve realised there’s a bit of longevity and we have to start looking more at these things. Band On The Wall won an award for accessibility so we wanted to come here – they have a lift down and it’s easy in.

There’s a big conversation going on for accessibility for audiences in music venues but people don’t expect artists to be disabled or have access issues. Ruth’s trying to be a part of that. As well as front of house, you need to think about backstage so it means anyone with any disability can feel they can do it. There are so many great venues with some history attached to them that we’d love to play and hopefully if we stand the ground – and I’m not blaming venues at all – but if the conversation is there…

Donkeys: You should get Ruth and Tommy (both big lovers of the donkey… allegedly) who both sit in the front of the van and it’s like a David Attenborough documentary going on. We had to break from the Skinny tour to do a couple of dates in Ireland of our own. We hired a van to drive down to Kerry and there were so many donkeys…

Living by the sea: I’m a big sea life fan. My big dream is to live by the sea and be a fisherman. Get rich enough from this, which will never happen, to never have to work again and go up to Scotland with my fishing rods and my whisky. There’s something about the water and the sea that’s therapeutic. I did a big dissertation about the connection and the pull of the ocean. We’re very connected to the sea- maybe if you believe in evolution it may be where we came from.

Folk Music: It may be from that idea that I got into folk music, which is before I got into any rock and roll and all those old songs about fishing from Martin Carthy and the Watersons completely inspired me. The first songs I wrote – which NO-ONE will ever see or hear  – were based on that ilk.

Naked In Budapest – the song: It was quite a lot of things. We got booked in Hungary and stopped off in Budapest. It was the first time we’d seen the Danube and obviously, we’d been doing the song The Devil In The Danube since we started so it felt very spiritual. Then there was this drink that was the local grappa,  like firewater, and we all got very drunk. Tommy just loves getting his kit off and that happened, which actually happens quite a lot, but it was just being in Budapest at this amazing festival and then onto another festival, which was the biggest show we’d ever played with 7000 people. That whole experience and the “we’re not going home” line was how it all started – really something special.

All words and live photography from the 2018 Holy Moly archive (please don’t use without permission) by Mike Ainscoe. You can find more of Mike’s writing on Louder Than War at his author’s archive. He can be found on Facebook and is currently revamping his website…