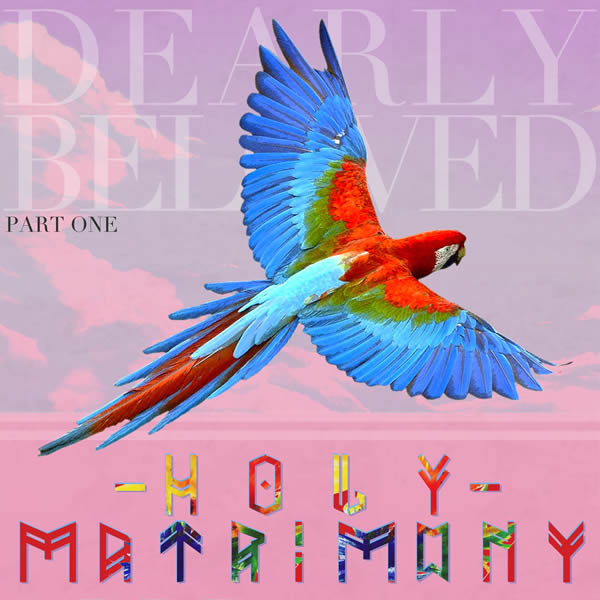 Holy Matrimony are an unashamed pop-synth band from Merseyside, now working out of Manchester. Their new E.P. Dearly Beloved: Part One comes out at the end of this month and they are playing a number of dates around the North to support it.

I first caught them on the bill with New York Tourists at Gullivers last year and since then they have grown in confidence, writing new tunes and honing their craft. This new release sees them reach a creative peak in terms of songwriting and delivery.

Falling somewhere between 80’s band, Ultravox and modern day Chvrches via The XX they have an uncanny knack of producing huge sing-along melodies that take you on a sublime, convoluted journey. With this trio you get the whole shebang; swirling synths, infectious beats and Roger Damen’s soaring baritone vocals.

Opening track If You Can’t Love Yourself launches in typical Holy Matrimony style, but it just doesn’t go where you expect. Building verse upon verse it crashes in to the sweetest little chorus you’ve ever heard. This is what defines HM songs; enormous soundscapes, taking you on a magic carpet ride before dropping you, sated, just short of where you expect. Just brilliant.

Dearly Beloved follows and smacks you in the face from the off. Deep, punchy and full of soul with a huge hook and by far the best track they have ever produced. The EP closes with Finer Things and the beautiful Dulcimer.

I had hoped for something really special from the band with their second release and I wasn’t disappointed. Go and see them; they’re playing The Castle, Manchester on 31 March. See them before some record company comes along and tries to knock all the edges off!

All words by Nigel Carr©,  More writing by Nigel on Louder Than War can be found at his Author’s archive. You can find Nigel on Twitter and Facebook and his own Website