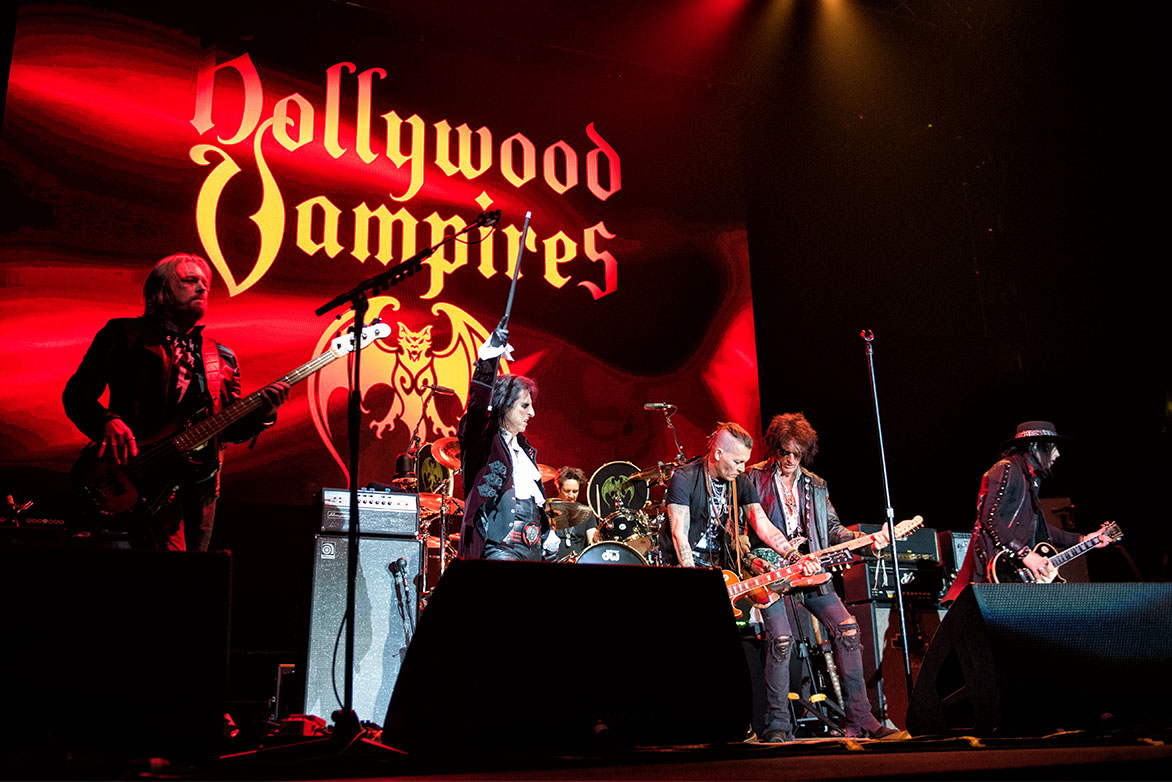 The Hollywood Vampires, today made up of Alice Cooper, Joe Perry and Johnny Depp originated in the 1970s on the Sunset Strip at the Rainbow Bar & Grill’s upstairs bar. A gathering place for the rock stars living in or passing through L.A. “To join the club, one simply had to out drink all of the members,” says Cooper, a founding member of the original Vampires. This boys club has now merged into this star-studded tribute to the rock n roll spirit so Louder Than War sent Melanie Smith (photos) and Katie Clare (words) to Manchester Arena to see how this accolade to past revelry went down.

Regardless; if you decide the Hollywood Vampires is a rich boys vanity project, is viable entertainment or even as a super-group you can’t say it doesn’t offer some decent bang for ya buck. Supported by not one but two bands prior to those Vampires; in total, the night exceeding 4 hours that went past fast.

The Damned were given a decent length set, they filled with authoritative gothic punk rock with just the right amount of showmanship and humour. Captain Sensible, overcoming some tech issues early on, delivered a masterclass in guitar playing. Creating a foundation on which much is built on all with his usual mischievous glee. Dave Vanian glides and swoops about the stage his sonorous vocals, dispensing songs several decades old yet sounding genuinely fresh. Highlights include Wait For The Blackout, Love Song, Standing on the Edge of Tomorrow and New Rose; oh damn it whom am I kidding the whole set was a highlight. 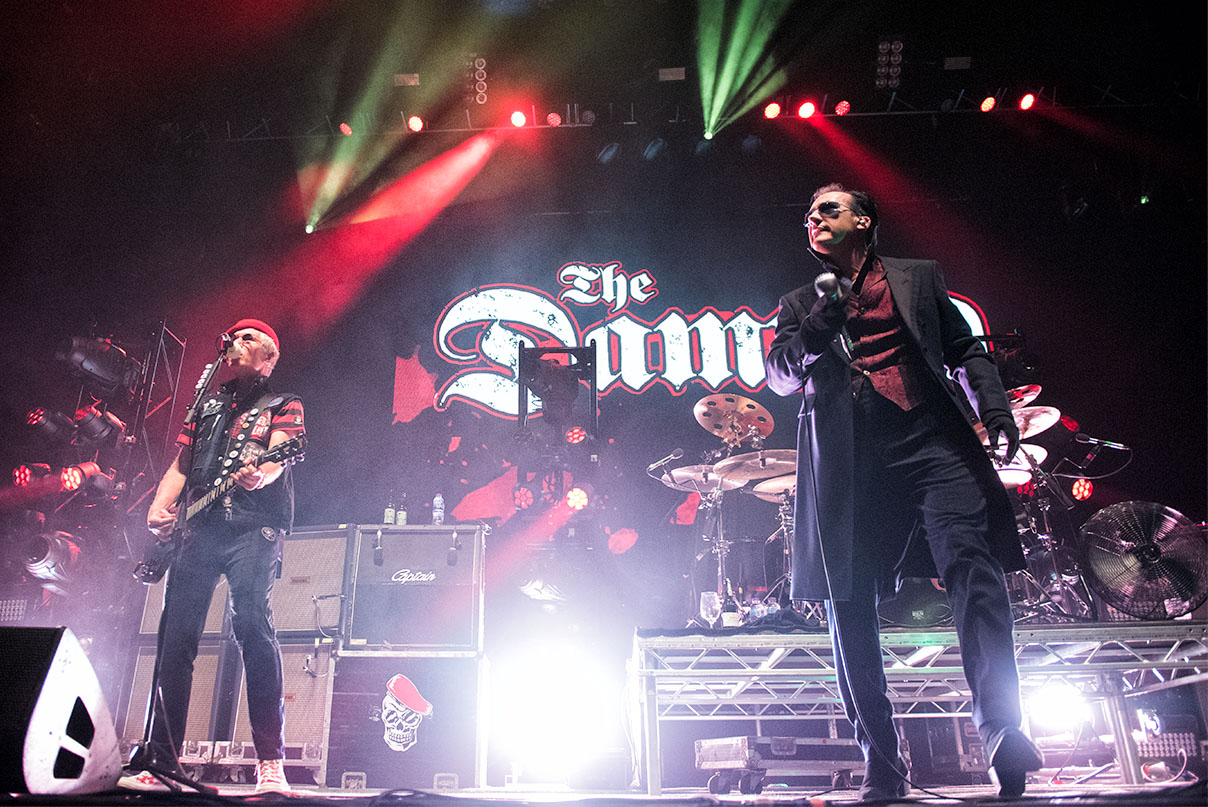 Then there is The Darkness, in advance thoughts were ‘not everything is for everyone’.  However, The Darkness, in fact, provided a  layered and persuasively matured performance than expected, well mostly.  Justin Hawkins was gregarious and convivial throughout providing between song laughs. You can’t fault him and the whole band’s ability to warm up an audience, their very obvious musical skills and the fact that their set had the audience invested throughout. 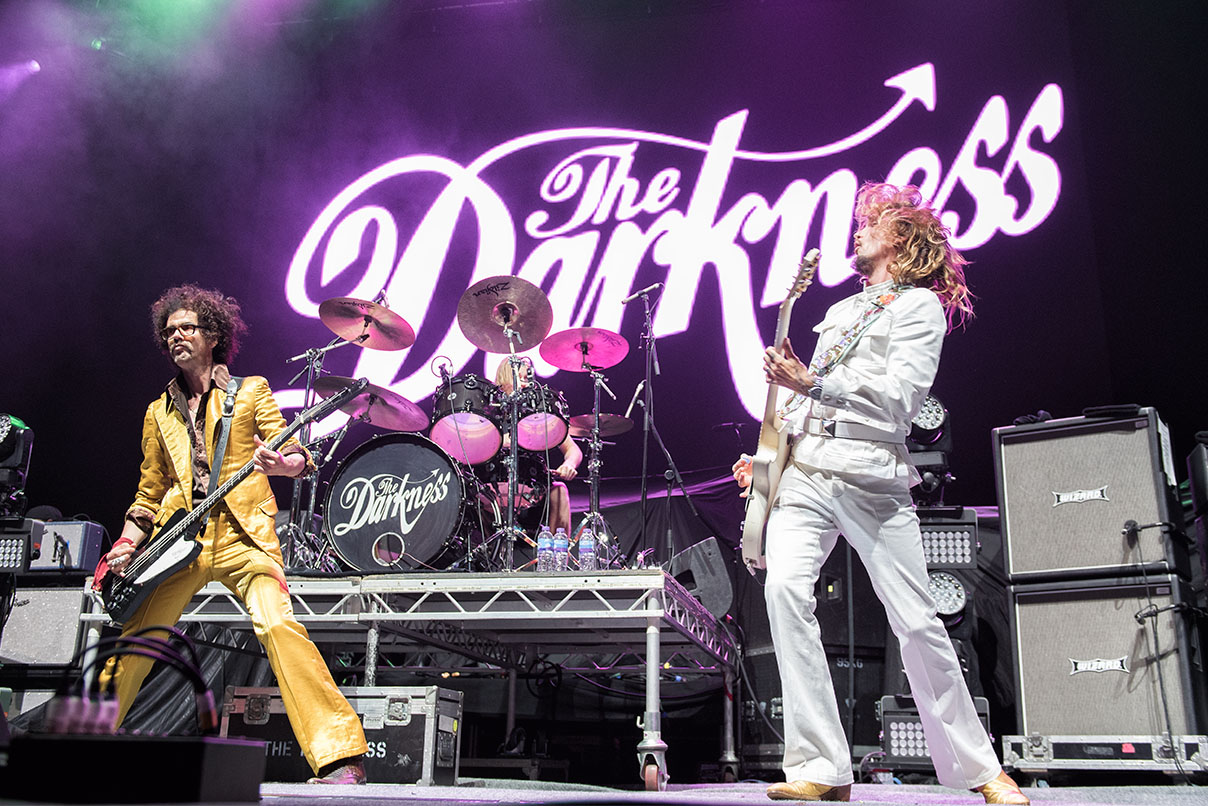 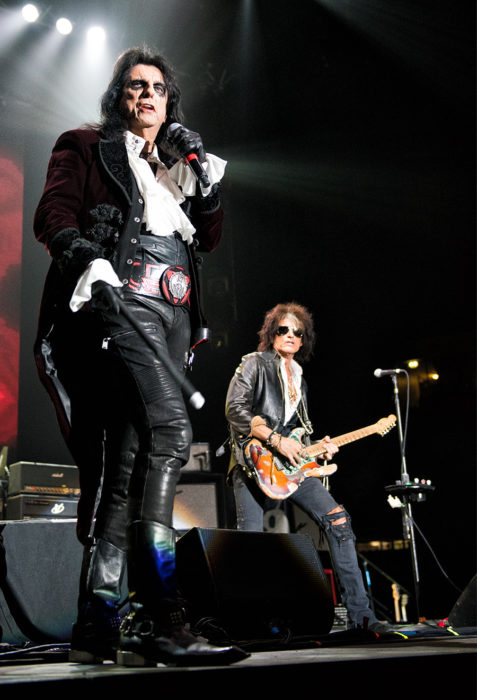 The build-up to the main act tonight is prolonged just a little bit. The light fades and then goes out and as they do the huge backdrop lights up as did the roar of the filled Manchester Arena. There isn’t any bluster as everyone on stage throws themselves straight into the fray with the bands’ original tracks.  I Want My Now, Raise the Dead and  My Dead Drunk Friends, the latter more pirate shanty than shock rock but it is all delivered without fault and with legitimate zest.

With bombastic levels of sound, it is impossible to determine Depp’s instrument proficiency, which has been the most asked post gig question, really this is not a show to be looking for nuance in anyone’s individual performance. That said Cooper’s vocal aptitude is individually separable from the almost ‘everybody else at once’ cacophony and Cooper himself seems to be the central pivot of Hollywood Vampires holding everything together; the leather-clad ringleader complete with top hat and whip. 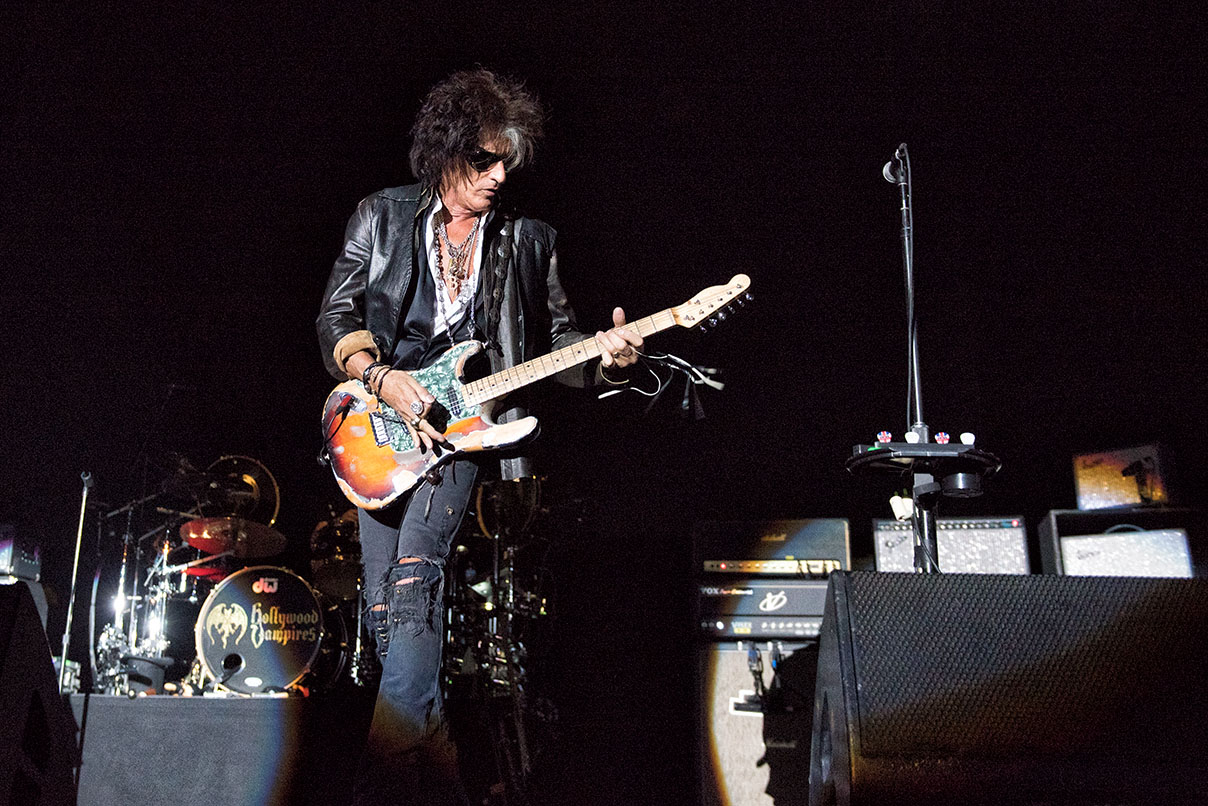 Performing with theatrical charisma Cooper never takes over or shadows anyone. Time and space are given to Joe Perry to deliver a certainly unique cover of Aerosmith’s Sweet Emotion and Depp to take on two tracks most notably Bowie’s Heroes which is delivered with engaging veneration.

As expected the set is a principally made up of covers and it’s a curious bunch which includes Love’s 7 and 7 Is, Motörhead’s Ace of Spades, David Bowie track Heroes’ as well as a merged version of The Door’s Five to One & Break On Through. It’s actually something of a macabre satire, covering the songs of the fatalities of their own excess or from poignant illnesses. As a premise, it may not seem such a delicious enterprise but I’d be surprised if Cooper and Depp don’t find it a little appealing and well it certainly plays into that vampirine aesthetic. 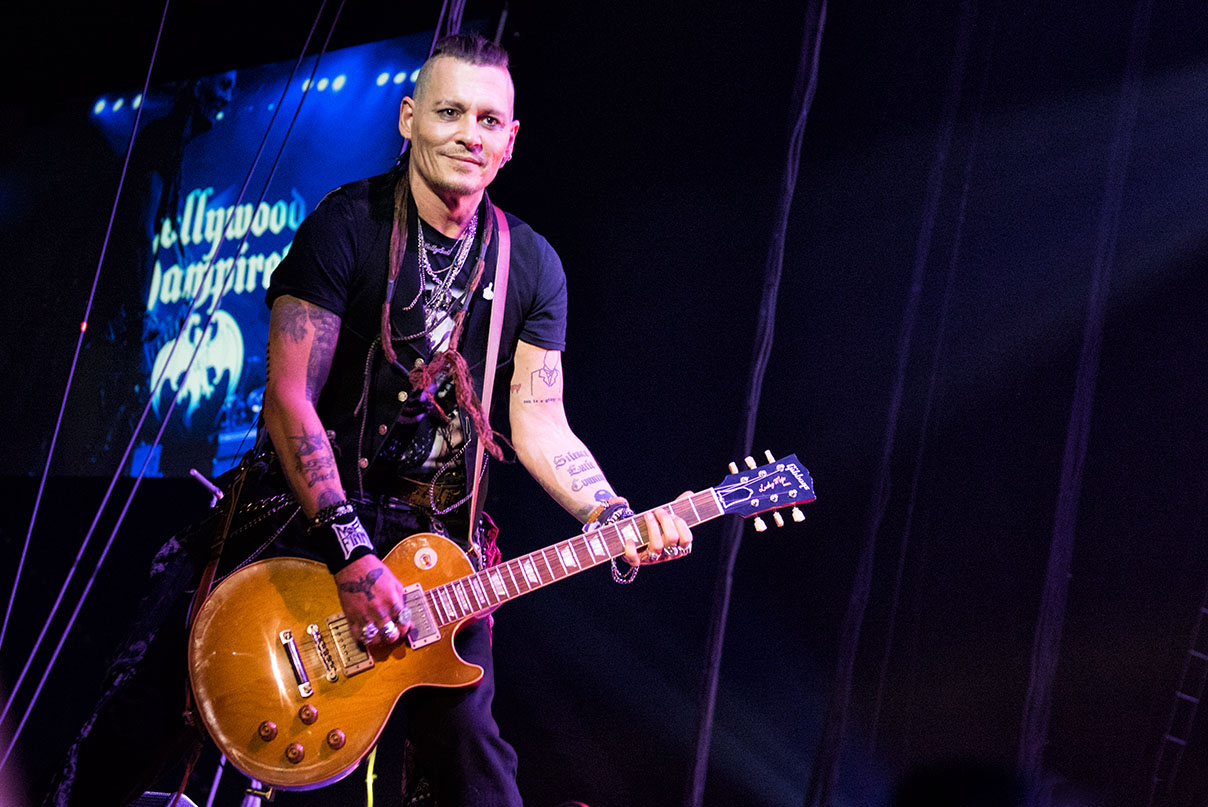 There is certainly nothing to indicate that anyone is not devoted and honestly participating in putting on a great show. This certainly makes for an intoxicating experience that is easy to get drawn up into. It would be so much easier to label Hollywood Vampires as some self-indulgence on the part of ageing rock stars and a movie heartthrob and honestly so what if it is. What is music – live music, in particular, all about? To entertain? To stir emotions? To provide an escape? Tonight we were taken an exhilarating, loud and fast-paced thrill ride through rock n rolls defiance, excesses and exuberance and it will be vividly remembered for quite some time.

Please note: Use of these images in any form is illegal. If you wish to contact Mel please email mel@mudkissphotography.co.uk

Tickets are on sale now from the usual ticket retailers including AEG Media.

Live Review by Katie Clare. More news, reviews and interviews by Katie on Louder Than War can be found at her Author’s Archive. Katie can also be found on Twitter where she tweets as @tokyo_katie. Also, Katie can now be found on Instagram as tokyo_katie_captures this new feed is devoted to captures from shows past and present.