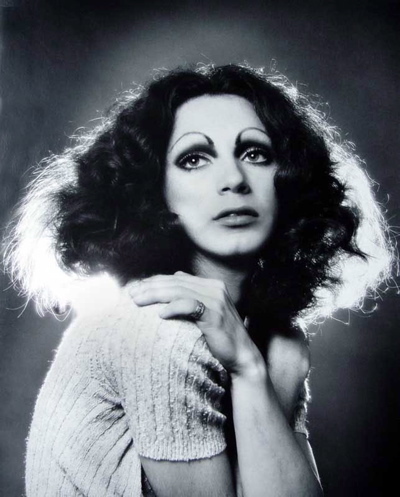 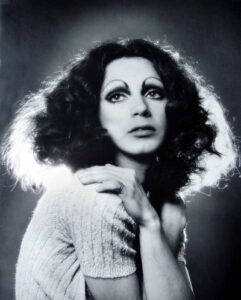 Holly Woodlawn, who has just died at 69, was one of the accidental icons of the seventies. A glimmer of fame and a name that flickered briefly and beautifully in the lights from a  time when everything was possible in pop culture, Holly willed herself to a transient and yet lasting fame and was the perfect reflection of the delicious possibilities of that decade.

The inspiration behind Lou Reed’s Walk On The Wild Side and also Frankie Goes To Hollywood singer Holly Johnson’s name her life reads like a song lyric. Haroldo Santiago Franceschi Rodriguez left home and hitchhiked to New York and walked into pop history as documented in Lou’s greatest lyric…

Now known as Holly Fernandez she come one of Andy Warhol’s ‘superstars’. Known for her role opposite Joe Dallesandro in the 1970 film Trash, her acting credits also included 1972’s Women in Revolt, 1998’s Billy’s Hollywood Screen Kiss , as well as various roles in cabaret. Holly was a product of the seventies – the photo celebrity culture where fame was the art form as she explained to the Guardian.

“I was very happy when I gradually became a Warhol superstar. I felt like Elizabeth Taylor!” Woodlawn told the Guardian in 2007 “Little did I realise that not only would there be no money, but that your star would flicker for two seconds and that was it. But it was worth it, the drugs, the parties, it was fabulous. You live in a hovel, walk up five flights, scraping the rent. And then at night you go to Max’s Kansas City where Mick Jagger and Fellini and everyone’s there in the back room. And when you walked in that room, you were a STAR!”