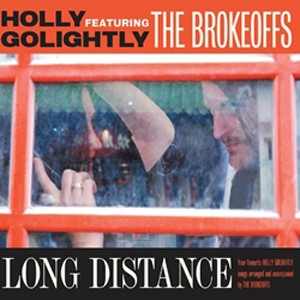 Holly Golightly has been around the music scene for nearly 20 years, releasing numerous albums as a solo artist, collaborating with others and more recently with her band The Brokeoffs. Off the radar of the major labels, she has managed to plough a furrow with a dedicated fanbase and a work rate that would put most other musicians to shame. ”ËœLong Distance’ is a new album only in name, as it contains re-recordings of songs from her solo output including covers of some of her favourite artists by popular request from her fans. Holly herself stated “I have picked some of my original band favourites and recorded this collection for old and new fans alike. The highlight for me was the chance to re-record ”Ëœ(You Ain’t) No Big Thing,’ the fantastic 1966 Sam and Dave classic that I first started performing live in 1995. It’s one of my all time top tunes, along with ”ËœMy Love Is,’ the fabulous Little Willie John number, which we’ve given a wistful lone banjo accompaniment this time around.”

Opening track ”ËœYou Ain’t No Big Thing, Baby’ is a cover of the 1966 Sam and Dave classic, and Holly gives it a classic 60s girl-group feel with her vocals. The Brokesoff’s backing is quite restrained in the style of the period. It’s the album’s highlight.

She goes back to her early 90s output for tracks such as ”ËœAn Eye For An Empty Heart’, ”ËœBlack Night’, ”ËœMother Earth’, ”ËœYour Love Is Mine’ and ”ËœMy Love Is’, which are reworked, both in terms of the tunes, but also in Holly’s delivery which is less direct than on the originals. It works well on the former two, but is less successful on the later three.

”ËœDear John’, from the 2004 album ”ËœSlowly But Surely’, and ”ËœBig Boss Man’ and ”ËœCome The Day’, from 1998’s ”ËœUp The Empire’ are more faithful re-recordings and see Holly singing with less intonation on her voice, which make them more accessible to those who haven’t fallen in love with her distinctive voice.

The concept of covering your own songs, including covering your own covers, is an unusual one. The whole album is marked by Holly’s vocals which will not be to everyone’s taste, but she brings a personality to her music that has gathered her a solid fan-base.

Holly continued “There is an even mix of cover songs and originals to revisit, all of them corkers in their own right and all of them especially dear to me. ”ËœLong Distance’ is collection of my good-time-foot-tappers and sing-along-tear-jerkers. It’s my top ten tracks prepared from scratch and served up fresh”

This album won’t win any new fans, and it didn’t convince me without making me dislike it, but will delight those that have followed her for years. And with that, it’s probably done exactly what Holly intended the record to do.