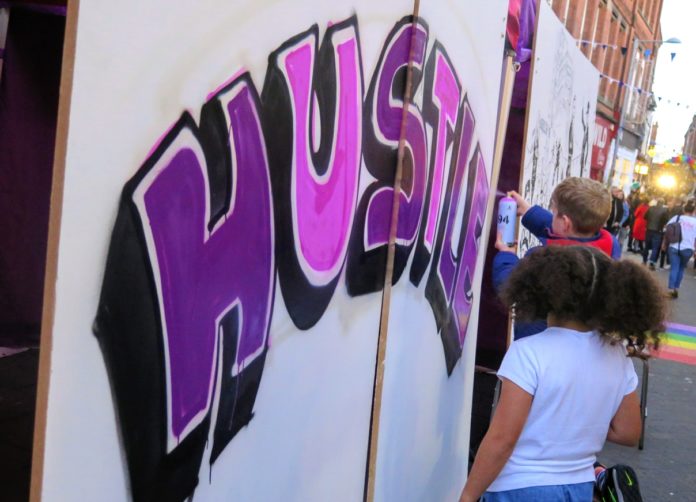 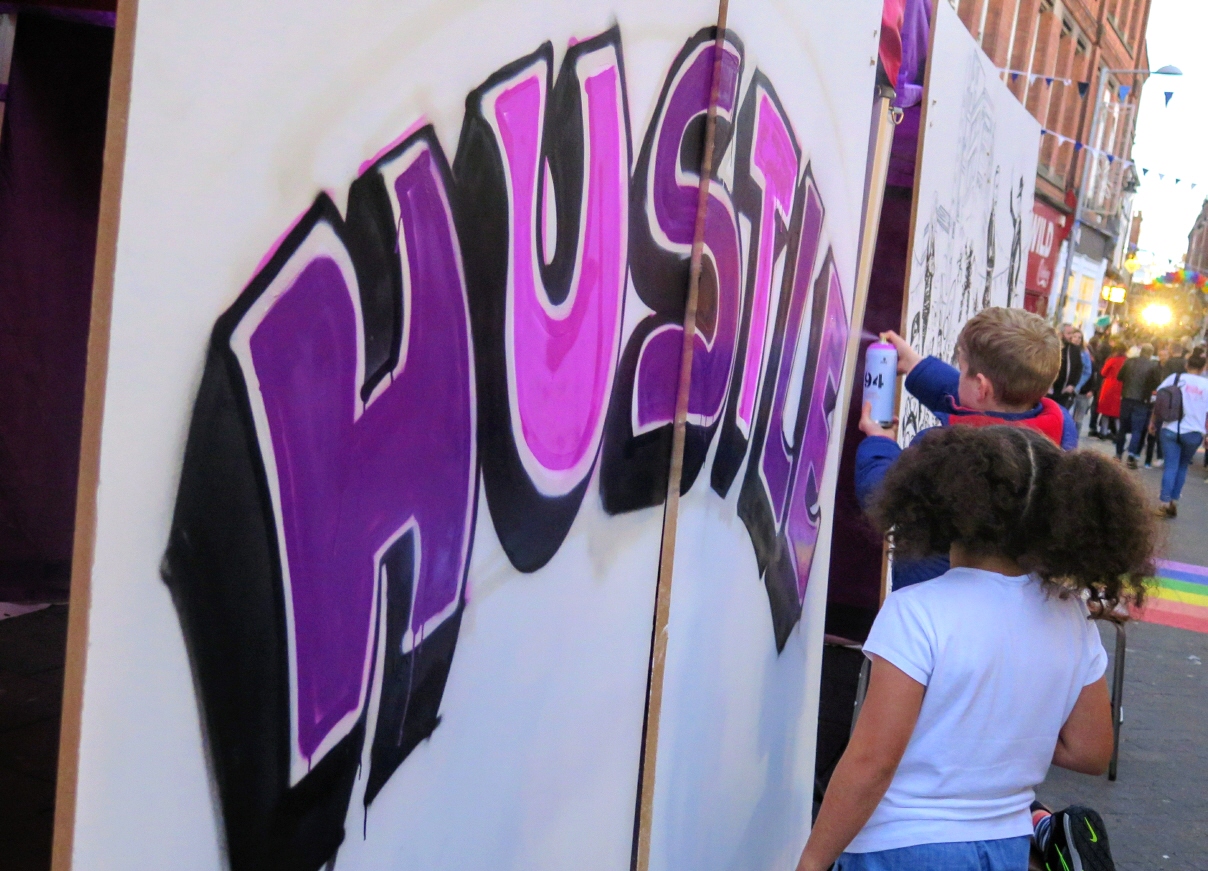 Nottingham’s one-day music and arts festival is a celebratory and charitable affair that goes some way to verify the city’s self-styled claim to be the UK’s friendliest city. Louderthanwar’s Christopher Lloyd popped along to check it out.

The first Hockley Hustle took place in 2006, and every year thereafter the event has grown in stature to become perhaps the friendliest festival in the UK. Held in over 30+ venues in the Hockley area of Nottingham, Hockley Hustle treats festival goers to around 300 gigs from bands whose musical styles range from acoustic folk, perverted electro pop, hardcore, metal, hip hop and everything in-between.

Away from the music there are also children’s workshops, ethical food traders, poetry, and a whole manner of activities that help create a fantastically eclectic and friendly atmosphere. The icing on the cake is that the whole festival is a charity fundraiser. Since its formation Hockley Hustle has raised over £150,000 for a wide range of Nottinghamshire charities including those that deal with homelessness, gender equality, mental health issues and much more.

Nottingham cites itself as Britain’s friendliest city and it’s hard to argue with that claim. Hockley Hustle itself reinforces that claim with a joyous event that is welcoming of all sorts of reveler, from children to pensioners, hipsters through to metalheads. Even with the vast majority of the gigs taking place in pubs, the atmosphere remains celebratory, with no drunkenly bad vibes or boorish behaviour evident at any point. Everybody’s modus operandi seems to be to have as much fun as possible.

With so many bands to see in such a short period of time the sensible way to treat the day was by looking at it as a magical mystery band a pub-crawl, where the prize isn’t so much alcoholic obliteration, as it is a musical lottery. You could very well find yourself discovering your favourite new band. Whilst the line-up was understandably heavy on local talent, it also featured international bands that popped in whilst on their current UK tours, all seemingly relishing the bizarre break in the conventional tour pattern by playing in strange corners of tiny rooms in front of appreciative audiences of equally befuddled and enthusiastic revelers. 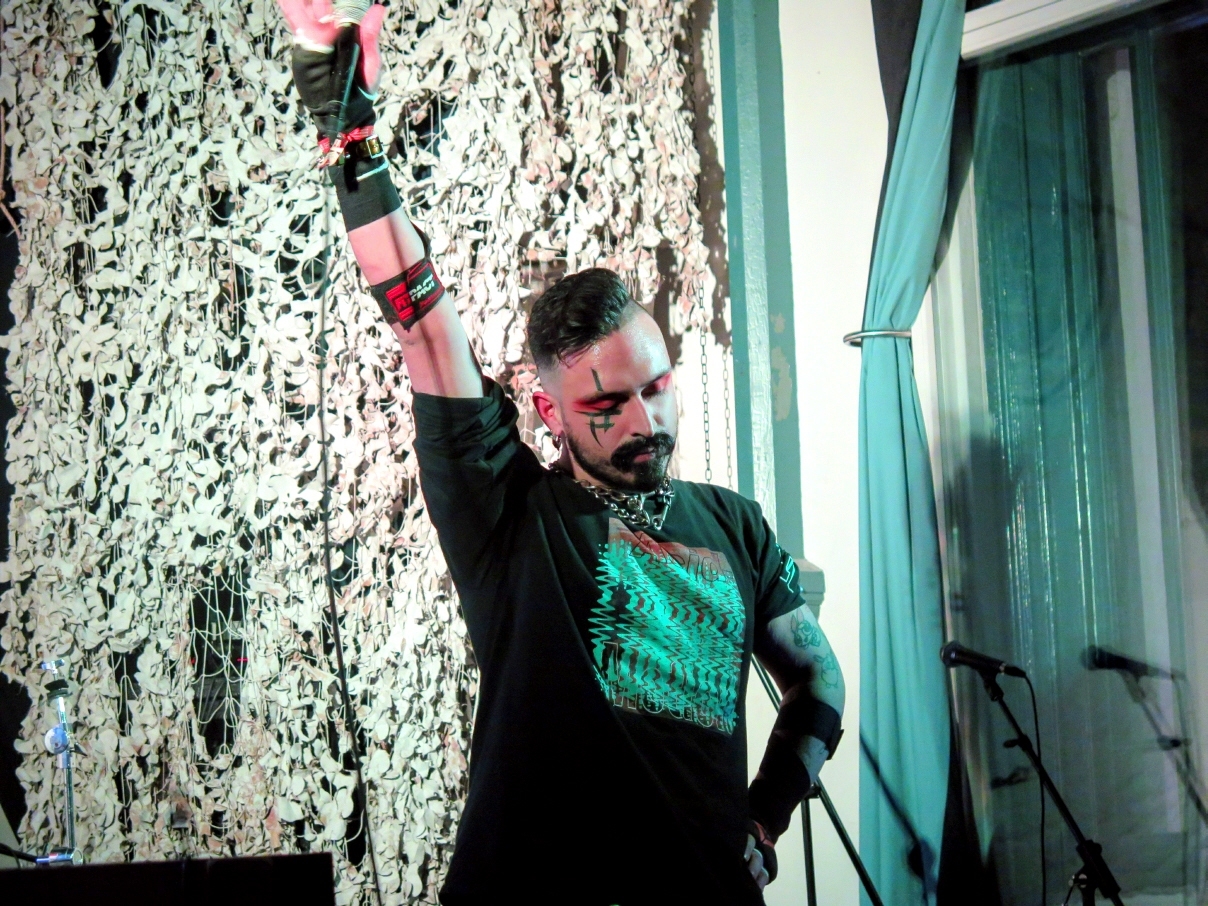 Of the three hundred plus bands, I got to see four, kicking off with Baby Tap. Hailing from London, Baby Tap’s sound can be best described as filthy digital hardcore, both in its sound and aesthetic. Taking place at The Angel Microbrewery’s upstairs room, a church hall style venue swathed in an ominous green glow, Baby Tap’s sound managed to make the room quake with a mixture of hardcore trap beats being assaulted by a wall of scattergun gabber beats, all underpinned by lyrical tales of good old fashioned facefuckery, bitches and of course, good old fashioned rough sex. Oh, and there were cupcakes. Initially offered gracefully to the crowd, the delicacies eventually ended up being thrown around the venue in a manner somewhat akin to the music of Baby Tap, forceful, chaotic, dirty and fun. 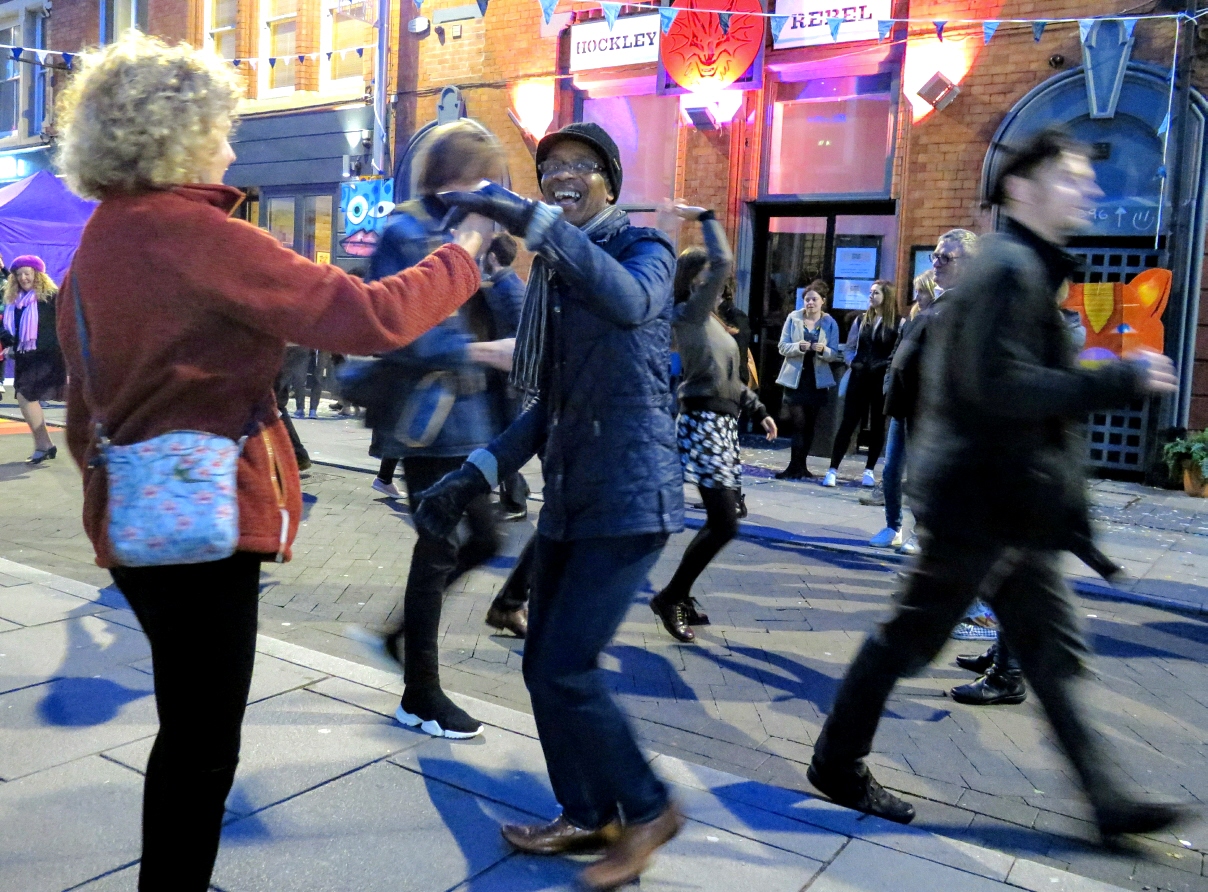 Upon leaving the venue I found myself smack bang in the centre of some impromptu street ballroom dancing, as you do. People of all ages were dancing away, having the most lovely time in a world far removed from that I’d just departed at the Angel. Being as my knowledge of ballroom dancing is limited to zero, I made sharply made my way into Rough Trade for a performance by Nottingham band Keto. 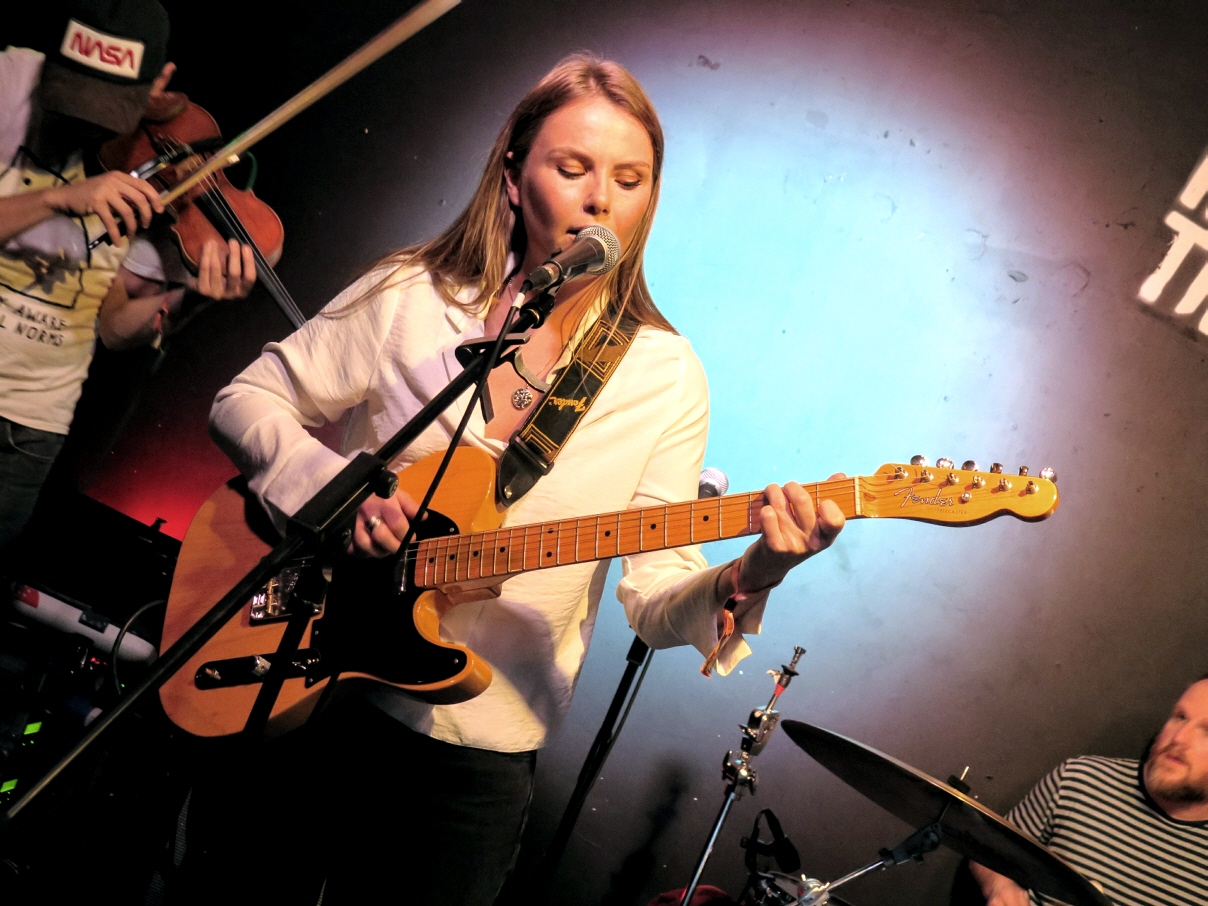 Keto is fronted by singer/songwriter Leah Sanderson, who played a seven-track set focussing on their 2018 debut album ‘Blackened Pool’. Keto’s sound grabs the audience from the off with it’s melancholic and wistful mix of violin, piano, acoustic guitar and drums. Leah Sanderson’s voice is captivating, a truly unique sound with massive range. I swear the audience member next to me was in tears during the penultimate track, and I have to admit that I nearly joined her with my own bit of minor weeping action, such was the beauty of Keto’s sound. The set closed with the band dropping down to a two piece for a piano-led rendition of Always, an album highlight that was stripped down to it’s bare bones and made all the more beautiful for it. Keto is definitely one to watch out for. 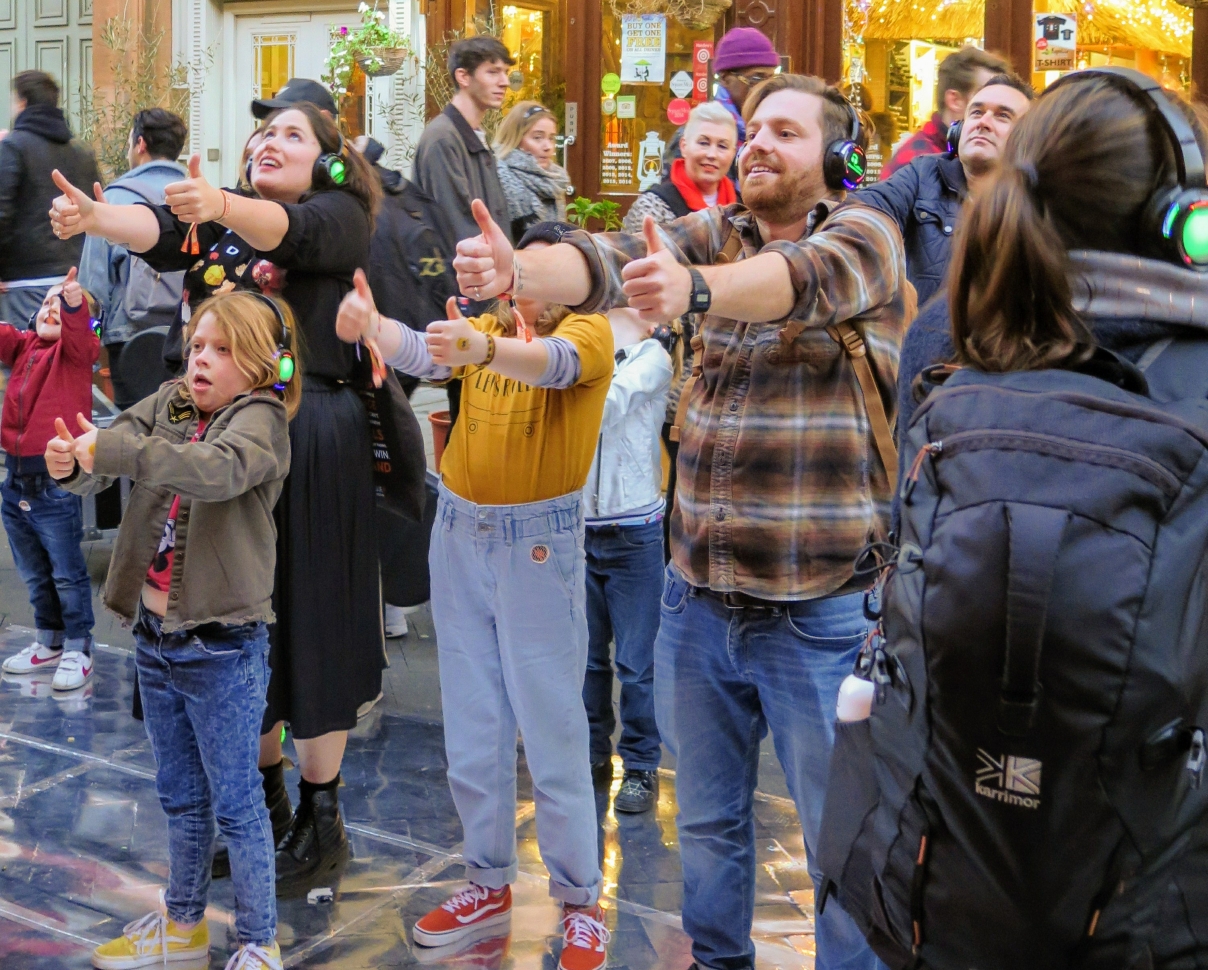 After another little meander through the Hockley Streets, pausing to take in some live street art before chuckling at some kids enjoying a bit of Silent Disco, I headed back to the ‘I’m Not From London’ stage at The Angel Microbrewery to check out Witch Of The East. Fronted by Aeris Houlihan, previously of Chambers, Witch Of The East are a two-piece who put a gothic twist onto a grunge template, and twist it into something much moodier. They are a phenomenally loud band, which comes somewhat as a shock as their debut album ‘Queen Of Insecurity’, is quite a stylistically varied and nuanced album. 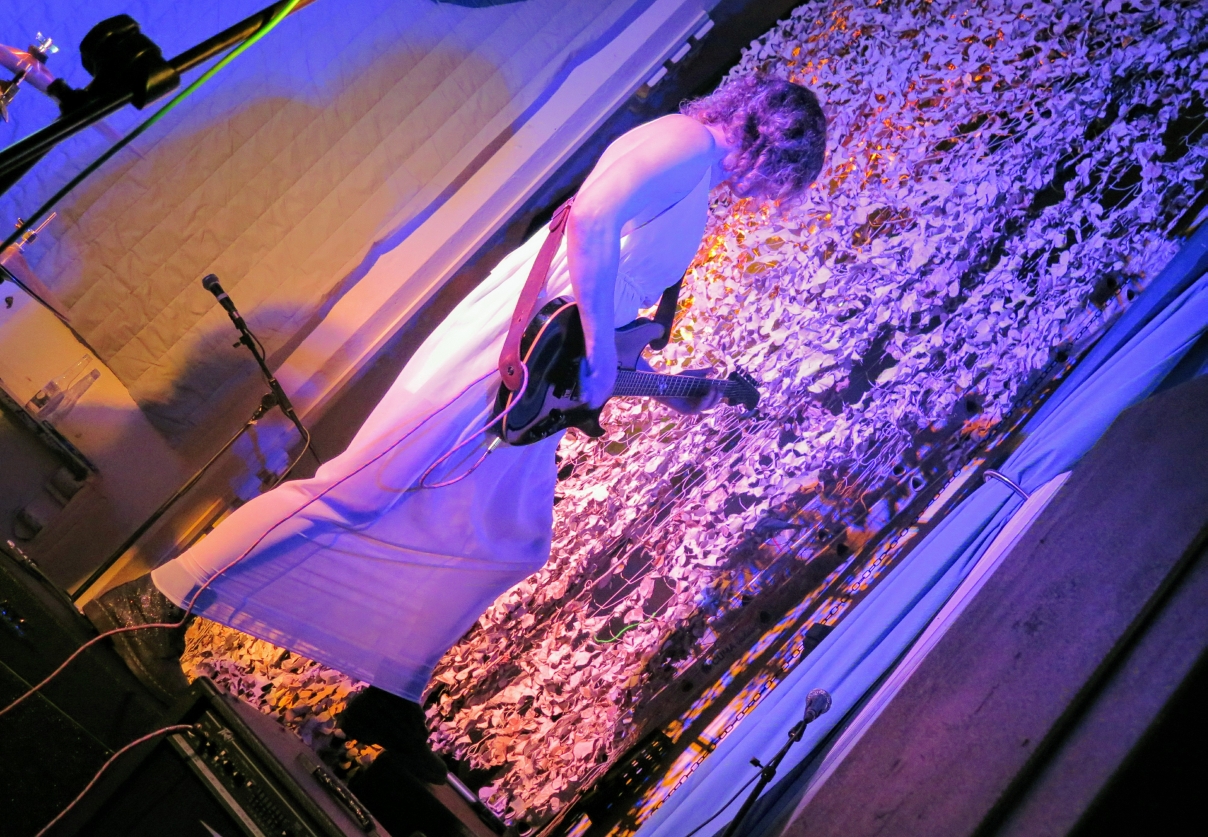 The sound roars into action and Aeris is standing atop the amps in no time, an evil grin on her face whilst the drummer beats his kit without mercy. The man is a beast, and when that violent kit mangling is paired with Aeris’ furious guitar and guttural, hellish vocals, Witch Of The East’s sound easily blows away any band that played before or after their set straight off the stage. 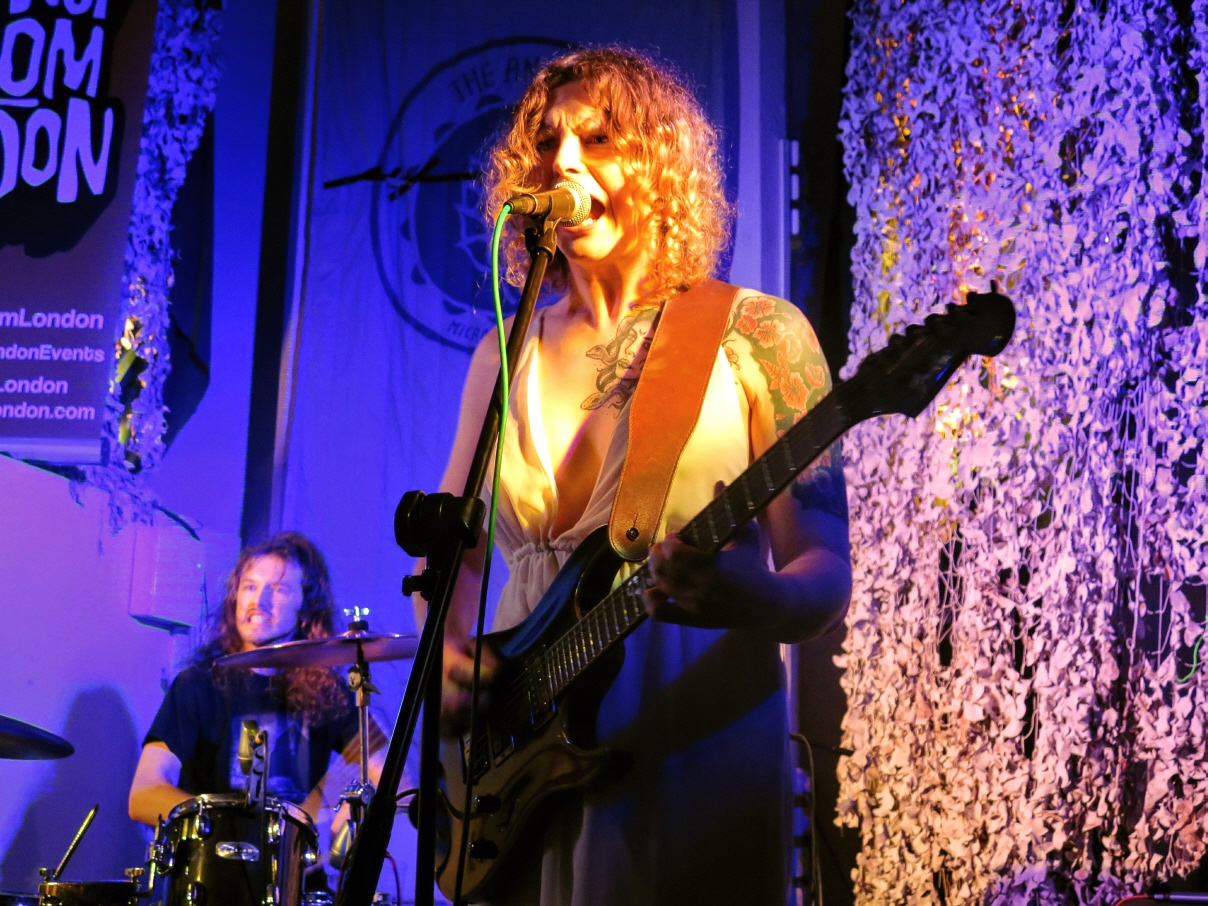 The last band of the night for me was also the one I was most looking forward to, Lingua Nada, a four piece from Germany who make the most wonderfully peculiar wonky noise pop records. Their latest album Djinn is my favourite of the year so far, and I was overjoyed to see that as part of their UK tour they were popping in to play at Hockley Hustle.

Brewdog was the venue for their set, and it was an odd layout. The band have a silly amount of gear to play with and barely any space to set it up, resulting in zero floor space for standing audience members. The audience ended up sitting side by side along horizontal tables, not dissimilar to that of a school form class. This set the scene for some good piss taking opportunities, the tired cliché of Germans having no sense of humour was soon put to rest. Lingua Nada frequently had the crowd in stitches by admonishing them in a deadpan fashion for singing along “This is not Karaoke” and dancing “Sit Down, this will be a jazz set”. 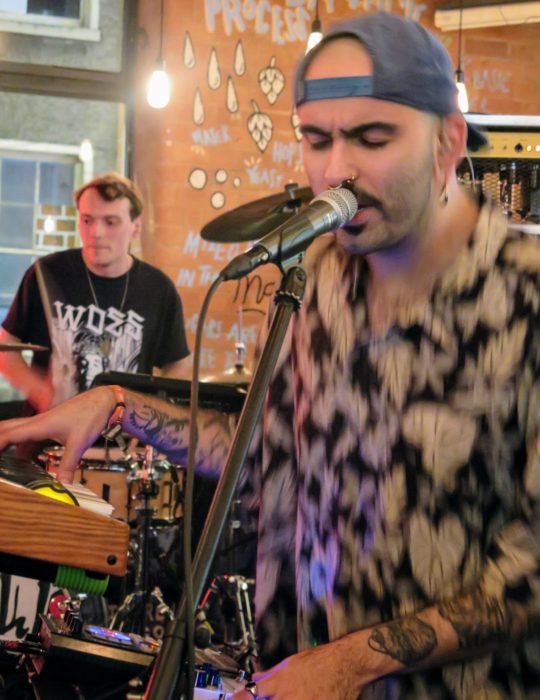 The set focussed heavily on Dijnn, and from the first note Lingua Nada displayed just how ferociously tight they are musically. Every single note on the album that on record one assumes to be some alien synth or computer-programmed effect is played to perfection, and surprisingly on guitar. I don’t think I’ve seen such a tight and technically precise band live since Fantomas, only whereas Mike Patton’s band can be a bit of a slog at times, Linga Nada’s songs whilst equally complex are never difficult to listen to. They are constructed so seamlessly that no section of their songs feels too short. Nothing outstays it’s welcome.

The set rolls to an end with the final track segueing into a bizarre electronic drum kit and cowbell demo which then twists and turns into a wall of noise that Merzbow would be proud of, before ultimately caving in on itself. The night itself clomes to an end with Lingua Nada asking anybody and everybody who enjoyed their set at Brewdog to follow them outside to the bands blue transit van so that they can buy some merch. Due to the nature of the festival, it’s pretty difficult to set up a conventional merch table, therefore a line of newly converted fans leave the pub single file, pied piper style behind front man Adam Lenox Jrn to a parked up blue transit van so that they can get their wares. It feels like a perfectly weird and wonderful way to end such a unique to a festival, and long may Hockley Hustle continue.

You can find out about the bands reviewed here at their official websites:

More information on Hockley Hustle can be found at their official website.