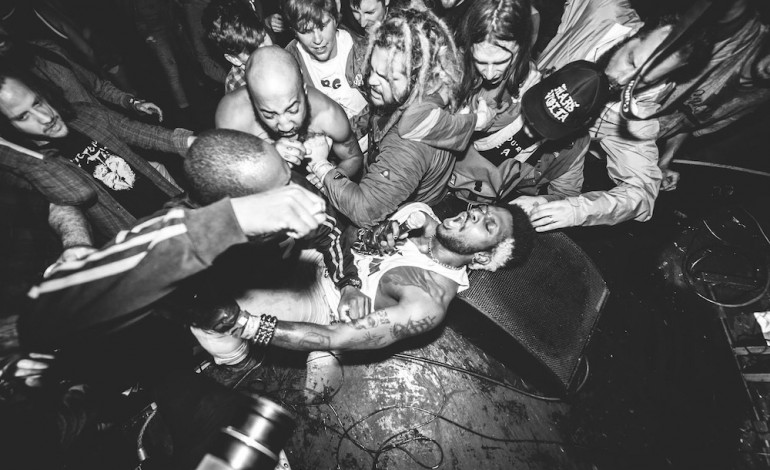 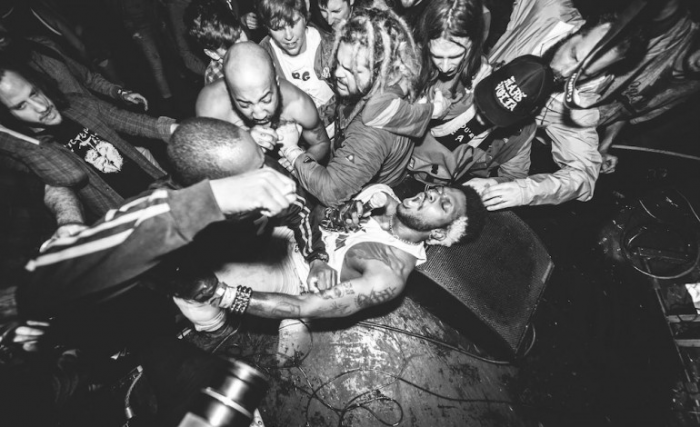 New Jersey’s much-hyped, chaotic punk duo Ho99o9 make a stop in Bristol as part of an extensive UK tour. Louder Than War’s Nick Canessa was there.

Is there a musical phrase more misguided or untrue than “punk is dead”? The ill-informed individuals dumb-founded enough to believe that the dissolution of Black Flag or the extortion of classic merchandise is somehow proof that this is the case simply aren’t looking ahead towards what modern underground music has to offer. The spirit, beliefs and sound of punk are still alive and kicking, shape-shifting into new hybrid genres whether that’s Death Grips’ brand of hip-hop-hardcore or Sleaford Mods’ dark-humoured portrayal of social/political issues.

Ho99o9 nestle themselves comfortably into this niche but make for a more interesting proposition. The New Jersey two-piece of Eaddy and theOGM act as a homage to early 80s hardcore while blending a genre-defying breed of hip-hop, thrash metal and noise into one; what almost shouldn’t work on paper makes for a violent, pummelling and frankly unforgettable display of what punk really can be.

From start to finish, their show is an exhilarating blur. Arriving onstage to dense layers of drone, theOGM lurks toward the mic like a possessed spirit, complete with vintage bridal gown and gimp mask. All it takes are a few chords for the chaos to unfurl in true hardcore fashion – people thrown into one-another, endless stage divers – there’s barely an escape in the Louisiana’s dingy, 100-odd capacity room. Ho99o9’s foray into hip-hop numbers and industrial instrumentals intertwine with their intense freak-outs perfectly, giving their understandably brief performance a greater feeling of pace and variety than your average rock show. Eaddy and theOGM bounce off one another, finishing each other’s lines and hurling themselves into the crowd as energy levels skyrocket, the ensuing mosh pits struggling to contain the mess of bodies that hammer away at the venue walls.

Even the parts that really shouldn’t work – covers of Bad Brains ‘Attitude’ and an encore of ‘Seeing Red’ by Minor Threat – naturally seep into the evening without a single soul in attendance batting an eyelid. You can talk about the death of the genre all you like, but having bear witness to Ho99o9’s heart-stopping showcase it’s safe to say that this duo may well be the future of punk as we know it.