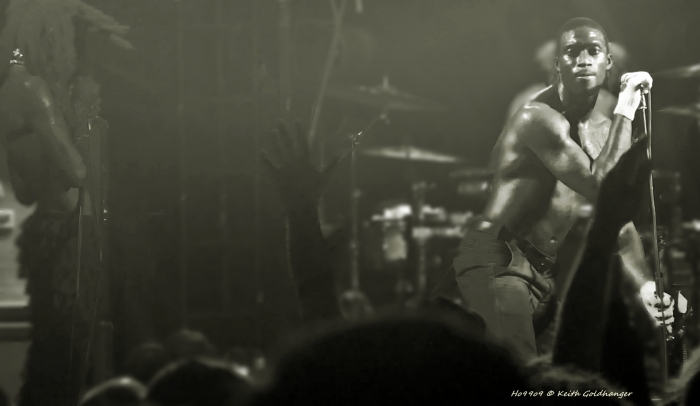 The abrasive music of Ho99o9  could be be the soundtrack of a world either going down the pan or a battle cry for those with a conscience to make things better. Keith Goldhanger leaves his gloves in the car and puts his hands in the air.

If you’ve got this far down the page then you’ll already know its pronounced ‘horror’ and that we have another shouting screaming fast and furious band to add to the collection of all those other fast and furious bands some of us have slowly built up a love for over the past few decades.

Formed on the East Coast and relocated to the West Coast of the States this is a band that can make Atari Teenage Riot sound like The Prodigy and occasionally remind us of the evening we crammed into the Clarendon in Hammersmith to witness Bad Brains (who were given a big nod to as the night came to a close).

This isn’t a trio we are likely to see on The One Show in the foreseeable future, however this is so captivating and thrilling one feels it’s simply a matter of time before the rooms that this trio perform in will get larger and even more raucous that we’re seeing here (and may even accommodate the odd Papa Roach fan – but that’s another story).

Tonight they’re allowing the bass to rumble, the feedback to quiver and shriek, the drums pound faster than a Slipknot solo as the twin voices scream and shout and tell us what we want to hear. This is Breathless hardcore, hip hop, punk rock at it’s finest and the messages are clear. Government oppression, police oppression, racism, sexism, (all the nasty stuff) and in 2017 this message needs to be shouted by the loudest bands by the angriest youths with the biggest fire in their bellies towards those that still haven’t caught on that it’s a better course of action to respect everything in life around us and to comfort anyone who feels alone in their unhappiness about the way this world is heading.

Ho99o9 have an audio output that is as thrilling as anything we can find available at the present time and the messages are clear…. Chris Martin writing cryptic messages on his wrist this is not.

If the experience tonight may lose a little intensity in the vast room known to the locals as the Electric Ballroom the evening is still a no holds barred roller coaster ride that even the most hardcore of noise lovers may find an exhausting experience as tunes stop suddenly and quickly fire up again before we can catch our breath whilst static observers can be seen craning their collective necks wondering how this noise is being made in front of them. There are no guitars on stage, every sound triggered off  by electronics that allow the duo of theOGM and Eaddy to cover as much of the stage and at times the middle of the room to project their voices from. (That drum kit seems to be getting a lot bigger nowadays also).

The first twenty minutes this evening are more akin to an old Crass gig, the room is in virtual darkness occasionally interrupted by the odd flickering light. The usual Death Grips comparison kicks in later (check out LA band Clipping if you don’t know them yet also) however once the sweat starts flowing, the shirts come off and the lights start flickering we’re treated to a full on sonic assault that doesn’t let the viewer down for one thrilling , fist in the air (mother fucking) moment.

The support band we’ll mention were called Kate Mo$$- spelt like this apparently and consisted of a bloke with bin liner wrapped across his face, a drummer (nothing to compare him to) and a bloke that looked like the mid 90’s character who used to shout at people in Kilburn High Rd in the mid 90’s and always wore a white Lynyrd Skynyrd top. This bloke, with Gold teeth just smiled and sang along to the songs without a mike in his hand but held a camcorder that seemed to be filming the ceiling. There was also a young girl in wedding dress on stage, writhing around the floor sucking the singers thumbs until about ten minutes in when she simply danced around in her pants looking rather silly. Musically, it was a constant barrage of shouting over layers of noise (at one point we thought that noise might be The Normals TVOD) and may have been more entertaining had they kept their clothes on and cut out all the trying to be shocking stuff when their natural weirdness would hopefully have shone through brighter and become more palatable. Menacing yes, a bit too fucked up for one or two of us ? (yes again) but this freshly discovered soundcloud page by the band is pretty fantastic though.

H09909 though seem to have a natural presence that keep the punters gripped, the mosh pit active and throw out a barrage of noise that is already escalating into today’s loudest voice of dissent. This band are a reminder that all is not well and that the world needs mending before we find ourselves inhabiting a big dust bowl with a battered Kasabian poster flickering on an empty derelict building and the tunes of this superb band still echoing around anywhere left with electricity.