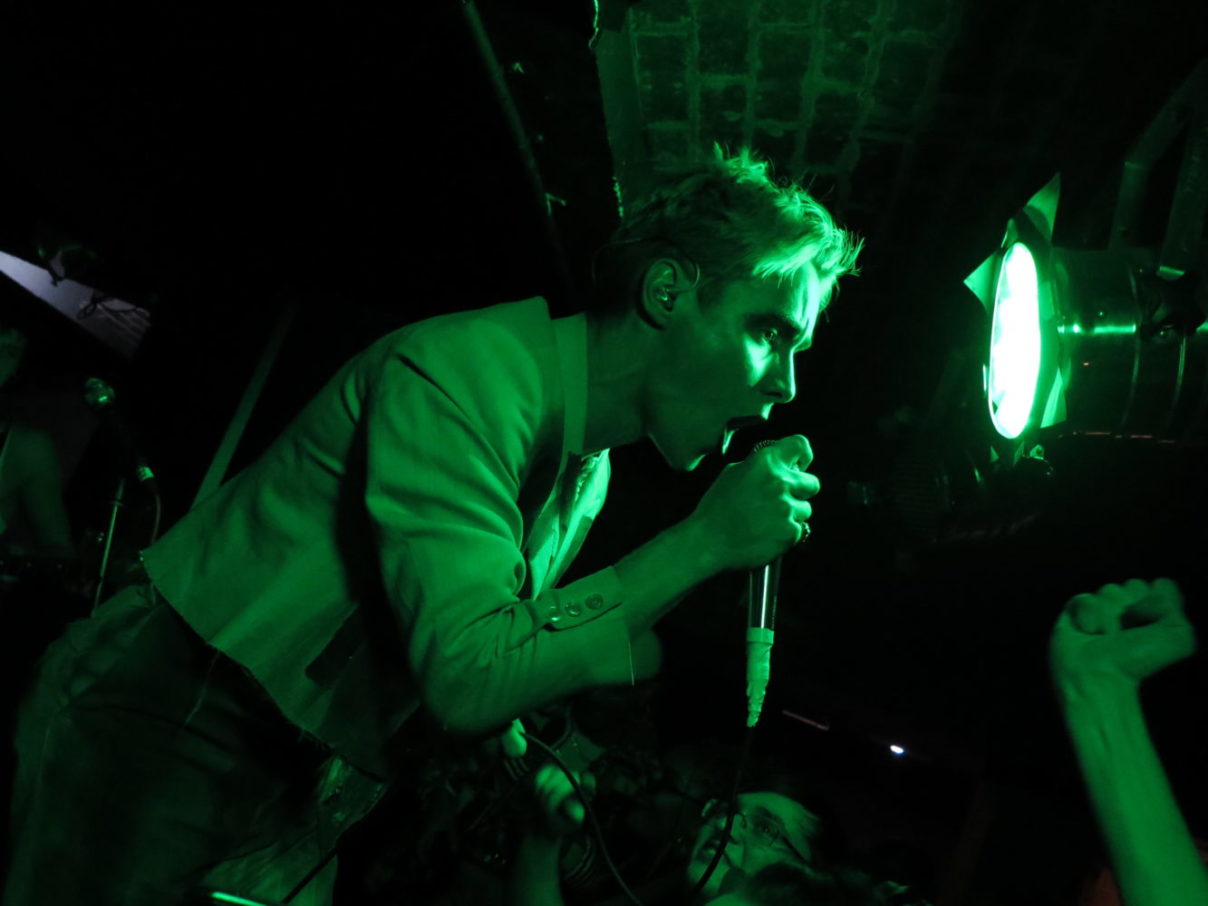 HMLTD bring their glamour and chaos to town with stunning effect, louderthanwar’s Christopher Lloyd was there to join in on the fun.

This question has become somewhat of a slogan for HMLTD who have spent the last four years banging out an impressive batch of singles that, whilst rarely sounding like the same band, frequently sound like Roxy Music hanging pitching a Hi-NRG fetish electro banger to the Eurovision Song Contest committee. This in turn makes those songs sound EXACTLY like HMLTD.

Maybe it’ll be Album Never. Arguably an HMLTD album would perhaps raise the profile of the band and obviously prove helpful on the old band coffers, but whilst they are playing gigs of such riotous glamour and fun as they did tonight in a small pub basement in Birmingham, maybe touring and sporadically banging out one off songs containing some of the best new music to come from this isle in a long time is not necessarily a bad thing.

The night kicked off with tour support ‘Walt Disco’. Imagine Billy Mackenzie in Adam Ant wear, fronting Sparks, and you’re halfway there. There was vocal histrionics and amazingly sharp guitars aplenty, as well as a somewhat ridiculous yet fantastic running on the spot dance move section. I was only nine years old back in the early eighties when Birmingham’s Roadrunner club was around, hosting legendary parties by Duran Duran and the like. I can only imagine that had Walt Disco around during that period, they’d have fit in nicely. 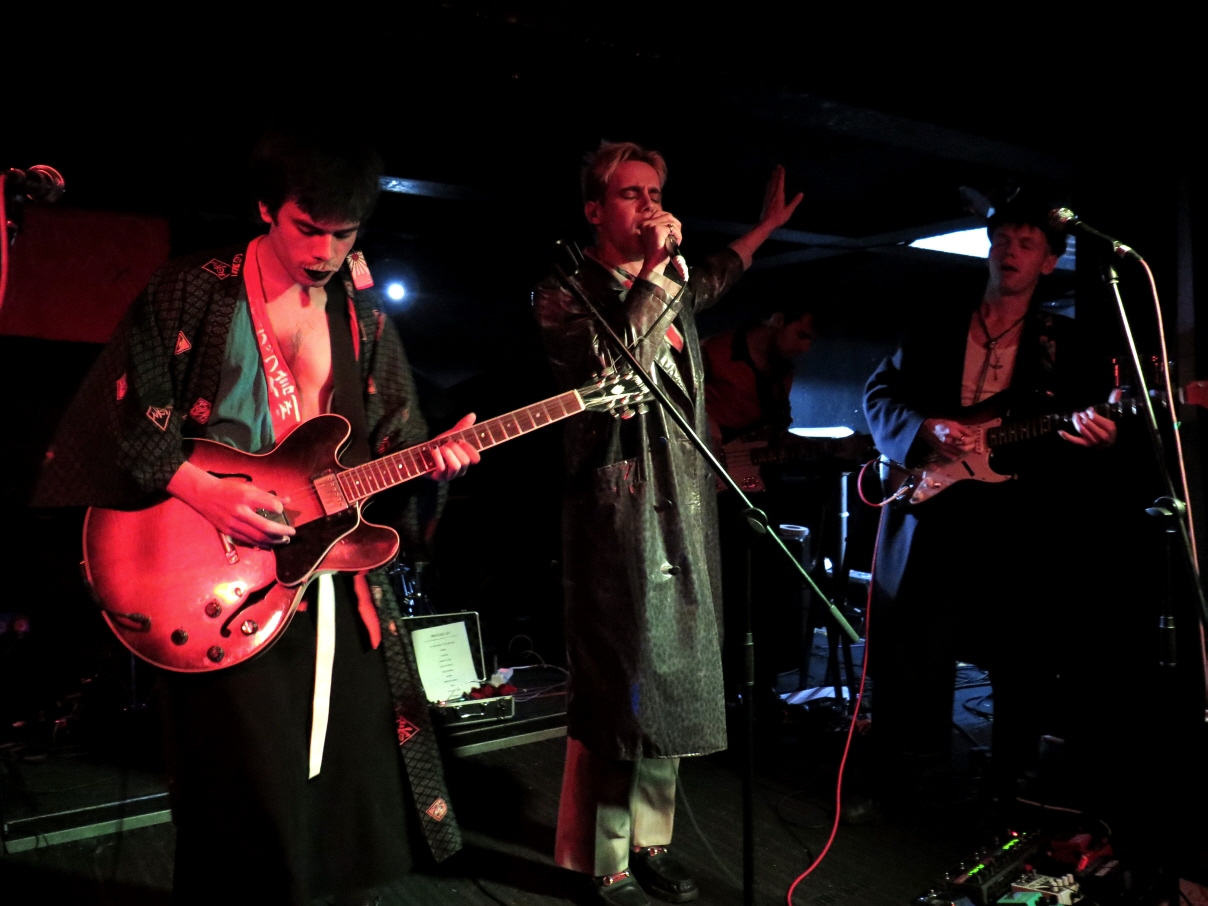 Whilst it’s arguable that as with Walt Disco, HMLTD has a somewhat 70’s Glam meets 80’s New Romantic edge to them, what separates them is that HMLTD clearly bring a new aesthetic to the sound. Set opener, Is This What You Wanted, illustrates this fantastically by kicking off as a slow burning, Lynchian bluesy dirge and ending it’s life as a drum and bass riffing ball of pure anxious energy, the band setting their stall solidly before bursting into early single, Music, which sees drummer ‘Achilleas’ pounding out a brutal tribal beat as front man Henry Chisolm blasts out his vocals with seemingly classically trained precision. It’s fair to say he has a fair set of pipes on him, and it’s matched with pure charisma, the perfect recipe for a front man of such a glamorous band. He’s got the room in the palm of his hands, and it’s not long until the venue are literally falling over themselves to crush their way to the front of the stage where Henry spends most of his time, reaching out and sweating over a bunch of rabid fans.

Amongst the slew of established bangers there were a couple of new tracks premiered in the set. West Is Dead is a politically furious track that feels as though their recent time touring with Nine Inch Nails has had some influence upon their sound, whilst the second newie of the evening, Mikey’s Way, would not sound out of place on a John Hughes film soundtrack. Both tracks displayed a totally different tone to HMLTD’s sound, and yet were equally wondrous.

Debut single Stained closed the night as the venue place into the perfect visual counterpart to the tracks insanity. Bodies were physically unable to remain upright such was the surge towards the stage. Henry was dragged to the floor along as the music swirled from disco to a bass-fuelled nightmare, before the lighting dropped into near total darkness as the sound came to it’s intense crescendo before caving in on itself. It culminated in pure insanity on every level, which is the best way for any gig to end.