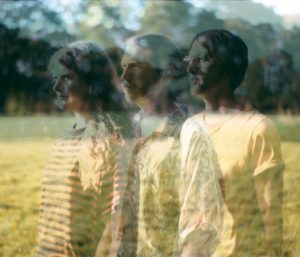 Hlemma have announced details of their forthcoming debut EP. ‘Slow To Tremor’ contains five songs and will be released via the bands Bandcamp page.

Hlemma are trio Owain Griffiths, Faye Gibson and Josef Prygodzicz, who all contribute equally in the writing and production processes. The project formed in Cardiff where all three were long-standing members of the music community. Hlemma spent much of last summer playing their music live, including festivals such as Greenman and Larmer Tree, before relocating to Stockholm, Sweden (Faye and Josef) and Leipzig, Germany (Owain) where they finished the production of ‘Slow to Tremor’. The EP was mixed by friend and producer Llion Robertson of Cotton Wolf, and is an introduction to the music Hlemma make together.

‘Slow To Tremor’ is a strong debut release by Hlemma which showcases all of the relevant members skills. It is an EP of warm and immersive dream-pop which in turns is one minute beat-driven Krautrock (‘Mirrored’), wonderfully off-kilter alt-pop (‘Afon’) and thrillingly addictive digital blues (‘Soft Fingers’).

Owain also releases music as Carw, and Faye and Josef release music together as Winter Villains.