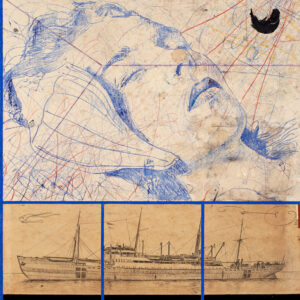 Waves of Haste by Hjalte Ross is available on Bandcamp and Spotify.

With all its fluctuations and steady, glowing feel, Waves of Haste is an aural love letter, an attempt to seize the moment when the time is ticking away in the presence of a loved one. Bleeding one into another, these nine songs make a powerful statement.

The Danish songwriter’s second album arrests one’s attention instantly. Starting with a gradually evolving sound of electric organ, the opening track ‘Accidents’ immediately takes the listener into the sonically saturated world of the auteur. Interwoven with Hjalte Ross’s intricate acoustic guitar playing, transparent piano sound, and smooth bass lines, the song’s texture is as clear and deep as the ocean water in late autumn. Elsewhere (and taking off with an elevating crescendo), ‘Adrenaline’ leaves a listener with a cathartic sensation.

It feels a very “mature” record: nostalgia-driven ‘Off My Mind’ evokes a cinematic sound, or Lee Hazlewood in ‘My Autumn’s Done Come’. And lines such as ‘Cause I am older than I ever ought / Thou it would seem, accidents have gone to me / And in a way, I am hoping it stays’ communicate careful self-reflection and wisdom achieved through acceptance.

Following his critically acclaimed and slightly more stripped-down debut record Embody, Waves of Haste appears to be a multilayered, personal work. Both sound and lyrics reveal deeper emotional undertones of the author. The title track is mesmeric ans evokes the ocean, its spirit also hinted by the dreamy cover artwork by Kasper Eistrup. The album was, indeed, partly recorded in a marine environment – by an isolated lighthouse on one of the Lofoten islands. And the waltzing dynamics of ‘Passes By’ cradle you on sound waves as if these oscillations were ocean currents. Field recordings featuring sounds of water in the finale emphasize the fluctuating nature of our feelings.

Some other tracks on the new album bring into mind the fast pace of travelling. Celebratory yet slightly wistful, ‘Thinking About You’ suggests Broken Social Scene and, perhaps, Ross’s compatriots Efterklang, yet it has its own unique charm. Reinforced by the wind section, drums throb gently as if it was pulsing in excited temples of someone on the road. Hjalte Ross, whose travels in search for the sound extended from the Lofoten islands to New York, is that seafarer.