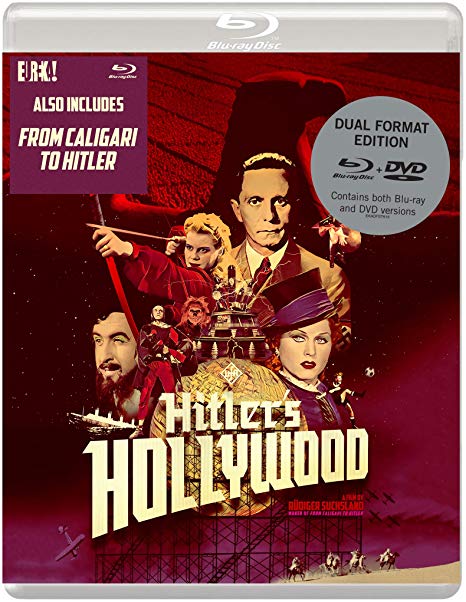 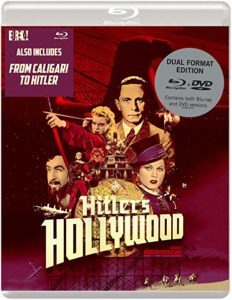 Jamie Havlin assesses a documentary, Hitler’s Hollywood, which examines the rigid political and cultural censorship applied to the thousand or so films made in Germany during the reign of the Nazi Party.

Normally I wouldn’t say this, but if you do decide to buy this release then I would strongly advise you to first watch the main extra, the documentary From Caligari to Hitler: German Cinema in the Age of the Masses. Directed by Rüdiger Suchsland in 2014, this focusses on the creativity and experimentation of German Cinema during the Weimar Republic years and the impact these movies had on German and worldwide audiences.

During this period German cinema was at the forefront of innovation. Directors such as Robert Wiene, F.W. Murnau and Fritz Lang, and their films like The Cabinet of Dr. Caligari, Nosferatu and Metropolis won fans around the globe, as did actors like Marlene Dietrich and Emil Jannings, the first Best Actor Oscar recipient at the 1929 ceremony.

But this golden era was relatively short-lived and the bulk of the talent who hadn’t already left, soon migrated once the Nazis seized power in 1933, the year when Hitler’s Hollywood begins.

Like Hitler, the German Propaganda Minister wanted cinema to act as ideological and aesthetic alternative to Hollywood. He effectively took complete control of film production and Suchsland, at one point, even imagines the Third Reich as a movie directed by him. 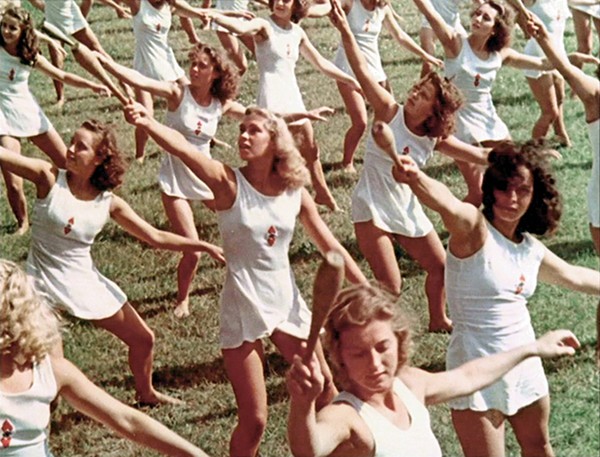 Superficially, judging by the archival footage shown here, many German films didn’t appear all that different from their better known British and American equivalents. There were glitzy musicals, upbeat comedies with happy-go-lucky lead characters, melodramas, and adventure stories. But with a twist. A twisted twist.

In among the song and dance routines and sometimes forced humour, these films were made to reflect the kind of society that the Nazis longed for. Brave Aryan men prepared to sacrifice their lives for the cause of the Fatherland. Faithful, strong women who would support these men and raise their children in the exact manner recommended by the hateful founders of fascism.

Scapegoating was commonplace with the low point surely being the infamous Jew Süss. This 1940 film was conceived with the sole intention of spreading vicious anti-Semitic propaganda. Heinrich Himmler insisted that all the soldiers of the SS watched this monstrosity.

Then there’s Erick Waschneck’s The Rothschilds, from the same year, represented by a clip where a secret diagram to conquer the world from London to Jerusalem is drawn by a Jew and just happens to look uncannily like the Star of David. As for Herbert Selpin’s Titanic, well, apparently Jews played a bigger part in its sinking than any iceberg.

‘These films are better than their reputation,’ we’re informed early in Hitler’s Hollywood. This, though, is damning with the very faintest of praise. Admittedly Leni Riefenstahl’s Triumph of the Will and Olympia demonstrated an impressive visual flair and, surprisingly, some movies even managed to slip through the net and display a degree of political ambiguity at times.

Wolfgang Liebeneiner’s Melody of a Great City (Großstadtmelodie) could even be seen in some respects as a feminist film – the first eighty minutes anyway. Here a young woman from the country moves to Berlin hoping to establish herself as a photographer. She is happily single and friendly with a man she shows no desire to embark on a relationship with. Inevitably, it strays down the propaganda route towards its end.

Blocked from leaving Germany due to bad timing, talented director G.W. Pabst delivered films where at least some form of subversive thought was are hidden deep within the story.

As the end credits of Hitler’s Hollywood rolled though, I couldn’t muster a shred of enthusiasm to watch any of the work featured, even Pabst’s Paracelsus which is shown at some length and looks to have been shot imaginatively. Before too long, though, I definitely intend to delve into this fascinating collage of clips again and I also intend to investigate more of the works featured in From Caligari to Hitler.

There is an option between the original German language version with optional English subtitles or with English language narration by cult actor Udo Kier. More on the film here.