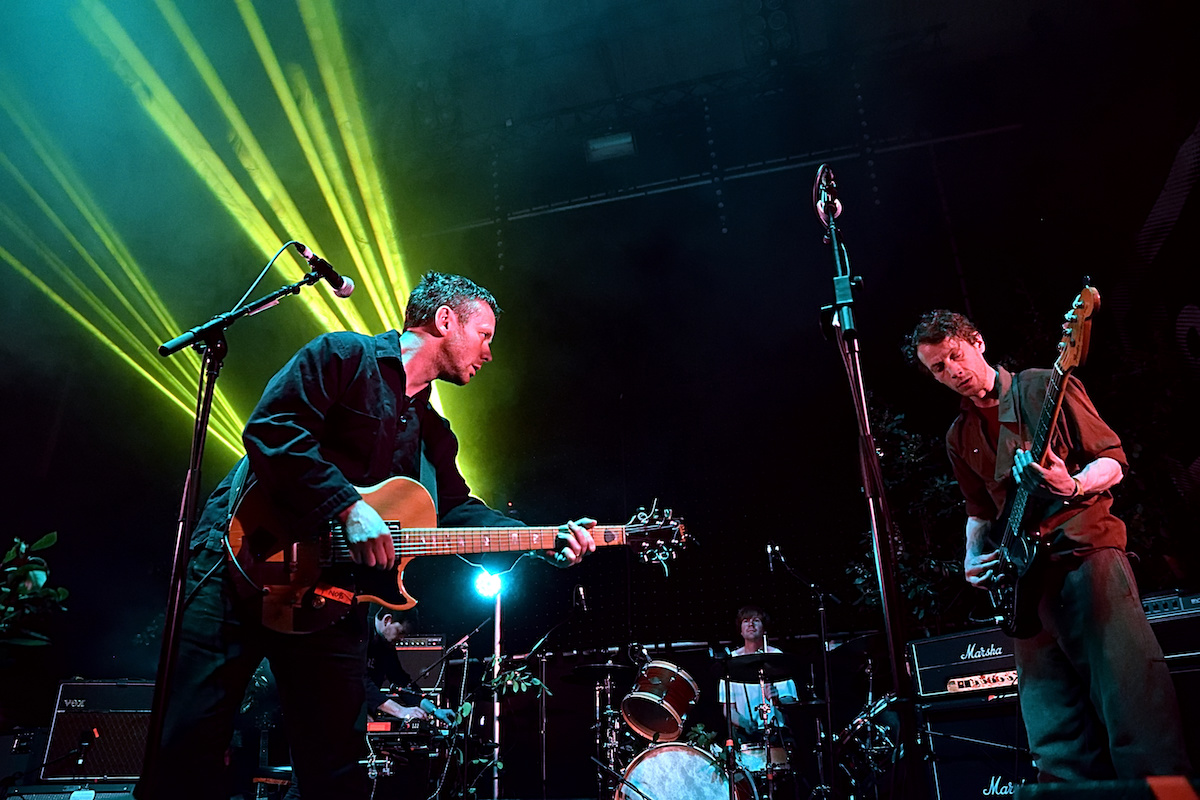 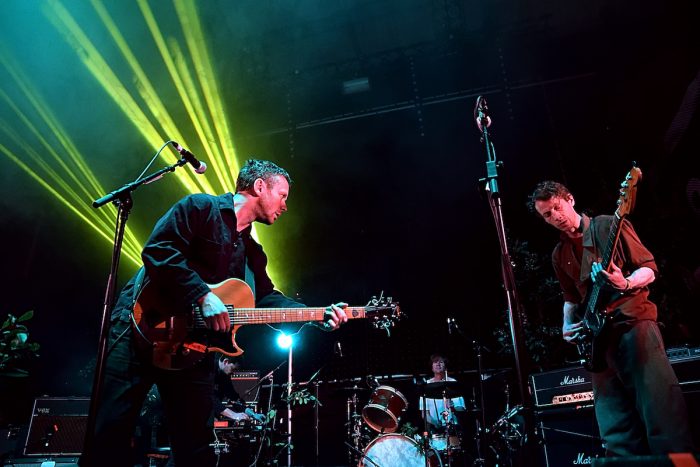 The main event, the jewel in the Hit The North crown did not disappoint with a huge line up that truly delivered an exceptional day of live music!

Having had an incredible day at Meet The North hopes were exceptionally high for the main event and with a jam packed line up, its an early start for Hit The North. It’s another scorching day in Newcastle thus making the Bridge Hotel’s function room a veritable sun trap come greenhouse. Fortunately, this doesn’t seem to phase Leeds band Fizzy Blood who set about blowing off any cobwebs in rather furious fashion.

With tracks like Summer Of Luv and ADHD we’re left bewildered as to why Fizzy Blood aren’t already huge, today they’re on fire and their thunderous set can be heard from about half a mile away. As the early crowd happily dance their way into another fine day of music Fizzy Blood set the bar particularly high early on!

No Hot Ashes are next on our packed schedule and their upbeat indie rock is a slight comedown from the frenetic Fizzy Blood, they appear to be suitably excitable but unfortunately on this occasion it doesn’t enthuse us. Which is a shame as there appears to be all of the ingredients there, but today we’re left wanting a little more from these guys.

At the opposite end of the spectrum Art School Girlfriend truly blows us away with her delicate and heartfelt tracks, a total contrast to anything that has gone before her today. These sparse tracks set against the grandiose backdrop of Newcastle’s Mining Institute Library is the perfect combination. It’s far too shorter set as we find ourselves lost in these captivating tracks, this will definitely not be the last we hear of Art School Girlfriend.

Local lads The Old Pink House are quickly gathering momentum following a string of excellent singles, hopes are high for these guys and today they take to the biggest stage at Hit The North. With tracks like Expectations in their armoury it’s quick to see why they’re tipped for the big time, radio friendly and upbeat and if todays set is anything to go by great live to. The Old Pink House have everything that is required, it’ll not be for everyone but they certainly enthuse a biased crowd today!

Next up are a band who we’ve said on a number of occasions should be one of the biggest bands in the country by now, and yet again they prove us right. Avalanche Party finally seem to be gaining recognition on a national level, they return to the Riverside today in truly visceral form. An intense and exciting set as we’ve come to expect, the likes of Solid Gold and I’m So Wet are always highlights. However, it’s their stage presence, audience interaction and everything else that makes Avalanche Party a true force to be reckoned with, they have to be seen to be believed. If you’ve still yet to hear or see Avalanche Party we advise you do so at your earliest convenience!

Ireland’s Whenyoung recently signed to Yala records, their upbeat sound is sure to be a hit and everything they’ve done so far has been excellent. Tonight live it sounds even better Pretty Pure, Actor and The Collector all possess this really exciting and intriguing sound. This is all in spite of their meek and mild stage presence for a band with such a good sound they seem subdued and humble its quite pleasant compared to the sea of egos on many of the other stages. Whenyoung are certainly one of our highlights of the day.

Having billed Vundabar as one of our dead certs and favourites from this packed line up, they unfortunately fail to deliver. Whilst their tracks are brilliant, their attitude and behaviour truly detracts from their performance, constant complaints and acting up from the lead singer mar what is otherwise a solid performance. On record they’re great but live they truly fail to deliver.

One band who did take us by surprise for all of the right reasons though are Kolars, having recently supported Shonen Knife this duo were on fire. It’s an unconventional setup but one we really got on board with. Drummer Lauren Brown tap dances on a bass drum whilst Rob Kolar plays upbeat rockabilly riffs, the pair are certainly individual and the sound that they create is truly exciting. It makes a change in a sea of similar sounding bands, these guys without a doubt stand out as something truly different and they’re definitely one of our highlights.

Marmozets were the name on everyone’s lips when people were asked who they were excited about seeing so it felt amiss not to check them out. They certainly put on an ecstatic show, with circle pits from the off but they seemed to be able to tone things down at will. Throwing the odd slow song in really changed the dynamic of the set, and the crowd reaction that went with this. However, it fell to tracks like Play to really compound the understanding of why everyone was so excited about them. A truly impressive set from Marmozets!

The diversity of this line up meant that we followed up this blast of hardcore with the most beautiful singer-songwriter Stella Donelly. She immediately had this crowd under her spell, her sweet Aussie accent and heartfelt and relatable tracks was all that she needed. Most singer-songwriters these days seem to be firmly planted in a world of misery but Donelly makes light of situations and there is a delightful upbeat nature to her tracks. It was such a refreshing change without doubt she is a star in the making, on top of her spellbinding performance she was completely down to earth and unbelievably sweet. Qualities which are often lost among the egos of the music world, for this alone she deserves to be a star, this is definitely not the last we’re going to hear of Stella Donelly.

Anteros are tipped for the big time and tonight they show us why, their tracks are laden with hooks which have this crowd eagerly singing along. Their track Bonnie receives what has become a customary stage invasion from the enthusiastic crowd. Singer Laura Hayden bounces around the stage eagerly and she appears to be what sets the band apart,since this sort of indie rock can be easily found on many line ups. Her stage presence and fervency appears to be what sets Anteros apart from everyone else in an otherwise crowded market.

Another Australian act on todays line up are Hockey Dad who seem to have slacker rock down to a tee, their laidback surf rock is perfect when you’re just about overloaded with indie rock. There’s an excitement that seems to be lacking elsewhere as they tear through an excitable and fun set, they’re definitely one to watch out for!

Our final band from the humongous line up need no introduction, the almighty British Sea Power have long been a British institution. The Brighton band take to the stage to be greeted by a rousing reception, it feels like all day has been building to this. Their set is awash with crowd pleasing favourites, the likes of No Lucifer, Machineries Of Joy and Remember Me all ignite the fires of this crowd.

They’re rightfully one of the highlights of the day, in amongst this sea of new bands British Sea Power still stand out as being one of the best bands around. Equally it is all compounded by the appearance of Bipolar Bear and Ursine Ultra. The former getting a little over excited when let loose on stage! It rounds of what has been three days of exceptional music in Newcastle.

At this years Hit The North we’ve been unbelievably lucky to discover new acts from across the globe, all of whom we cannot wait to hear more from. It was a true triumph all topped off by an outstanding performance from British Sea Power, we cannot wait to come back again and do it all again next year!