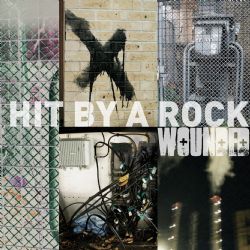 Hit By A Rock ‘Wounded’ (Other Sounds)
CD/DL
Available now

”ËœWounded’ is the debut album from London based Hit By A Rock aka Jim Whelan seasoned producer, re-mixer and soundtrack composer.

”ËœWounded’ collects diverse strands and genres of music; a distant descendent of dubstep, world music, reggae, a beat-driven symphony of sounds. What Whelan has effortlessly done is to blend all this together – often when others try this the results are shambolic, lacking cohesion, ”ËœWounded’ succeeds as the unifying element is bass ”â€œ huge meaty slabs which was then captured with exquisite dub production, add to this guest vocalists including Mercury nominatedÃ‚Â Susheela Raman, Raymond Antrobus, Zayna Daze and Zewditu Johannes whose voices interweave with some truly infectious melody lines.

”ËœWounded’ is both brutal and delicate, distorted but clear ”â€œ a perfect balance; listening to this will whisk you through the inner city capturing snippets of sound as you pass by.

An ever surprising recording that will have you recalling influences, citing comparisons; don’t bother, just relax and let the sounds envelope you.