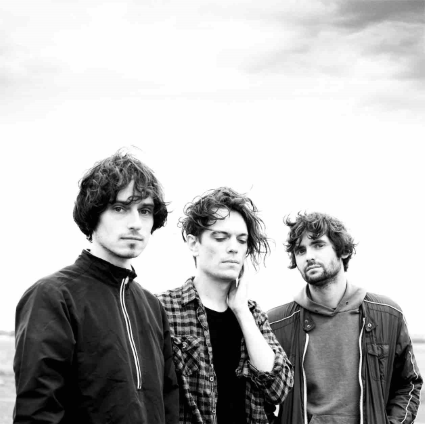 Berlin-based trio The History of Colour TV have just released their third album Something Like Eternity via France’s Crane Records. Earlier the band released two singles in support of this LP: Wreck and As Gray As Park Can Be.

The back story to this album is inspired by the band’s desire to work with notable producer Peter Deimel (The Wedding Present, Shellac, The Ex), for which they traveled to France in the spring of 2016 to record with him at the legendary Black Box Recording Studio. Days of making music in the French countryside, close to the Loire Valley, saw them depart from their previous sound, instead bringing a raw, minimalist aesthetic to the new release.

Stylistically, these are both dynamic and open live recordings with minimal overdubs and, in this respect, they represent a snapshot of the album as a whole. Based on narrative themes, these songs blend melodic sensibilities with ragged guitar textures. The first track builds nicely on melancholic arpeggio patterns.

British artist Jaike Stambach founded The History Of Colour TV in 2010. Initially conceived as a solo multimedia project involving noisy hypnotic output through audio, video and soundtrack offerings, he was eventually joined byt Markus Mocydlarz and Janek Sprachta. Over the course of two albums and multiple EPs, released through Bruit Blanc and Saint Marie Records, the band has been unabashedly diverse in their approach, exploring harsh noise, sound collages and reverb-saturated dreampop, to the stripped-down rock of their more recent offerings. They also toured extensively while establishing a remarkable presence on the Berlin music scene.

The more organic approach taken for the band’s second widely acclaimed album Shapes of Spilt Blood Spelt Love was stripped of the electronic attributes of the band’s debut album Emerald Cures Chic Ills to present a spacious mix of strategically sparse layers of guitars, minimalist rhythmic patterns and bass-heavy riffs. In contrast, Something Like Eternity is an album of sparse, immediate performances captured live in studio. The room seemingly reverberates to a wide dynamic range of sonic tapestries ranging from fleeting moments of near-silence to elongated passages of guitar meltdowns, loaded with emotion.

Something Like Eternity is available both digitally and on vinyl, co-released via French label Cranes Records and the band’s own imprint Weird Books. Band member Janek Sprachta has also just released Grow, his second solo album via Midira Records, worthy of exploring for a sonic journey through ambient, modern classic and post rock.