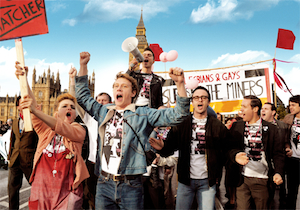 This Sunday 7th September the Yorkshire town of Ilkley – which held its first film festival this year despite having no cinema – will commemorate the 1984 miners’ strike with a full day of films, panels and discussions.

Marking 30 years since the strike, the one-day film festival special will show four films including a preview of Pride, starring Bill Nighy, which is about to be released in cinemas.

There will also be live panel discussions and Q&As with special guests including former miners, journalists and Anne Scargill – wife of Arthur Scargill at the time of the strikes.

Other films that will be shown are The Miners’ Hymns, The Battle of Orgreave, and documentary Still The Enemy Within, which won the audience award at Sheffield DocFest this year and features previously unseen historic footage.

Tickets for the full day cost £15, and individual tickets are also available.