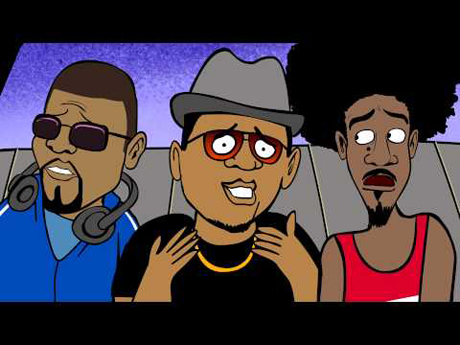 check out these excellent animated reenactments from a selection of Hip Hop artists such as Wu Tangs RZA, OutKast (image right) and Danny Brown as they look back on some of the craziest and oddest moments of their careers/lives. Also including stories from Wayne Coyne on his vibrating panties and Washington punk group The Melvin’s who recount their nightmare tour of 86. Here’s a selection of videos produced by DJ Vlad’s ‘Aaron the Artist’ and Pitchfork with ‘Frames’

GZA recalls early visits to the Bronx, block parties, and a young RZA getting in trouble.

DJ Kay Slay reminisces about an unforgettable moment he had with DMX in the studio while recording a freestyle.

The Melvins talk about their terrible luck during a 1986 tour.

Pharoahe Monch shares a story of going to a party and feeling like he’s looking fresh until he runs into Kanye West.