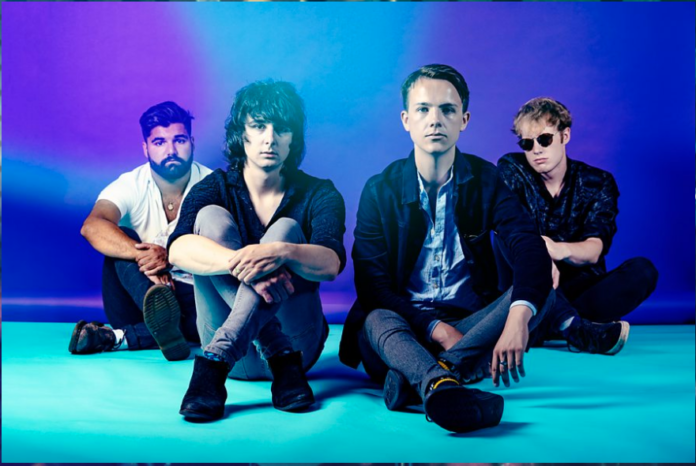 Himalayas are a fast rising young band from South Wlaes who take on the Manic Street Preachers mantle of intense yet populist melodic indie rock. This is a sound that will fill stadiums when they are open again. John Robb caught up with the band here…

Himalayas are a four-piece garage rock band from Cardiff who have spent the last few years honing their sound and style. Heavy guitar lines, dual vocals and huge anthemic hooks hold and captivate audiences old and new. Having played at countless festivals, sold out local venues and received an impressive amount of radio and international interest they move forward in 2020 with a new single We Love To Hate out July 3 rd . The track is produced by Steffan Pringle (Estrons).

The band, who consist of Joe Williams (lead vocals/guitars), Mike Griffiths (guitars/vocals) and Louis Heaps (bass) met at school and bonded over their love of bands like The Strokes, Queens Of The Stone Age, Muse, Royal Blood and Manic Street Preachers.  Drummer James Goldbourn moved to Cardiff from Dubai and found like-minded souls in the trio to complete the line up.

Releasing their first tracks in 2017, they were quickly picked up by the likes of Huw Stephens, Greg James and Clara Amfo at Radio 1 alongside Gordon Smart (Radio X), Edith Bowman (Virgin Radio) and over in the states on Jason Kramer (KCRW). Tracks including the single, ‘Thank God I’m Not You’ have amassed an incredible number of streams on Spotify, tipping 21 million and counting.

They have also been featured on key playlists including the influential Walk Like A Badass.
On the live front, in the last year they have performed on the Festival Republic stage at the Reading & Leeds Festival, SXSW, as well as Mad Cool Festival, Festival No. 6, The Great Escape, Isle of Wight, YNot, Truck, Tramlines, All Points East and an array of headline shows as well as supporting Kaiser Chiefs, Gang of Youths and Marmozets.