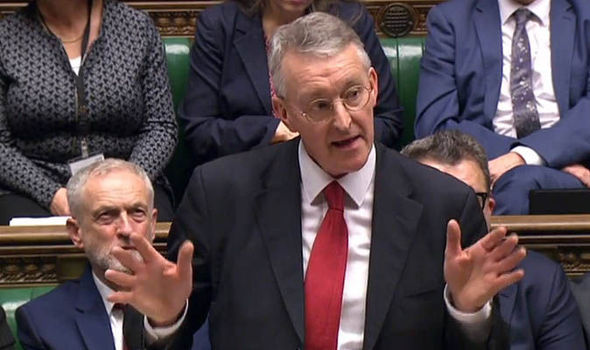 Hilary Benn’s impassioned speech won over new admirers from all sides of the house (aside from the ‘terrorist sympathisers’). It was a camp performance of measured oration, Shakespearian in scope and Grecian in its foreboding. But what about its content?

Comparing bombing campaigns in Syria to joining the International Brigade in the Spanish Civil War is a very ominous parallel. Especially when you consider that it was the Nazi’s who led the aerial attacks in Spain which became the prelude for WWII. But of course – now isn’t the time for history lessons, now is the time to wrap ourselves in the flag and write obituaries onto the side of precision strike missiles. After all, we are under attack.

For a lot of people, rejecting last night’s vote was not about pacifism (the new extremism), they were rejecting the notion that Britain should bomb for bombing’s sake with no discernible plan, just so politicians can grandstand on the world stage. For many others, the shame of past British involvement in the Middle East is enough reason to stay well away and instead chase and stifle the money trail right back to the Saudi’s, Turks and of course the weapon selling Brits (spoiler – I’m in that camp). Nevertheless, there are valid arguments for some military action. Just not from the Xbox controlled drones of the RAF.

There have been a number of Westerners going to fight alongside the Kurds, including ex British serviceman and British Muslims. Crucially, their presence has been ignored in the hysteria of the press, who seem intent on giving the crusading narrative of East against West a basis in fact. Kurdish forces have been requesting airstrikes from Western powers for the past 6 months. They protect a border of around 650 miles and there’s a strong case that they should get the support they need. Nevertheless, there are few targets left that Assad’s barrel bombs and Russian and US airstrikes haven’t vaporised already. Do Britain honestly think more bombing will help ordinary Syrians when they already have that to contend with? Last time I checked there was also a global refugee crisis to sort out and more destabilisation doesn’t seem like such a wise move. Then again, a week is a very long time in politics.

Last year, a group of misguided schoolgirls fled the country to eat Nutella with jihadists drawing the full ire of the nation’s press. In the same week, a 17 year old from Tottenham called Silhan Ozcelik was stopped en route to Turkey, trying to join the PKK (Kurdistan Workers Party) but there were few column inches devoted to her. That’s the same PKK who have kicked seven shades of shit out of ISIS wherever they’ve crossed them. They’re also the same PKK that are on the British terror threat list because Turkey, a British ally, likens all Kurdish forces to revolutionary insurgents. She was detained upon her return and has been in Holloway prison ever since. If this was the 1930’s she might have been commended by Orwell and Hemmingway for standing up to the ‘denial of human rights and for justice’. Instead she’s branded a terror threat which is why the double standards are so baffling.

The truth is that as a nation we make nothing but weaponry and trouble for ourselves. Since the decimation of our industries (thanks again Maggie), our trading friendships have blossomed with unsavoury states that boast dubious human rights records. These include the greatest exporter of Wahhabism and our strongest regional ally in the fight against Wahhabism – Saudi Arabia. For David Cameron to fly the flag at half-mast when King Abdullah died and then turn around accusing people of harbouring terrorist sympathies is the height of double speak. Whenever he is on a peace envoy in the Middle East, he is with an aide from BAE Systems whose briefcase holds a catalogue listing the best toys of torture and high grade weapons that dictators can buy. Toys that then find themselves in the hands of a whole range of nutters – ISIS amongst them. Two years ago, the motion to bomb Syria was defeated which has saved Cameron considerable embarrassment seeing as though ISIS would have been part of the moderate rebel groups that Britain had promised to arm. We can only assume the 70,000 he speaks of now won’t be quite so moderate.

What good does British involvement do to the situation when allies are interwoven with enemies?  (We are not at war with Eurasia, we have never been at war with Eurasia).This conflict has too many sides with opposing purposes and to jump in the midst of that without reaching a consensus risks more proxy wars. It’s not a stretch to suggest that many politicians already know this. The arms and private defence agencies are the biggest, recession proof industries in the world with a big enough trough to accommodate anyone willing to be lobbied.

For MP’s to sanction these air strikes claiming moral justification was so disingenuous that they couldn’t even disguise their glee when the vote passed. Whatever your stance on last night’s decision, it’s hard to not feel repulsed when several hundred honourable gentlemen, erupt in rapturous applause after what they considered to be a game, set and match speech. These are politicians who previously claimed to have agonised over their decision, taking nothing lightly and yet such sombre tones seem at odds with their raucous one-upmanship on the backbenches. These are the moments they live for, to have their names written into the annals of history – the pen pushing Rambo’s of the upper echelons. The hands that sign the paper to fell a city, then point the finger at refugees when it’s no longer viable to say we’ll protect them. Last night illustrated a lust for self-aggrandizing which becomes undeniably apparent whenever they get a sniff of blood and oil. They may have enjoyed the theatrics of Hilary Benn’s speech but they will never be like the International Brigade – because a vote of conscience is wasted on people without one.