Jamie Havlin gives his thoughts on one of the most influential and iconic Westerns ever made.

High Noon opens with a three menacing looking men loitering at a station. They’re waiting for the arrival of a train carrying their buddy Frank Miller, a cold-hearted killer with revenge on his mind. He’s due to arrive at noon.

Meanwhile, small town Marshal Will Kane (Gary Cooper), is being married to Amy (Grace Kelly). After the ceremony, the couple will be leaving their home town of Hadleyville to start a new life.

He’s been the best Marshal that the town has ever employed and he’s even reluctant to hand in his Marshal’s badge one day before his replacement is due to arrive, but is assured that Hadleyville will be safe for one day without him.

So of course, we know it won’t be. 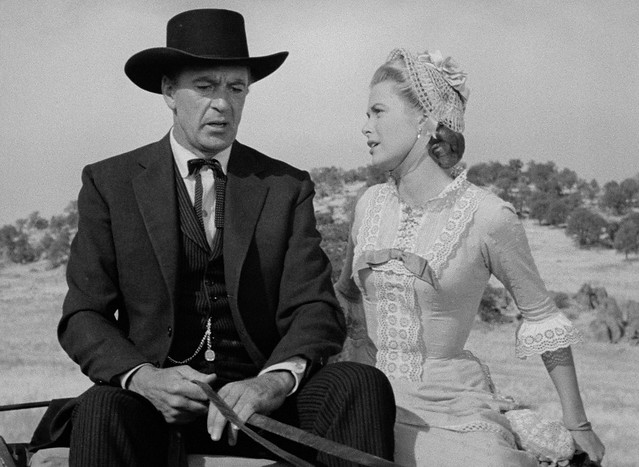 Kane’s plans to ride off with Amy to start a new life are derailed when he learns that Miller has been released from prison unexpectedly and is vowing to kill him. Morally, Kane feels he has to confront his nemesis and save the town from the fate it suffered before he ensured that Miller was jailed, a time when Miller and his trigger-happy gang ran the town.

All Kane needs to do is persuade some of the townsfolk to form a posse and to help him confront Miller. The problem is that the only volunteers willing to join him are either too old or too young to be of any real assistance.

And the clock is ticking.

High Noon is, of course, a film where clocks play an important role. It’s routinely claimed that the film proceeds in real time, which isn’t technically true, although most of the action does unfold in real time and this heightens the tension the nearer we get to noon. 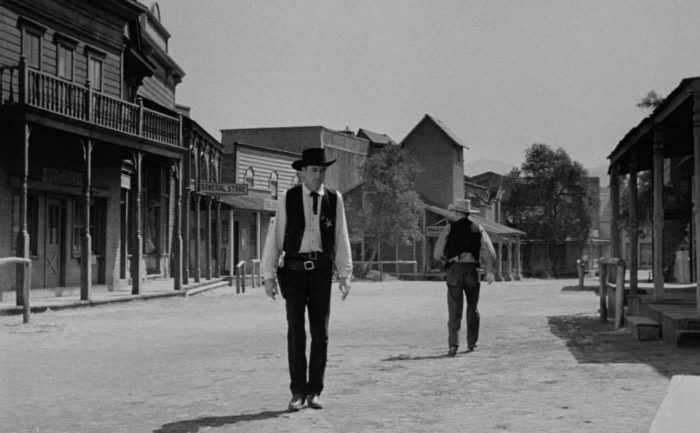 In many respects, High Noon isn’t a traditional western. If you crave plenty of shoot ’em up action, then this might not be for you (although you would likely love the climax). Neither is this is a must-watch for fans of glorious western vistas shot in Technicolor. Not that it doesn’t look great, cinematographer Floyd Crosby (the father of David Crosby) giving the film a crisp pseudo-documentary look.

High Noon has a simple but highly effective plot, a taut screenplay by Carl Foreman, and a standout performance from a laconic Gary Cooper, which deservedly earned him an Oscar. Again, in standard cowboy films of the era, the hero would entertain no doubts about taking on any bad guys but Kane admits that he was tempted to run away. Cooper conveys his inner conflict perfectly.

The film was nominated for seven Academy Awards and won four – in addition to Best Actor, its Editing, Music-Score, and Music-Song were also winners – although Tex Ritter‘s theme song The Ballad of High Noon (Do not forsake me, Oh My Darlin) is overused.

Not everyone was a fan. One of the extras on this package mentions that some Ku Klux Klan members picketed the movie. So it must have been doing something right.

John Wayne and director Howard Hawks were vocal critics, judging it ‘un-American’, and seeing it as a thinly veiled allegory for McCarthyism, in an era when the country was being scoured for Communists or their sympathisers, Carl Foreman and Floyd Crosby among them. Indeed, just as he was finishing off his screenplay, Foreman was subpoenaed to appear before the Un-American Activities Committee where he would face his personal version of High Noon.

He refused to name names, was branded a ‘hostile witness’ and blacklisted in Hollywood while the cameras rolled on the film he penned.

This Eureka release from a 4K restoration, will be the first time High Noon has been available on blu-ray in the UK.

For more on the film: https://eurekavideo.co.uk/movie/high-noon-limited-edition/