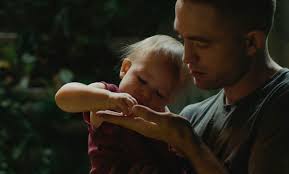 Release: Now showing at Home, Manchester and on general release

Claire Denis’ surprising and often shocking narrative thrusts a group of criminals deep into space on an interstellar suicide mission.  Lee Ashworth hitches along for an uneasy ride.

Despite its moments of extremity, High Life is a subtle knife of a film.  It’s complex.  To say the least. It possesses some of the grace, the spaciousness and certainly the languor recognised as hallmarks of serious sci-fi such as Solaris (1972) and 2001 (1968), coupled with an absence of belligerent intergalactic aliens.  Yet it also presents something of a masterclass in subverting one’s expectations of the genre, and perhaps more widely, of narrative intent in general.

Robert Pattinson’s monk-like Monte emerges as a resourceful and resilient convict amongst a group whose cells have been switched from Death Row to the claustrophobic interior of a space ship on a scientific suicide mission from Earth.  Whilst searching for black holes in order to extract their energy, the crew are preyed upon by Dr Dibs (Binoche), who uses them in her quest to create new life via artificial insemination.

The sequencing of the narrative is fractured and at the start of the film we see Monte raising a baby girl, seemingly alone, on the space ship, battling to conserve vital resources.  The majority of the story reveals how they came to be in that position, while the final part offers us a glimpse of the next phase of their journey.

Pattinson and Binoche may take the plaudits for two diametrically opposed performances: the former of great reserve and subtlety, and the latter of uncharacteristically unfettered monstrousness.  Yet, Denis has assembled a fine cast, with Mia Goth’s performance as the unpredictable, damaged and violent Boyse most memorable in a challenging role, and Jessie Ross’ late appearance as Willow demonstrating how to create a fully realised character with little screen time.

For long tranches of this film it appears that there is nothing redeemable.  Denis brings everything down to its lowest common denominator.  The ship itself is fully appropriate for its function, appearing like an outsized shipping container hulking through the cosmos.  Its cargo is, according to the Earth-bound justice system from whence it came, the very worst of humanity, incapable of redemption, oblivious to reform.  Through the grim longeurs of galactic travel, reflecting on the probability that this mission represents the farthest from Earth that humankind has explored, the realisation that this dysfunctional crew are our representatives is to encounter despair on a truly cosmic scale.  I had to remind myself that this is not representative of the human race per se, that we are not totally damned in our moment of great pioneering achievement.

But whereas it is easy to lose patience with a one-dimensional cul-de-sac of a narrative whose engine debases everything… there is also the nagging feeling that Denis has hit the mark in so many ways in terms of her treatment of the human race.  Her characters bring to the fore the dark desires, the traits and actions we would happily wish away from our species, all the things we do not want to admit.  And in her grimy, grubby way she reveals them to us, illuminating them on the screen.  This is a film that explores the depths of the human soul and portrays it as an odyssey through space travel just as Kubrick and Tarkovsky did, yet with a different focus on what it means to be human.  By sending us out of our Earth-bound home, alienating us in space flight, by boiling down our relations to each other in a high-pressure, sterile and claustrophobic environment, Denis can truly pose the question: who do we think we are?  Ape, human, space explorers?

We are searching through space on an interstellar quest: but where do Denis’ sympathies lie? Where do our sympathies lie as an audience? Denis shows herself to be more risqué as an artist in this respect than she does in the ‘shocking’ nature of the ostensible plot points that centre around the actual sex and violence that conjoins this motley crew. There is something deeply Nietzschean about High Life.  There is the recurring snippet of black and white film, appearing to show a volcanic eruption beyond a recumbent person.  Here again, though not through individual volition, we find humanity in the collective sense ‘building its house on the side of a volcano’, trying to somehow affirm its existence and progress in the face of mortal danger.  Nietzsche problematised our condition as a species as a moment of becoming – the human being constituting a tight-rope between ape and übermensch. Nietzsche’s legacy has been one of uncomfortable interpretation and his writings seem to contain within them the very crux of the conflict between humanism and anti-humanism.  A lot rests on who or what the übermensch is.  For Denis, the question is the same: who are her space explorers? In which direction is the line of flight?

At a time when humanism itself is in peril more so than it has been in many decades, the question of whether High Life is a humanist film or not, is only one of the reasons that make it a difficult watch.  It lacks insight into the personal dynamics of the crew, yet its curiously meditative quality interspersed with moments of extreme and graphic vigour treads a strangely fine line between minimalism and gratuitousness.  Despite all the scenes of masturbatory compulsion, a sense of emptiness pervades the halls of the ship. More of a pay-off seems inconceivable without falling into a conventional narrative resolve, which is to Denis’ credit – but High Life, for all its compelling brilliance, is a film in need of one further killer idea to elevate itself into the pantheon.