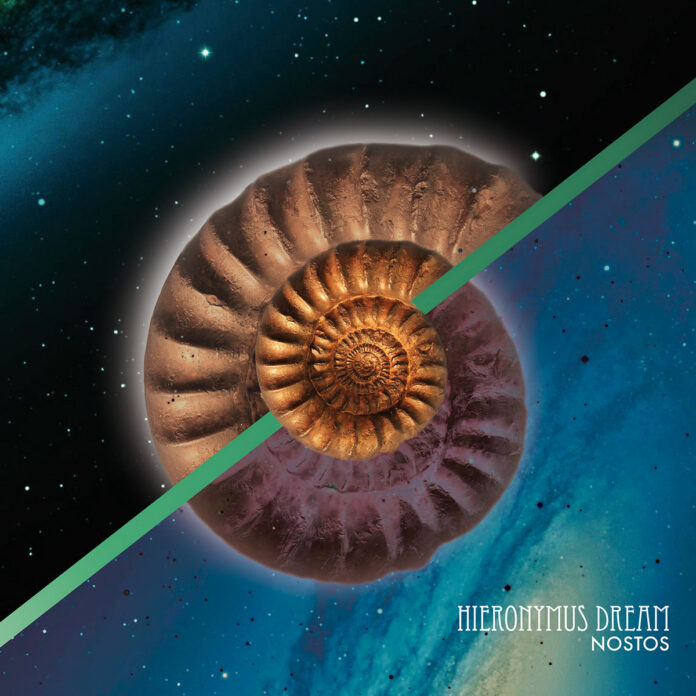 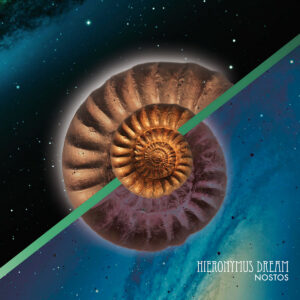 VINYL due in November HERE

Andy Brown goes on a mythological quest from the comfort of his own home with Hieronymus Dream and their latest psychedelic opus, Nostos. He shares his thoughts for Louder Than War.

In this age of excess information, there’s something comforting about a band like Hieronymus Dream. A five-piece from Rhodes, Greece who let their sprawling, instrumental psychedelia do the talking. You can find the band on social media yet you won’t find a biography or even their names. The only band photo shows the collective as silhouettes on a hillside. It makes Nostos feel like an album you’ve stumbled across in a second-hand record shop. You picked it up because you liked the cover and the guy behind the desk insists it’s, “pretty out there”. The guys at Weird Beard specialise in this kind of release.

Our journey begins with the sublime Odysseus Raft. The title is a reference to Homer’s epic poem Odyssey and the Greek mythological hero Odysseus. Our hero escapes from the isle of Calypso on a raft, only to see it shattered by the pesky, pitch-fork-wielding sea god Poseidon. The music reflects this sense of scale with an immersive kosmische sprawl of bubbling synths, hypnotic drums and intricately interwoven guitar and bass. That tantalising sense of adventure runs throughout Nostos. The album title itself is a reference to Ancient Greek literature and a hero’s return journey. For an LP without any vocals, there are more literary references here than your average public library.

The Island Of The Lotus Eaters arrives next with 7 minutes of pulsating, synth-heavy psychedelia. The track’s title refers to another part of Odysseus’ epic journey; an island where the locals are kept in blissful, intoxicated ignorance by the addictive and sedentary properties of the lotus plants. Odysseus’ men are nearly trapped on the island after feasting on the fruit. Naturally, our hero escapes. The narrative works beautifully with the lush, mesmeric wall of psychedelia bleeding through my headphones. The prog-rock guitars, juddering bass and motorik beat keep me thoroughly hypnotised as I greedily consume every note. The musicianship is staggering throughout: you’re in safe hands with Hieronymus Dream.

The faintly funky undercurrents on Circle’s Secret continue to propel the album forwards; providing the sonic wind in our sails as we drift through the legendary landscape. The layers of 70s synths, driving bass and shimmering, post-rock guitars combine to make a wonderfully heady experience. Scylla and Charybdis then proceeds to send us further down the rabbit hole. The title refers to an idiom drawn from Greek mythology, equating to the phrase, between a rock and a hard place. The names also refer to two mythological monsters. Close your eyes and picture Ray Harryhausen’s finest creations and you’ll get the idea. The tracks tumbling bass, epic drums and ominous guitar create a suitable sense of adventure and imminent danger.

Uranometria comes next and finds our intrepid 5-piece in full flight. The title refers to a 17th century star map and finds the band reaching for the heavens with a masterfully delivered blast of explosive psych-rock. Land of Vraltar see’s us through the home stretch with a breath-taking 9-minute epic. The bass provides a heart-racing pulse that runs through the track’s dramatic and ever-shifting soundscape. The band can rest easy knowing they’ve created an album that goes toe-to-toe with its influences. Fans of Neu, Tangerine Dream and the Far East Family Band will find plenty to love. Hieronymus Dream are the kind of act you’d expect to discover while leafing through a Julian Cope book about underground psychedelia. I’m pretty certain the arch druid of musical esoterica would heartily approve.

You can find Hieronymus Dream on Bandcamp and Facebook.